Bengals' momentum halted ahead of matchup with Browns 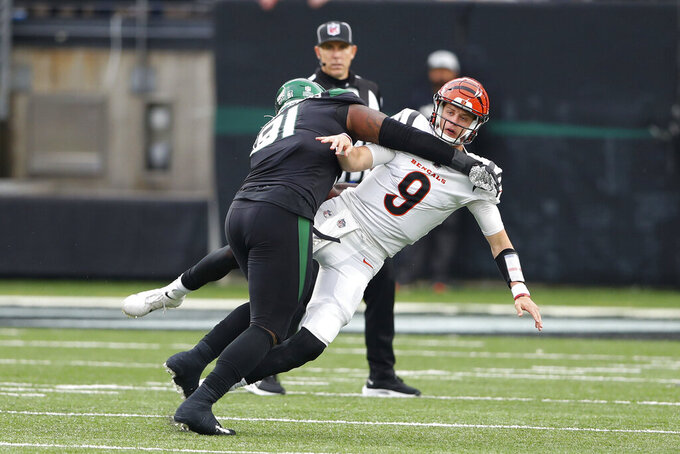 CINCINNATI (AP) — Maybe the Cincinnati Bengals spent a little too much time patting themselves on the back after blowing out the Ravens.

Maybe they were looking ahead to the important division matchup with the Browns.

Maybe they thought the New York Jets wouldn’t put up much of a fight.

Whatever the reason, the previously one-win Jets brought the Bengals' momentum to an abrupt halt with a 34-31 upset Sunday, a head-scratching underperformance for a Cincinnati team that came in at 5-2 and seemed to be displaying the look of a playoff contender.

“This was always in the back of your mind coming off a (41-17) win against Baltimore, and we spent a lot of time making sure that we were focused,” Cincinnati coach Zac Taylor said. “Because I was looking for any warning signs that this would appear during the week, and I didn’t see any.

Now with four games remaining against AFC North rivals, and the Raiders, Chargers and Chiefs also on the schedule, the Bengals have raised the same old doubts over whether they can be consistent enough to remain relevant throughout the regular season.

“The NFL season is like a wave, you’re going to ride it up and down,” receiver Tee Higgins said Monday. “You just have to be able to stay on that board and just keep going.”

Against the Jets, the Bengals defense played its worst game so far. They allowed 511 yards to the league's worst offense, including 405 yards and three touchdowns to Jets backup quarterback Mike White in his first career start. Cincinnati was unable to hold a two-score lead in the fourth quarter.

The Bengals are still moving the ball and scoring behind quarterback Joe Burrow, who was 21 for 34 for 259 yards and three touchdowns. He's third in the NFL in touchdowns (20) and fifth in passing yards (2,215).

The Cincinnati defense came in as the 10th-best in the league and had been sharp in recent weeks. Against the Jets, the Bengals had several missed tackles that allowed New York to go on long drives. White picked apart the linebackers with intermediate passes. The Bengals just couldn't stop the Jets when it mattered most.

Higgins, a second-year receiver who has been overshadowed by rookie Ja'Marr Chase this season, had four catches for 97 yards. He had catches of 26 yards and one for 54 yards, both of which set up Cincinnati touchdowns.

Chase, who came in as the Bengals leading receiver by far, was targeted nine times but made only three catches for 32 yards, including a 2-yard TD pass in the second quarter. He also dropped a first-half touchdown pass on third-and-goal from the 1-yard line. Burrow was sacked on the next play, and Bengals failed to score.

Right guard Jackson Carman left in the fourth quarter with a back injury. Taylor said it's not serious and Carman is day to day.

82.2 — White's completion rate against Cincinnati's defense. He was in the game for injured starter and No. 2 overall draft pick Zach Wilson.

The Bengals are 5-3 and still in good shape if they can put the Jets game behind them quickly. They have six of their final nine games at home, starting with the Browns (4-4) on Sunday. Cleveland is coming off a 15-10 loss to the Steelers.

“It was a kick in the gut," Bengals safety Vonn Bell said. “But we get a nice opportunity this week as a big divisional week and have a chance to go 3-0 in the division. So get your mind on fire for that.”