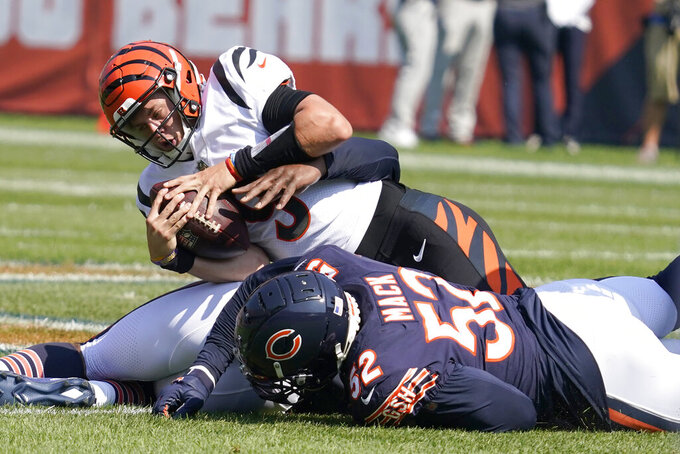 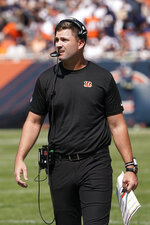 CINCINNATI (AP) — After an exhilarating overtime win in Week 1, the Cincinnati Bengals took a step backward.

Offensive line issues stalled the running game and made for a long Sunday afternoon for Joe Burrow, who set a career high in passer rating (128.8) and threw a pair of touchdown passes the previous week.

The Bengals (1-1) put themselves in a hole against the Chicago Bears and, despite a late push by Burrow, ran out of time in a 20-17 loss.

Burrow threw three interceptions on consecutive pass attempts — the third was tipped at the line — and then tossed touchdown passes on two straight fourth-quarter attempts. A third-quarter Tee Higgins fumble led to a Chicago field goal.

Burrow was 19 for 30 for 207 yards and two touchdowns, numbers that may have been good enough to win if not for the turnovers.

“We’re going to play a lot of great defenses in this league, and we feel like we’ve got a really good offense and a really good defense, and we just got to do a better job playing complementary football and winning these road games,” Taylor said.

Bengals receivers. Tyler Boyd was targeted nine times and made seven catches for 73 yards, a 10.4-yard per-catch average. Rookie Ja'Marr Chase — who had five receptions for 101 yards and a touchdown against the Vikings — caught only two passes Sunday, but one was a 42-yard TD strike. Tee Higgins had six grabs for 60 yards and a touchdown.

Offensive line coach/run-game coordinator Frank Pollack. Burrow rarely had a pocket long enough to look downfield, a familiar situation from last season before he went down with the knee injury in Week 11. Pollack was supposed to fix pass-protection issues that plagued the Bengals. He's still got work to do. Burrow has been sacked nine times in two weeks and is already getting nicked up.

Same as ever: Try to keep the franchise quarterback upright and give him time to throw to his talented receivers. That won't get much easier when the Bengals travel to Pittsburgh to take on the Steelers (1-1). Pittsburgh lost to the Raiders 26-17 on Sunday.

“Obviously one of the better teams in the league, so we got to come with our big boy pants on and ready to play,” Burrow said.