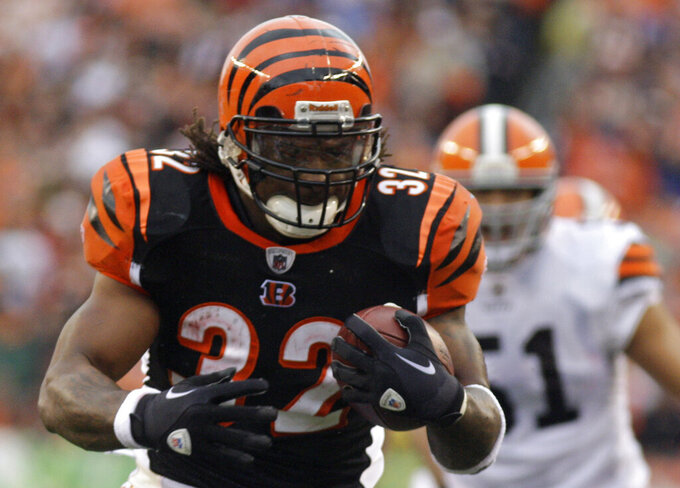 FILE - In this Nov. 27, 2011 file photo Cincinnati Bengals running back Cedric Benson runs for a touchdown in the first half of an NFL football game against the Cleveland Browns in Cincinnati. Benson, one of the most prolific rushers in NCAA and University of Texas history, has died in a motorcycle accident in Texas, Saturday, Aug. 17, 2019. He was 36. (AP Photo/David Kohl, file)

STRENGTHS: Joe Mixon and Giovani Bernard form one of better running back tandems in the league. Mixon led AFC in rushing last season with 1,168 yards, and Bernard caught 35 passes for 218 yards despite being limited by a knee injury. When A.J. Green returns from ankle surgery, Bengals will have diverse group of receivers for Andy Dalton, who enters pivotal season with new head coach. Defensive line is deep and anchored by end Carlos Dunlap and tackle Geno Atkins. Secondary returns all starters.

WEAKNESSES: Offensive line is again work in progress that could undermine everything. Bengals drafted Williams in first round to start at left tackle, but shoulder injury will sideline him for season. Boling, starting left guard for last seven years, retired shortly before start of camp because of blood clot. Center Billy Price has been limited by foot injury. Linebacker position also is huge concern and in transition after parting with trouble-prone Burfict.

FANTASY PLAYERS TO WATCH: Mixon and receiver Tyler Boyd. With Green sidelined, Bengals will likely give ball to Mixon and throw to Boyd quite often. Boyd had breakout season in 2018 after Green suffered toe injury, catching 76 passes for 1,028 yards and seven touchdowns. He'll be primary target again at outset.

EXPECTATIONS: It'll be transitional season in Cincinnati with new coaching staff and roster that finished last in AFC North. Bengals haven't finished last in consecutive seasons since 2001, when they tied with Jacksonville for last in AFC Central, and 2002, when they were alone at bottom of AFC North, so that's measuring stick. They still haven't won playoff game since 1990 season, tied with Washington for fifth-longest streak in NFL history. There's little reason to think that will change in Taylor's first season as NFL head coach.