Bills, Allen hoping to get back on track vs. White-led Jets 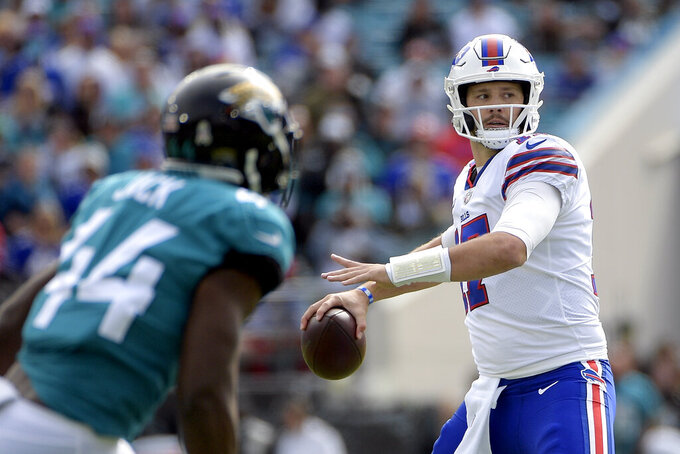 BETTING LINE: Bills by 13, according to FanDuel SportsBook.

TURNOVER DIFFERENTIAL: Bills plus-11; Jets minus-12.

BILLS PLAYER TO WATCH: TE Dawson Knox. He has a chance to return after missing two games with a broken right hand, and leads Buffalo with five TD catches this season.

JETS PLAYER TO WATCH: QB Mike White. The backup is the starter for the third straight game in place of the injured Zach Wilson, whose sprained right knee ligament is still healing. White has shown an ability to smoothly run Mike LaFleur's offense and make it look productive, so a good showing against the Bills might keep him in the huddle for at least another week.

KEY MATCHUP: Jets D-line vs. QB Josh Allen. New York is ranked last in the NFL in overall defense, and the defensive line — supposed to be a strength — has struggled the last few weeks. The Jets will need to try to contain Allen up front with pressure from the D-line, which can't give the Bills QB time or he'll throw and/or run all over them.

KEY INJURIES: Bills LB Tremaine Edmunds was ruled out after not practicing this week following a hamstring injury against Jacksonville. ... RB Zack Moss was in concussion protocol early in the week and was listed as questionable after practicing on a limited basis Thursday and Friday. ... WR Cole Beasley has been playing through a rib injury. ... Rookie RT Spencer Brown may return after missing two games with a back injury. He fully practiced Thursday and Friday. ... Starting G Jon Feliciano will miss at least two more games with a calf injury. ... Jets RB Tevin Coleman (hamstring) and WR Corey Davis (hip) are set to return after missing the last few games.

SERIES NOTES: The AFC East rivals have played close games lately, with their last five games each being decided by 10 points or less. ... The Bills swept the season series last year, the first time either team did that since the Jets in 2016. ... The teams have faced each other once in the postseason, an AFC wild-card victory by the Bills in 1981. ... Buffalo hasn't allowed a 100-yard rusher by New York since Matt Forte in 2016. ... Tyler Bass accounted for all the points the Bills needed in the teams' last matchup last year, kicking six field goals at MetLife Stadium.

STATS AND STUFF: The Bills are looking to bounce back after a dreadful loss at Jacksonville last weekend, when Allen threw two interceptions and lost a fumble during Buffalo’s first four series in the second half. ... Allen finished 31 of 47 against the Jaguars but only for 264 yards — the fourth time this season he has been held under 300 yards passing with 30 or more attempts. Last season, it happened only four times overall. ... The Bills failed to score a TD last week, marking the first time that's happened since their 18-10 win over the Jets last October. ... Buffalo generated just 17 first downs, ending a 23-game run of 20 or more, which stood as the NFL’s longest active streak since New England had a 24-game run spanning the 2016-17 seasons. ... The Bills have held opponents from converting 50% percent or more of their third-down chances in 12 straight games. It’s Buffalo’s longest stretch since a 14-game run spanning the 2018-19 seasons. ... The Bills haven’t allowed a TD pass in three straight games, matching the team’s best stretch since the first three games of the 2017 season. The last time Buffalo didn’t allow a TD passing in four or more straight games was a four-game stretch in 2014. ... The Jets will try to bounce back from the 45-30 loss at Indianapolis during which White was hurt in the first quarter. Josh Johnson replaced him and put up career highs with 317 yards passing and three TDs. White is healthy, and Joe Flacco — acquired from Philadelphia after Wilson's injury — will be the backup. ... After failing to score in the first quarter of its first six games, New York has done so in each of its last two. LaFleur's offense has been productive in the last two games, scoring 64 points and rolling up 997 yards. ... Rookie WR Elijah Moore had the first two TD catches of his career against the Colts and has 13 catches for 151 yards in his last two games. ... The Jets have allowed an average of 463 total yards over their last four games, and that includes a solid performance (318) in a win over Cincinnati. ... New York is coming off a performance in which it allowed the Colts to run for 260 yards, the most by any team this season.

FANTASY TIP: Bills RB Devin Singletary should probably be in your lineup as an RB2 or RB3. Against what has lately been a porous Jets defense, Singletary should find some room to run while adding some catches out of the backfield. He hasn't scored since Week 2, but could find the end zone in this one.