Bills and Giants trying to shake off NFL also-ran labels 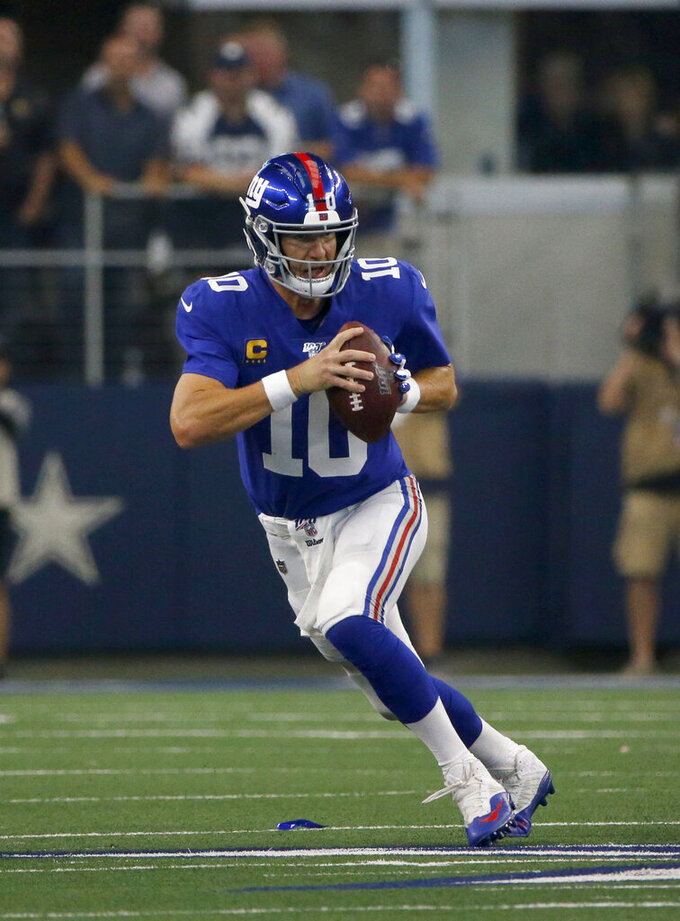 New York Giants quarterback Eli Manning (10) scrambles out of the pocket before throwing a pass in the first half of a NFL football game against the Dallas Cowboys in Arlington, Texas, Sunday, Sept. 8, 2019. (AP Photo/Michael Ainsworth) 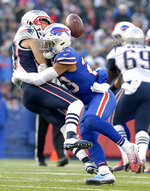 EAST RUTHERFORD, N.J. (AP) — The Buffalo Bills and New York Giants have been among the NFL's also-rans for a while, and it's hard to believe things are going to change a week into the season.

The Bills (1-0) beat the Jets 17-16 in a game most felt Buffalo was lucky to win after coughing up the ball four times and falling behind 16-0 late in the third quarter.

After going undefeated in the preseason, the Giants (0-1) had a clunker in the opener at Dallas and were thrashed 35-17.

The two playoff long shots will meet Sunday when the Bills return to MetLife Stadium with Buffalo looking for its first 2-0 start since 2014 and the Giants trying to avoid a sixth 0-2 start since 2013.

Each team has made the playoffs once since 2012: New York in 2016 and Buffalo the following year, ending an 18-year drought. Neither lasted long in the postseason.

And neither is making much of the openers.

Giants quarterback Eli Manning said no one is panicking.

"There is always urgency, you have to understand the difference between stressing and forcing, and urgency," he said. "I think it's still a matter of having great preparation, great work; it starts on the practice field. Understanding the game plan, going out there and executing."

The Giants did a good job on offense in the opener, gaining 470 yards, with Manning throwing for 306 yards and a touchdown. The negative was converting 2 of 11 on third downs and having the defense give up 494 yards as Dak Prescott threw four touchdown passes.

The Bills allowed 223 yards to the Jets and the offense rallied behind Josh Allen late to win.

Here's what to watch Sunday:

If Allen needed extra motivation to keep the Bills undefeated, Giants coach Pat Shurmur may have supplied it early in the week.

When asked his thoughts on Allen prior to the 2018 draft, Shurmur said he believed Allen had the chance to be an NFL starter. Not a glowing assessment of the No. 7 overall pick. The Bills put up the comment in their locker room.

The Giants could be hurting at wide receiver. Golden Tate III is serving the second of a four-game suspension for violating the policy on performance enhancers. Sterling Shepard, envisioned as the go-to guy after Odell Beckham Jr. went to Cleveland, is out with a concussion. Fellow starter Cody Latimer is questionable with a calf injury. That leaves veterans Bennie Fowler, Russell Shepard and Cody Core to carry the load along with recently re-signed TJ Jones and tight ends Evan Engram and Rhett Ellison. Engram had career bests of 11 catches and 116 yards and scored a TD against Dallas.

Buffalo's defense rescued Allen after his four turnovers, including a pick-6. The Jets combined for one first down and 33 net yards offense immediately following the Bills' three turnovers — and 223 yards overall. That's a carryover from last year: Over the final seven games, Buffalo allowed 17 points (one an interception return for a TD) off 10 turnovers.

The big question around the Giants this week was whether halfback Saquon Barkley got enough touches. The 2018 Offensive Rookie of the Year kicked off his second season with 11 carries for 120 yards and four catches for 19 yards. Many felt that wasn't enough for a player described as a generational back.

"If we play better than what we did last game and execute when we need to execute, I don't think the conversation will be 15 touches if we find a way to win," Barkley said.

Defensive coordinator James Bettcher and his unit are on the hot spot after giving up 494 yards and 35 points to the Cowboys. There were just too many blown coverages, missed tackles and little mistakes to go along with Bettcher's own ill-advised calls.

New York was ranked 30th in the league after the first game, including last in pass defense after giving up 405 yards.

"I won't panic, never panic," Bettcher said. "I will not panic, nor will our players."