Bills' defense refuses to flinch in face of adversity 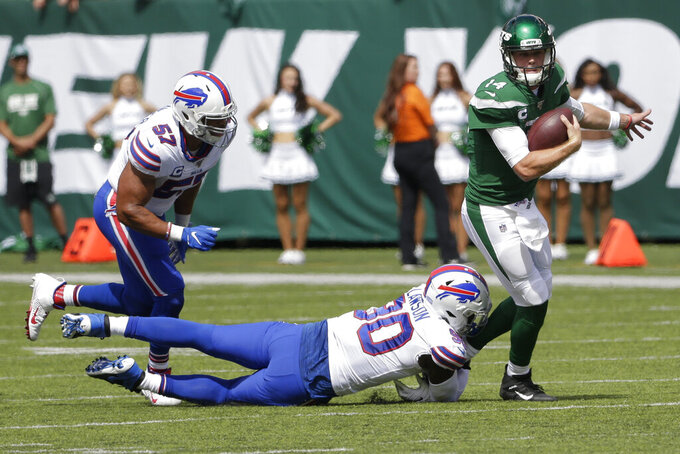 Neither did his players, 10 of them returning starters, who rose up in the face of adversity to play a key role in the Bills' stunning come-from-behind 17-16 win over the New York Jets.

Though quarterback Josh Allen gets credit for rallying the Bills to overcome a 16-0 deficit over the final 19 minutes, Buffalo wouldn't have been in a position to win if not for its defense. Buffalo limited the Jets' offense to no points off of the Bills' three first-half turnovers — and eight points overall. New York's other points came off linebacker C.J. Mosley's interception return and a safety.

"Our defense didn't flinch," Frazier said Monday. "Those guys stayed locked in and just concentrated on what they had to do and kept the game manageable, and we found a way."

That was a significant turnaround from a year ago, when a comedy of errors — including two interceptions by Nathan Peterman — had the Bills trailing 26-0 at halftime of an eventual 47-3 loss at Baltimore.

Frazier credited coach Sean McDermott for putting the defense in various adverse situations throughout the offseason to see how the players would respond.

"Sean did a great job throughout the offseason of . . . making us have to deal with some situations where sometimes you're like, 'Is this really going to happen,'" Frazier said, without going into detail. "I felt very confident that we weren't the same group."

Buffalo's defense picked up where it left off last year, when it allowed the second-fewest yards in the NFL. The Jets combined for one first down and 33 net yards offense immediately following the Bills' three turnovers — and 223 yards overall.

Ball security. Allen was credited with committing all four turnovers, and he could've had at least one more if Marcus Maye's interception wasn't negated by Darryl Roberts being flagged for defensive holding.

Both interceptions were off tipped balls, including Mosley's pick-6, which bounced off the hands of receiver Cole Beasley. Allen lost one fumble while being sacked and another as a result of an errant exchange with center Mitch Morse, who missed a majority of the offseason due to core muscle surgery and a concussion.

Turnovers were an issue for Allen during his rookie season, when he finished with 12 interceptions and lost two fumbles.

Receiver John Brown, who signed with the Bills this offseason a year after turning them down to sign with Baltimore. He finished with seven catches for 123 yards and scored the deciding touchdown on a 38-yard reception with three minutes left. Brown's 123 yards receiving were the most by a Buffalo player since Sammy Watkins had 154 in a 34-31 loss to Miami on Dec. 24, 2016.

Receiver Robert Foster, who was on the field for just 15 offensive snaps a year after finishing second on the team with 541 yards receiving and three touchdowns.

Starting nickel back Taron Johnson's status remains uncertain after hurting his hamstring in the third quarter. McDermott says WR/KR Andre Roberts is improving after missing the opener with a quadriceps injury.

6 — With 254 yards passing, Allen became Buffalo's first quarterback to top 200 yards in six consecutive games since Drew Bledsoe did that in his first six games with the Bills to open 2002.

It's back to the Meadowlands, with Buffalo preparing to face the New York Giants (0-1). After limiting Jets running back Le'Veon Bell to 60 yards rushing and 32 receiving, plus a touchdown and 2-point conversion, the defense braces for Saquon Barkley. The Giants' workhorse had 120 yards rushing and 19 receiving in 35-17 loss at Dallas.