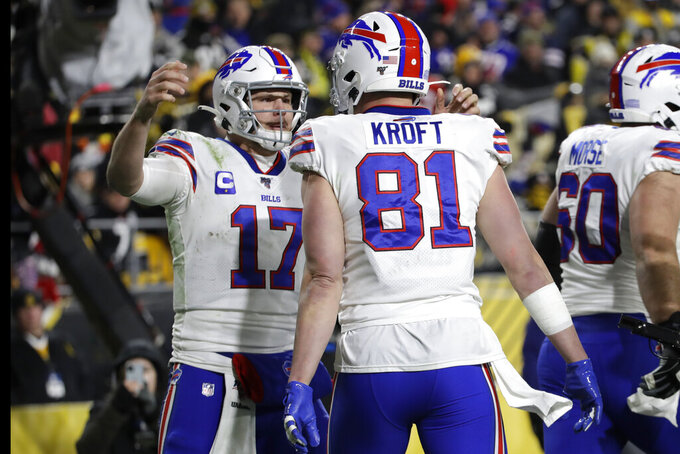 Buffalo Bills quarterback Josh Allen (17) celebrates after throwing a touchdown pass to tight end Tyler Kroft (81) during the second half of an NFL football game against the Pittsburgh Steelers in Pittsburgh, Sunday, Dec. 15, 2019. (AP Photo/Don Wright) 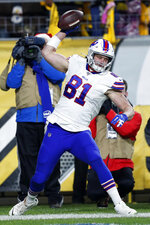 ORCHARD PARK, N.Y (AP) — One of Bills coach Sean McDermott's main priorities upon his arrival was transforming a franchise with a dysfunctional culture and losing history into a team that would one day take the field expecting to win.

Little could have McDermott anticipated one of the more defining moments of his vision turning into reality some three years later in a prime-time showdown between AFC playoff contenders in Pittsburgh, and involve the rock band Styx.

With the score tied at 10 five minutes into the fourth quarter, and the Steelers turning to their theme song of "Renegade" to amp up their Terrible Towel-waving fans in a bid to intimidate their opponents, the Bills were unfazed.

Defensive linemen Shaq Lawson and Jordan Phillips began dancing on the sideline, while backup quarterback Matt Barkley came up to McDermott and, over the din, yelled: "Hey, this is our song."

On the first snap from scrimmage, QB Josh Allen hit John Brown for a 40-yard reception to quiet the crowd. There was even more silence five plays later when, on third-and-9, Allen connected with tight end Tyler Kroft for a 14-yard go-ahead touchdown in Buffalo's playoff-clinching 17-10 win.

"Ah, man, that was awesome," McDermott said Monday of his team's response, and after the coach spent last week replaying the song over the loudspeakers during practice.

"You try to prepare a team as a coach and put them in positions so that the environment is a lot like practice. I didn't expect (the response) to be to that extent" he added. "I think they were so sick of hearing it in practice, quite honestly, that they just tried to flip the switch on me."

These aren't your father's Bills.

Nor is this the 2017 version of the team which required a series of tiebreakers to fall the Bills' way for them to sneak into the playoffs. Cincinnati eliminated Baltimore from contention on Andy Dalton's last-minute touchdown pass to Tyler Boyd.

Leaving nothing to chance, the Bills (10-4) seized the opportunity in their 14th game — the earliest they've clinched a berth since 1991 — while also showing further signs they're much better than the team being second-guessed for taking advantage of a soft early-season schedule.

In winning four of their past five, the Bills have beaten the Cowboys in Dallas on Thanksgiving Day. Their only blemish was a 24-17 loss to AFC-leading Baltimore in an outcome that wasn't decided until Buffalo's final drive ended with an incompletion at the goal line with 63 seconds remaining.

The results have made a believer out of veteran linebacker Lorenzo Alexander, one of just four holdovers from the Rex Ryan-coached 2016 team that extended Buffalo's playoff drought to 17 years.

"Before Sean got here, it was a culture of losing," Alexander said. "You have to intentionally and methodically change the concept of `Oh, here it goes again,' or `We expect to lose.' But it takes time."

Alexander's witnessed the transformation in both the leadership caliber players the team's added through the draft and free agency, and by how McDermott has emphasized his message in most every team meeting or practice.

It's why the playing of "Renegade" was music to their ears Sunday.

"It was just one of those things," Allen said, “Coach McDermott seeing the future and letting us know what was going to happen in certain situations, and we were able to respond.”

Road success. Buffalo improved to 6-1 to match a franchise record for road wins set three times, the last in 1993 — the final of four straight Bills teams to go to the Super Bowl.

Allen's accuracy. In finishing 13 of 25 for 139 yards, the second-year starter sailed two passes intended for Cole Beasley, one of which went off the receiver's fingers and was intercepted. He also bounced a pass to an open Brown over the middle.

Tre'Davious White continues making a case for being the league's top cornerback with his second two-interception game of the season, and upping his total to an NFL-leading six.

Rookie Devin Singletary fumbled twice, losing one, casting doubt on a player who's taken over the lead role ahead of veteran Frank Gore.

8-1 — Bills record when they have the edge in time of possession. Buffalo was 2-8 in that category last year.

AFC East showdown at New England with division-leading Patriots (11-4). Bills are 4-35 in the past 39 meetings, and they've never defeated the Patriots at New England in a game Tom Brady starts and finishes. New England can clinch another division title with a win.