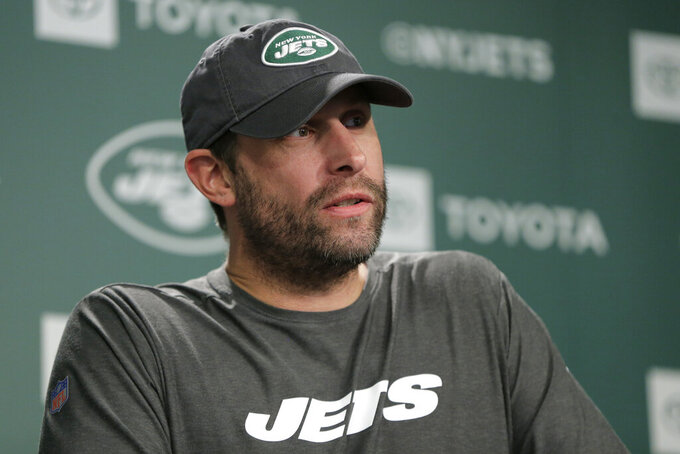 FILE - In this June 4, 2019, file photo, New York Jets head coach Adam Gase talks to reporters at the team's NFL football training facility in Florham Park, N.J. The New York Jets made lots of major changes in the offseason. The Buffalo Bills did, too. The AFC East rivals are looking for much better results this season _ starting with Sunday's opening game at MetLife Stadium. (AP Photo/Julio Cortez, File)

The New York Jets made lots of major changes in the offseason. The Buffalo Bills did, too. The AFC East rivals are, of course, looking for much better results this season — starting with Sunday's opening game at MetLife Stadium.

"Great energy level, love it, but we've got to maintain that and we have to maintain that when there's adversity because in the NFL, it's never going to be smooth sailing," said Adam Gase, entering his first season as the Jets' coach. "Something's going to come up. We're going to lose somebody at some point where it's going to hurt and then the next guy has got to step up and the rest of the guys got to make sure they do their job."

The Jets haven't made the playoffs since the 2010 season, the second-longest drought in team history. They cleaned house from the front office on down through the roster, charging Gase and new general manager Joe Douglas with the task of getting back to the postseason and building a consistent winner.

That process starts with young building blocks such as quarterback Sam Darnold, safety Jamal Adams and rookie Quinnen Williams. The additions of running back Le'Veon Bell and linebacker C.J. Mosley will help things along.

"If you're a champion, if you're a competitor you want to win," Adams said. "I can probably speak for everybody: If you don't make it to the Super Bowl, that's not a successful season. No matter what it is. As a competitor, that's our goal and that's what we're striving for."

For the Bills, they slipped to 6-10 last year after going 9-7 and making the playoffs in Sean McDermott's first season, snapping a 17-year postseason drought.

They enter this season with a revamped offense that includes eight new starters, including four on the offensive line. The only returning starters are second-year quarterback Josh Allen, left tackle Dion Dawkins and fullback Patrick DiMarco.

The Bills' defense, which ranked No. 2 overall last season, returns mostly intact with the only departure Kyle Williams, who retired after 13 seasons. Buffalo filled his spot by drafting Ed Oliver in first round.

"I think there's a lot to prove with the guys that we've got on this team, we're very hungry," Allen said. "We're not going to talk a lot, we're not going to be in the media a lot. We want to focus in and play the best football we can and win as many football games as we can."

Here are some things to know about the season opener between the Bills and Jets:

Bell will make his Jets debut after a 20-month layoff that included sitting out all of last season with Pittsburgh and signing a four-year, $52.5 million deal with New York in March.

He didn't play in a preseason game, but is healthy and eager to get on the field Sunday. Bell told Gase to not hold back on incorporating him into the game plan.

"I've been waiting a long time for this moment," the three-time Pro Bowl selection said.

The Bills know it, and expect to see shades of the same dominant running back who was one of the NFL's most versatile players before sitting out.

"He's a phenomenal player," Bills defensive end Jerry Hughes said. "He knows how to get his body back in shape."

Their red-zone defense also had its issues, allowing 34 touchdowns on 48 opponent possessions inside the 20. And Buffalo stopped an opponent from scoring any points just twice — and interception and missed field goal.

A key to the Jets' season will be the continued progress by Darnold, who threw six touchdown passes and just one interception in his last four games as a rookie.

Gase raved throughout the offseason and training camp about Darnold's mature approach to soaking up the playbook and his natural playmaking ability on the field. The coach also was excited about having a quarterback at this stage of his development, something he has never previously experienced.

"There's no limitations on him," Gase said, "and it's fun as a playcaller."

LeSean McCoy's departure came after the least productive season of his 10-year career. He became expendable as a result of rookie Devin Singletary's arrival and the offseason signing of Frank Gore .

The Bills felt there wasn't enough playing time in a running back-by-committee approach for McCoy to fit.

"He still looks like he's 25 somehow, no idea how," Gase said of the 36-year-old Gore, who was with the coach in Miami last year. "That's a good addition for them."

Some other new faces expected to be key contributors this season: