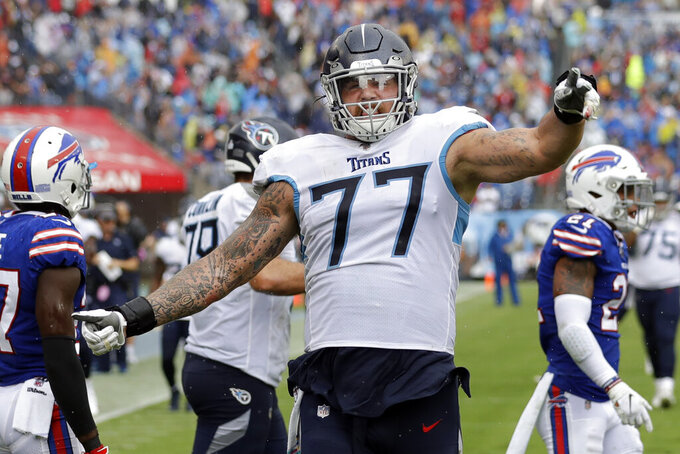 Tennessee Titans offensive tackle Taylor Lewan yells after a play in the second half of an NFL football game against the Buffalo Bills Sunday, Oct. 6, 2019, in Nashville, Tenn. (AP Photo/James Kenney)

The Titans' three-time Pro Bowl left tackle gave a shout-out Monday on Twitter to Bills defensive end Shaq Lawson for his production as a first-round pick with a screen shot of Lawson's stats through Sunday's 14-7 win by Buffalo. Lawson had no tackles or sacks in the game.

Phillips, who had a career-high three sacks by halftime, took over.

The defensive tackle wrote that Lewan should get drug tested again and called him a "soft cry baby." Phillips then shared a couple of videos of Lawson tying up Lewan so he could get his second sack followed by a tweet with a screen grab of a story for Lewan failing a drug test earlier this year with "People don't forget @taylorlewan77."

Then the Bills lineman, who played the Titans and Lewan twice last season first with the Dolphins and then Buffalo, tweeted out a screen grab of the Titans left tackle unconscious in the 2018 season opener at Miami with the hashtag "NSFW" to Lewan. The Titans tackle missed the next game with a concussion.

Phillips said after the Bills' win that he was really happy Lewan returned from his four-game suspension against Buffalo and that he could be a part of the Bills piling up five sacks.

"That's all I have to say about him," Phillips said.