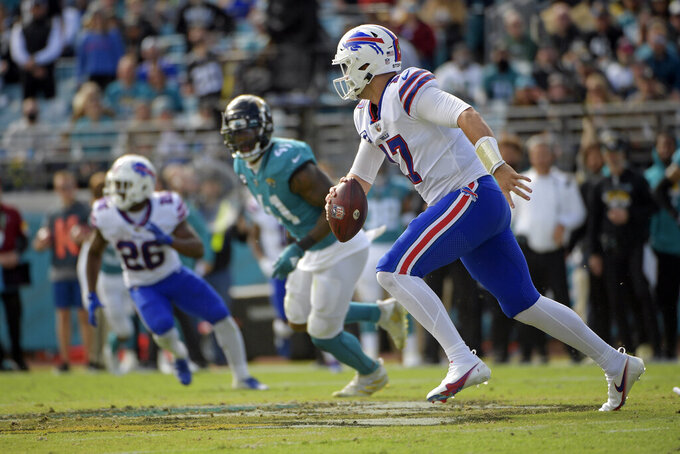 ORCHARD PARK, N.Y. (AP) — For a coach who generally avoids criticizing his team in public, Sean McDermott was honest in assessing the sorry state of the Buffalo Bills' running attack on Wednesday.

The struggles, McDermott said, aren’t limited to Buffalo’s dud in a 9-6 loss at Jacksonville last weekend, or to this season alone. The problem, he said, dates to the final half of last season when the offense became too quarterback-dependent, and has the potential of jeopardizing the team’s chances for success this year.

“It is something that we need to do, and we need to do better if we want to be the team that we’re trying to become,” McDermott said as the Bills (5-3) prepared to play at the New York Jets (2-6) on Sunday.

“I thought we’d be further along,” he added. “I can promise you adjustments are being made.”

Without revealing what those changes might be, McDermott acknowledged he’s considered having running back Matt Breida active for just the third time this season even if Zack Moss is cleared from the NFL’s concussion protocol.

The coach was more specific in calling out Buffalo's lack of push up front. He noted that while today's offenses feature a pass-first approach, the one thing that hasn’t changed is a need to be physical at the point of attack.

“You still have to have that piece of the foundation because you can’t do certain things whatever you’re trying to do, run, pass,” he said, tapping his finger on the table for emphasis. “You cannot lose sight of the core aspects of the game of football.”

Buffalo has lost two of three, and its AFC East lead has dwindled to a half-game over New England (5-4).

The ground attack was nonexistent against a Jacksonville defense that entered the game ranked 14th against the run and 26th in total yards allowed.

Moss, before he was hurt, and Devin Singletary combined for 22 yards on nine carries. Quarterback Josh Allen led the team in rushing with 50 yards on five carries.

Those numbers continued a four-game trend in which Allen has accounted for 190 of Buffalo’s 377 yards rushing, and scored both touchdowns.

The lack of a running threat is affecting the passing game. Defenses are protecting against deep throws while crowding the box to overwhelm Buffalo’s line and give Allen little time to set up in the pocket.

As a result, Allen is throwing more often, but for fewer yards. After going 31 of 47 for 264 yards with two interceptions against Jacksonville, he’s topped 300 yards twice this year with 40 or more attempts, as opposed to doing so eight times last season.

“Complementary football," McDermott said. "Stopping the run helps to stop the pass. It all just fits together and has to work together.”

McDermott’s comments were noteworthy for a coach who generally avoids criticism in favor of vague pronouncements about his team needing to improve. But he didn't go so far as to say Buffalo's running game is in crisis.

“Good teams make adjustments, and that’s what you have to do every season,” he said.

The coming weeks will determine whether the Bills are one of those teams.

Allen said he has to do a better job calling plays, and he defended his offensive line, which gave up a season-high four sacks against Jacksonville.

“They’re working their tails off,” Allen said. “They’re doing the best job they can, and we’re going to continue to improve.”

Health is an issue, with starting guard Jon Feliciano sidelined by a calf injury, though right tackle Spencer Brown could return after missing two games with a sore back.

“No season is clean. You want it to be, but the reality of it is, no season is clean in a straight line,” McDermott said. “There’s adversity every year, so every team gets tested. And it’s a test every season of how long a group of people, men and women, can stay together when whatever it is tries to pull you apart.”