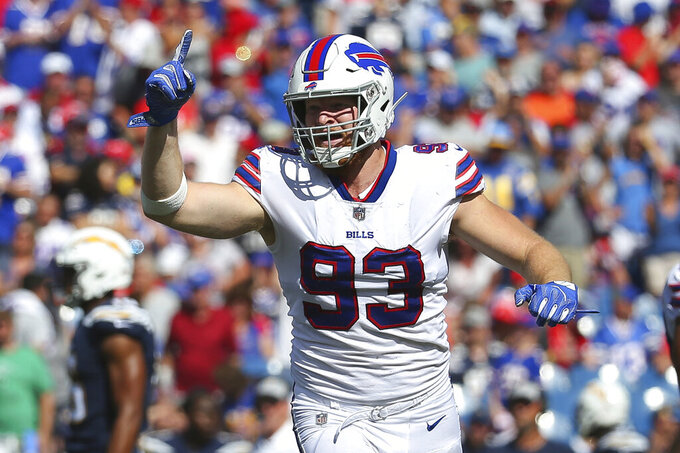 FILE - In this Sept. 16, 2018, file photo, Buffalo Bills defensive end Trent Murphy (93) celebrates a play against the Los Angeles Chargers during the second half of an NFL game in Orchard Park, N.Y. Murphy acknowledges he was fooling himself for scoffing at the projections of how long it would take to recuperate from a severe injury to his left knee. (AP Photo/Rich Barnes, File)

ORCHARD PARK, N.Y. (AP) — Trent Murphy acknowledges he was fooling himself for scoffing at how long doctors and friends projected it would take to recuperate from a severe left knee injury.

Though the Buffalo Bills defensive end learned he doesn't possess super-human healing powers, Murphy says the challenges and setbacks he experienced attempting to cut his rehabilitation from 18 months to 12 upon signing with the Bills a year ago were worth it.

"A lot of people gave me that feedback, players who have been through it called me and said, 'Man take it easy. Take it easy,'" Murphy said, recalling the advice he received shortly after tearing both knee ligaments in a preseason game with Washington in August 2017.

"Yeah, that wasn't an option for me. I'm not waiting to get better next year. It was today, today. Now," he added. "It was tough for sure, but I'm happy I fought through it."

On the brighter side, next year has finally arrived.

The muscle pulls, groin strains and various tweaks — byproducts of Murphy compensating for his surgically repaired knee — that limited his practice and playing time last season are in the past. Upon completing a voluntary practice session this week, Murphy happily declared himself as injury-free.

"To be able to contrast that process and be where I'm at now, I've got a different attitude, I'm a different dude, I feel way better," the 28-year-old said. "It's like night and day."

And that puts Murphy in position to finally begin proving the career-best numbers he posted in 2016, his third NFL season, weren't a fluke.

Rather than get an opportunity to build on those numbers, Murphy's career was sidetracked with a season-ending injury while also entering the final year of his contract.

The Bills thought enough of Murphy by signing him to a three-year, $21 million contract.

Playing through the pain, and despite missing a majority of the offseason, Murphy was still able to put up respectable numbers: four sacks, nine quarterback hits and five tackles for loss in 13 games, including 10 starts.

And yet, the ever-driven Murphy — he drove through a snowstorm to get to Buffalo to sign his contract — knows he could've done better.

"Every time I walked off the field, I know there was more I could've done," he said.

The Bills weren't disappointed in his production by having already factored in the time Murphy would require to bounce back from such a devastating injury.

"Oh, absolutely," defensive coordinator Leslie Frazier said. "Coming off that type of injury that he had, it takes time not only from a physical standpoint, but mental, where you gain the confidence to be able to do some of the things you did before."

And Frazier sees the payoff by noting a new jump in Murphy's step this spring.

"We're seeing the fruits of that because he works extremely hard," Frazier said. "He's a different-looking player today than he was a year ago at this time."

The plan is no different from last year, with Murphy pegged to start on the left side opposite Jerry Hughes. Buffalo is also hoping to improve its pass rush season with first-round draft pick defensive tackle Ed Oliver, taking over for the since-retired Kyle Williams.

Murphy said he began feeling like his old self once he began working out this offseason.

"I had a couple of wounds to lick, and after I had a little down time, I was like, 'All right. You know what, I got this,'" Murphy said. "The fact that there's that much left in the tank, I'm as motivated as ever."