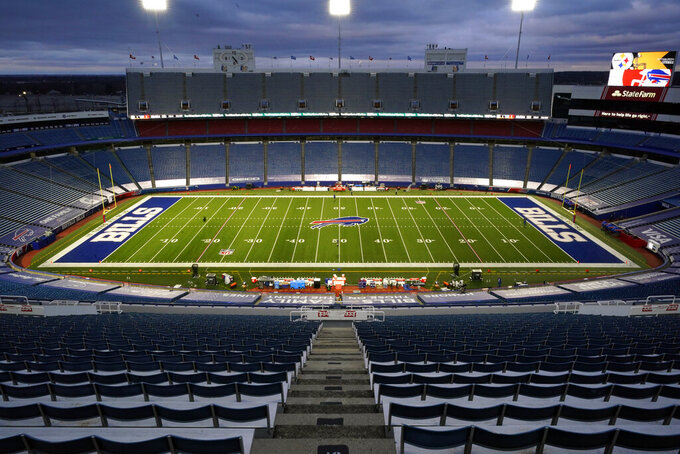 FILE - In this Dec. 13, 2020, file photo, the stadium is mostly empty before an NFL football game between the Buffalo Bills and the Pittsburgh Steelers in Orchard Park, N.Y. A person with direct knowledge of discussions tells The Associated Press the cost of the Bills proposed new stadium is $1.4 billion; the stadium is to be built across the street from the team's existing facility. The person spoke to The AP Thursday, Aug. 12, on the condition of anonymity because the details of proposal haven't been made public. (AP Photo/Gene J. Puskar, File)

BUFFALO, N.Y. (AP) — Buffalo Bills owners Terry and Kim Pegula are committed to paying a portion of the projected $1.4 billion in their proposal to build a stadium.

“When it comes to the future new home of the Bills, (the Pegulas) have always known that, like virtually all NFL stadiums, this will ultimately be some form of a public/private partnership,” Pegula Sports and Entertainment senior vice president Ron Raccuia said in a statement to The Associated Press on Saturday.

Raccuia’s comments are the team’s first public statement since discussions with state and county officials on the team's future home opened two months ago. The statement is timed at ending speculation the Bills want taxpayers to pay the entire cost.

How the costs will be split is unclear, and to be determined in negotiations, which are expected to resume once Lt. Gov. Kathy Hochul takes over as New York governor following Andrew Cuomo’s resignation last week.

The Bills want to replace the newly renamed Highmark Stadium, which opened in 1973. The proposal calls for the stadium to be built in a Bills-controlled parking lot across the street from their current home.

A person with direct knowledge of discussions revealed the project's cost and stadium location to the AP earlier this week, and spoke on the condition of anonymity because those details are private.

Renovating the current stadium is not considered an option because costs for structural and modern-day upgrades are considered too expensive.

The Bills want to continue their partnership with the state and county, whose lease on Highmark Stadium expires in July 2023. In negotiating the current 10-year lease, the state and county committed $227 million toward extensive renovations and annual capital and game-day expenses.

The Pegulas bought the team in 2014 for a then NFL-record $1.4 billion. They have spent an additional $146 million on unreimbursed capital and game-day and stadium-related expenses. That includes suite upgrades, construction of a training facility and expansion of practice fields.