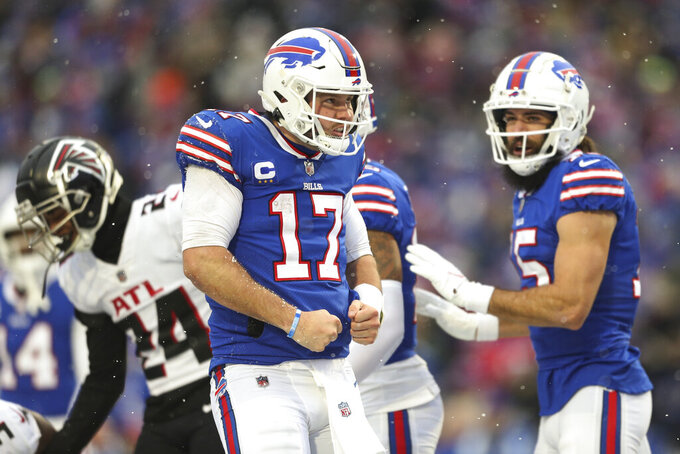 ORCHARD PARK, N.Y. (AP) — If not for the sheer fact of being bald, Bills coach Sean McDermott acknowledges what hair he could grow would have turned grayer during a season in which Buffalo teetered on the brink of collapse before clinching a third consecutive playoff berth.

“Would I have more gray hair? Probably,” McDermott said with a laugh.

“But I think that shows wisdom, though, too, right? I think you learn a lot going through a season like this,” he added. “Some seasons are harder than others, and that’s what makes it, I guess, enjoyable on the other hand, when you can work your way through it and have a successful season like we’ve been able to.”

At 10-6, the Bills need a win — or a New England loss at Miami — in their season finale against the New York Jets (4-12) on Sunday to clinch Buffalo’s second consecutive AFC East title.

What separates this season from last year, when Buffalo won 13 games to run away with the division title, is how much bumpier the road has been.

Following a 4-1 start, the Bills endured a stretch in which they dropped five of eight, including a 9-6 dud at Jacksonville, to cede first place to New England following a 14-10 loss on Dec. 6.

Rather than wilt, Buffalo rallied to win three straight, including a 33-21 win at New England, in a run which began after the Bills trailed 24-3 at halftime in an eventual 33-27 overtime loss at Tampa Bay.

“It speaks a lot about the guys in this locker room, about the front office and the coaching staff,” quarterback Josh Allen said. “There was no panic in our locker room and we have a sense of calmness, but also a lot of urgency.”

Allen’s comments and the Bills' resilience validate the vision McDermott and GM Brandon Beane outlined upon their arrival in 2017 by vowing to transform a perennial loser, in the midst of a 17-year playoff drought, into a team with a track record of sustained success. Buffalo has now clinched its fourth playoff berth in five years.

The Jets continue their search for stability in missing the playoffs for an 11th consecutive season, while showing glimpses of promise under Robert Saleh, their third coach since Rex Ryan was fired following the 2014 season.

What’s encouraging is the competitiveness they’ve shown over the past few weeks by beating Jacksonville before squandering a 24-10 lead in a 28-24 loss to the Buccaneers last weekend.

“The biggest thing is laying the foundation of what we’re trying to build on,” Saleh said.

It’s why he points to the game at Buffalo as one last chance for the team to show growth and experience a playoff-type atmosphere in what should be a loud, unfriendly environment.

“We’re going to get their absolute best shot and we’ve got to give it right back to them. We’ve got to make them earn it,” Saleh said. “It’s a tremendous opportunity and it’s one that I hope our guys are excited about just like I am.”

Jets quarterback Zach Wilson will face the Bills and their top-ranked defense for the first time after missing the teams’ first meeting on Nov. 14 while recovering from a sprained knee ligament. Mike White started in Wilson’s place and was intercepted four times in a 45-17 loss.

The No. 2 overall pick has gone four straight games without being picked off, the longest streak by a Jets rookie.

The Bills are 14-2 against opposing quarterbacks with 16 or fewer career starts since the start of the 2019 season, with both losses coming this year to Jacksonville’s Trey Lawrence and New England’s Mac Jones. Lawrence went 15 of 26 for 118 yards in a 9-6 win, while Jones attempted just three passes in a 14-10 win in blustery conditions.

Over those 16 games, the Bills have allowed just 10 touchdowns passing, while generating 35 sacks and 24 interceptions.

While the Bills have leaned on their running game over the past three weeks, coordinator Brian Daboll insists they’re still a pass-first team. Running back Devin Singletary particularly bailed out the Bills with a career-best 110 yards rushing and two TDs in carrying the load after Allen threw interceptions on three straight possessions in a 29-15 win over Atlanta last week.

“I think he’s a really consistent player for us,” Daboll said, before adding: “Look, we’ve thrown the ball a lot here. I’ll say we’ll continue to throw it a lot, too.”

Braxton Berrios had 20 catches for 180 yards and one touchdown in the Jets’ last four games, but will miss the season finale with a quadriceps injury.

The do-it-all player was placed on injured reserve Friday after not practicing all week.

His presence will be missed. Berrios rushed five times for 25 yards and two TDs in the last four games, while also starring on special teams. Berrios leads the NFL with a 30.4-yard kick return average and ranks second with a 13.4-yard punt return average.

“There’s the old story about two wolves living inside you: one is good, one is bad. The one you feed is the one who wins,” Berrios said of the doubts he felt early in his career after being cut by New England in 2019. "That kind of encapsulates what that was like. It wasn’t an ideal start. Luckily, I found a home in New York.”