Billy Turner's positivity has been contagious for Packers 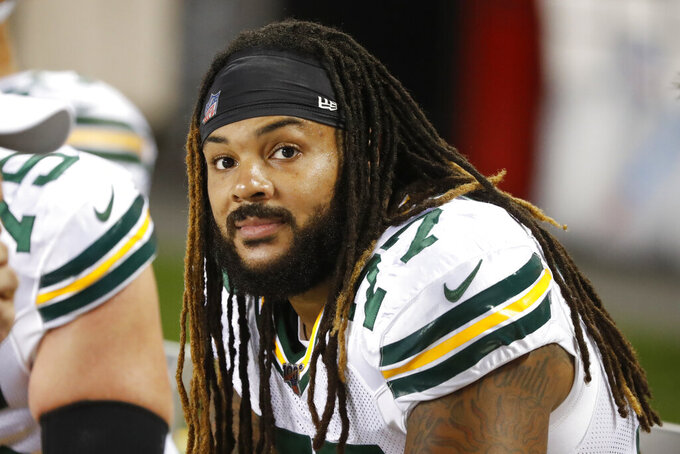 FILE - In this Thursday, Sept. 5, 2019 file photo, Green Bay Packers offensive tackle Billy Turner sits on the bench during an NFL football game against the Chicago Bears in Chicago. Green Bay Packers right guard William "Billy" Turner's perspective on life was bleak and negative after he was cut by the Dolphins in October 2016. But more than three years later, Turner's outlook has changed, and the 6-foot-5, 310-pound guard's conscious mission to spread positive energy has become a driving force behind the Packers' success this season.(AP Photo/Charles Rex Arbogast, File) 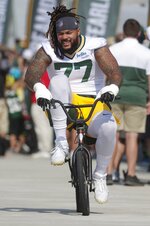 GREEN BAY, Wis. (AP) — Green Bay Packers right guard William "Billy" Turner's perspective on life was bleak and negative after he was cut by the Dolphins in October 2016.

But more than three years later, Turner's outlook has changed, and the 6-foot-5, 310-pound guard's conscious mission to spread positive energy has become a driving force behind the Packers' success this season.

"It's contagious. ... It's a real thing," teammate Davante Adams said of Turner's constant positive vibe. "I feel that from him. People get negative sometimes. You complain a little bit just being in this position, but he's one of the guys that reminds people to stay positive at all times and it's not just situational, it's pretty consistent, too."

After finishing the regular season with a 13-3 record, good enough to secure the No. 2 seed in the NFC playoff bracket, Adams, Turner and the Packers had their first practice of the new year on Thursday, 10 days before they host an NFC divisional game at Lambeau Field.

Turner has started all 16 games for Green Bay this season and earned an additional $500,000 for playing in at least 90 percent of the offensive snaps. But being a key player on a Super Bowl contending team was the furthest thing from Turner's mind just a short time ago.

After being cut from the Dolphins, the team that drafted him out of North Dakota State in the third round in 2014, Turner, a Minnesota native, found himself in Denver.

“That's kind of when I felt revived and recharged,” Turner said. “The people that God was bringing into my life, the people that I was meeting, it was like a chain reaction almost. This person brought this, and I learned this, and it just kept going down the line. I kept learning so much good things and so much positivity.”

That positivity was greater than ever for Turner on March 14. That day, Green Bay acquired safety Adrian Amos, linebackers Preston Smith and Za'Darius Smith and Turner through free agency.

Turner vowed to have a positive impact on the Packers organization from Day 1.

“This year has been the most thus far that I've been trying to portray and push a lot of that positive energy, that `Irie' energy and the `Irie' way just among everyone in the locker room,” he said.

Turner uses the hashtag “#Irie” on many of his social media posts. The word is synonymous with “good" in Jamaican Patois and has become the focus of Turner's positive movement of service.

Turner has the Irie Project, a collaboration that includes second-grade students who help create original artistic fashion pieces based on a theme of positivity. The project blends Turner's love of fashion and passion for spreading positive vibes. Each piece was to be given to Packers players and members of the organization Friday after practice.

“My big thing is positivity," Turner said. "We live in a negative world with a lot of negative stuff that's always going on and sometimes it's hard for people — depending on the situation that they're in — to see through things. To see the light, especially when a lot of people go through adversity, all different levels of severity, of course.

"But a lot of people go through ups and downs and bad times, but just to bring positivity, starting with the youth, the next generation, the people who are going to be brought up and be the next leaders of this country, the leaders of this world. Being able to promote as much positivity through them, giving back and just to promote a good, positive mindset with them that will hopefully in some kind of way change the world.”

Turner also has founded a non-profit organization called the Kind Energy Foundation, which awards micro grants to high school students so they may pursue and achieve heights in academics, athletics, fashion and self-love.

Many of Turner's teammates have already sported some of his designs, including Aaron Rodgers, who wore a custom “Irie” jacket designed by Turner on Sunday in Detroit.

Turner said his ultimate goal is to have a lot of “one-off, custom pieces” that he's designed to be available on his website by the end of the offseason.

“I don't want to have a clothing line right now just because with my profession, what I do, always being on the hunt to have something out there — the fall line, the spring line, the winter line — that's too much.”

Turner said a lot of the pieces will go along with his mission of spreading good vibes and giving back to the community.

“The positivity through the clothing and all of that, that's something that probably over the last two to three years has been more so evolving for me. I don't know how to explain it. I've always been a person to wear what he wants to wear and to express his self through clothing. I like it because it's a form of art. Style, in my mind, and the fashion world is a form of art. So being able to just take something in your head, in your imagination, and to create that is something special. It's fun. It calms me down. It's just something that I like to do.”