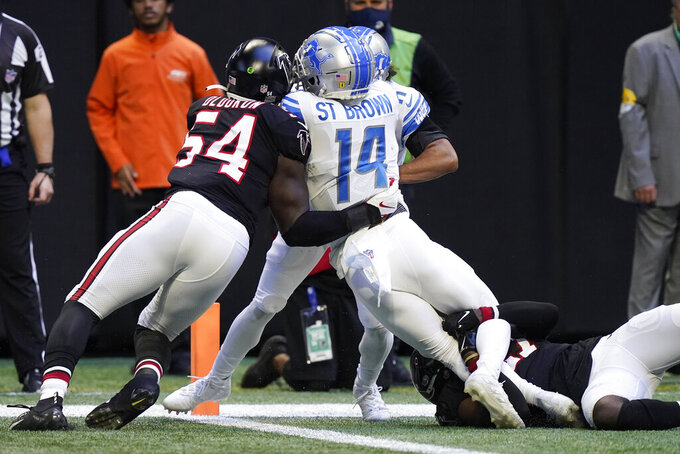 ATLANTA (AP) — It was the kind of ending that Tim Boyle dreamed up many times in his quest to be a starting quarterback in the NFL.

Boyle’s Detroit Lions recovered a fumble at the Atlanta 37-yard line with 2:18 remaining and down four points. Just one touchdown, and that would close it out for the Lions to get consecutive wins for the first time this season.

Instead, Boyle got tricked by the coverage six snaps later at the Falcons 9 and locked his eyes on receiver Kalif Raymond, which was a bad move. Linebacker Foye Oluokun, one of three Falcons defenders close to the ball, simply stepped up, read Boyle accurately and intercepted the pass at the 1.

The 20-16 loss on Sunday dropped Detroit to 2-12-1 and left Boyle, who started in place of Jared Goff for the second time this season, wondering what might have been.

“Probably the most confident I’ve played — I know I’ve only played two games — but as a football player in my life,” Boyle said. “I just went into this game feeling really comfortable. For it to end like that is heartbreaking. It really is.”

Boyle was much better than his first start in Goff’s absence, a 13-10 loss five weeks ago in which he completed 15 passes for just 77 yards and two picks. This time, he was 24 of 34 passing for 187 yards and a touchdown and he played with poise until his final snap.

“That’s my first opportunity being in a two-minute drive to win the game, and it’s intense,” said Boyle, who spent his first two seasons as a reserve in Green Bay. “People are tired, and communication kind of — it’s being able to settle down in those moments. I don’t feel like it was too big for me, but it’s just football. It comes down to the last (part of) the game, and I made a critical error that I can’t make, but ultimately that falls on me. But overall I’m proud of the guys. We fought so hard.”

The Lions certainly had their chances. They led 10-7 in the second quarter on Boyle’s 20-yard scoring strike to Amon-Ra St. Brown and figured they had exhausted the Falcons defense with a 17-play drive that took 10:26 off the clock and brought Detroit within four with a field goal early in the fourth quarter.

Sure enough, the defense held up its end on the next possession, when Atlanta’s Russell Gage caught a pass on the left side, took a few steps forward and lost the ball when linebacker Jalen-Reeves Maybin forced it out. Safety Dean Marlowe recovered at the Atlanta 37, and the Lions had life.

But just as quickly as the opportunity presented itself, Boyle’s pick ended the comeback bid.

“I thought Tim played well through the course of the day,” Detroit coach Dan Campbell said. “You take away the last play and there was a third down fade throw to Josh Reynolds that I would’ve liked to see him hit. But otherwise I thought he played quick and efficient and clean and certainly gave us a chance. He wasn’t a hindrance to us at all.

“I think what he needed to show was that he improved from the last time he played a game. That’s what he showed.”

Boyle’s time in the starting lineup likely won’t be long if Goff receives two negative COVID-19 tests and is allowed to return to practice this week. Next up for the Lions is a game next Sunday at Seattle.

But this game was all about Boyle and his inability to close out at the end. Coaches and teammates tried to console him as he walked off the field after the interception.

“There’s not a whole lot you can hear or say in those moments that will make anything — the pain — go away,” Boyle said. “The fact that I have teammates and coaches come up to console me means the world to me. That’s family. That’s football. It’s powerful. It’s emotional. But everyone was telling me to keep my head up.

“It’s tough because you don’t get too many opportunities in the NFL to showcase what you have in critical moments, in third down, two minute, red zone. You have to be perfect and understand what’s going on and ultimately I made that last throw and made a mistake and lost the game.”