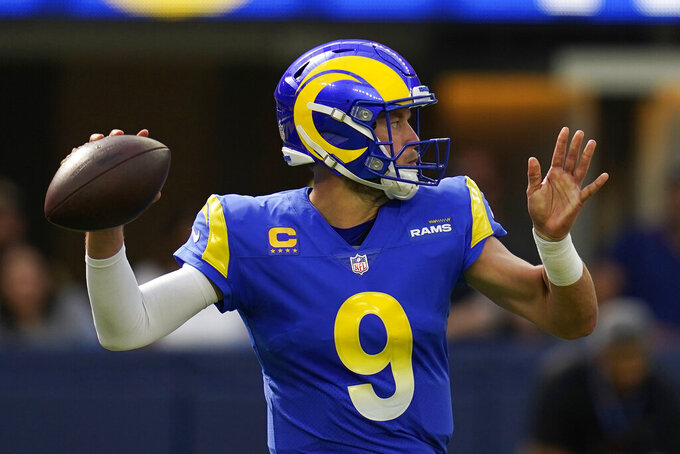 Los Angeles Rams quarterback Matthew Stafford passes during the first half of an NFL football game against the against the San Francisco 49ers Sunday, Oct. 30, 2022, in Inglewood, Calif. (AP Photo/Gregory Bull)

The last two Super Bowl winners meet Sunday for the fourth time in three seasons, but the 45-year-old Brady will be looking for a lot more than payback.

The Buccaneers (3-5) have lost five of six following a 2-0 start. Brady has dropped three straight starts for the first time in two decades, and the seven-time NFL champion has been unable to beat the Rams since moving from New England to Tampa Bay in 2020.

The Rams (3-4) are also below .500, searching for answers to turning around a slower than expected start after ending Tampa Bay’s bid to repeat as Super Bowl champs last January and going on to win the Lombardi Trophy themselves.

“It’s tough getting up here every week figuring out how to not be overly disappointed in what we’re doing. But we’re fighting hard and we’re going to try to make it better,” Brady said.

“There’s a lot of football to play, and we’ve got to play better,” Brady added. “That’s just the reality of the situation we’re in.”

Brady just as well could have been speaking of the challenge the Rams also face moving forward.

Injuries have been a factor. But much like the Bucs, a sputtering offense and inconsistent defense have contributed to the woes.

Quarterback Matthew Stafford is confident the Rams will get better as the season progresses.

“It’s not one of those things where you win one, you win them all," Stafford said. "You’ve got to win them one at a time. We understand that it’s a long season, bunch of football still left.

“Urgency is high to go out there and fix whatever we need to fix, go out there and execute at a higher level, but not (be) too worried about the long term at the moment. Just trying to figure out what we can do to win this week.”

Despite losing the past three to Pittsburgh, Carolina and Baltimore to drop Brady two games below .500 for the first time in a 23-year career, the Bucs are just one game out of first place in the NFC South.

Brady isn’t taking anything for granted.

“The reality is there’s a reason we’re 3-5. You’ve got to fix why you’re 3-5,” he said. “It’s one game, but there’s not like we have a huge margin of error when you take the field. We don’t. We’ve got to make the plays that are winning plays.”

“For me, it’s a credit to all the guys that I’ve played with, who have blocked for me, have caught passes. I think all those things are a great celebration of all those guys. I can’t do (anything) in this league without guys doing what they’re amazing at, too,” Brady said.

“They’re great achievements,” he added on the milestone “But as much as people want to say, ‘Oh, this is what Tom Brady did,’ in my mind, this is what myself and all these other people that have contributed to my life have done as well.”

KUPP ON THE CUSP

If he hits the mark against Tampa Bay, he’ll be the second-fastest receiver in NFL history to 500 catches in just 79 games. Last season’s NFL leader in receptions, yards receiving and TD catches will be only the fourth wideout to make 500 catches in a career with the Rams, joining Isaac Bruce, Torry Holt and Henry Ellard.

While the Rams’ carousel at running back gets plenty of attention, their struggles in the running game fall heavily on an offensive line that’s a shadow of the unit that still two sacks and seven QB hits by the Buccaneers in last year’s playoff game.

LA’s line has lost four starters to injury this season, and only center Brian Allen has returned so far.

No matter who ends up carrying the ball for the Rams, Tampa Bay’s defensive front will have a strong chance to improve its unimpressive performance against the run this season.