Brady has frustrating night as Patriots fall to Texans 28-22 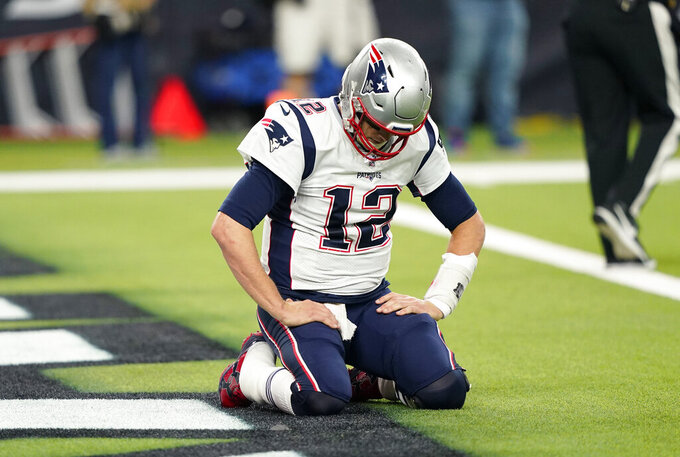 New England Patriots quarterback Tom Brady (12) kneels on the turn after a play during the second half of an NFL football game against the Houston Texans Sunday, Dec. 1, 2019, in Houston. (AP Photo/David J. Phillip)

HOUSTON (AP) — Tom Brady was hit, hurried and harassed by the Houston Texans on Sunday night in a loss that kept the New England Patriots from becoming the first AFC team to clinch a playoff spot.

Deshaun Watson threw three touchdown passes and had the first TD reception of his career, and the Texans frustrated Brady in a 28-22 victory more lopsided than the score.

"Execution," Brady said. "Just got to do a better job, and it’s tough to get behind and come back. Just put ourselves in a pretty deep hole and you can't do that on the road."

Brady completed two of his three TD passes in the final 4 minutes to pull within six. A Patriots (10-2) player got a hand on Jake Bailey’s onside kick attempt with 50 seconds remaining, but the ball bounced out of bounds.

"There's really not a whole lot to say here," Belichick said. "The Texans did a good job tonight, across the board, in every area. They were just better than we were."

James White had a 12-yard reception for New England's first touchdown late in the third quarter, but Watson grabbed the first reception of his career on a flip from DeAndre Hopkins on a trick play with about 10 minutes left to make it 28-9.

The Patriots entered needing a win to clinch a playoff spot after Oakland's loss to Kansas City earlier in the day. Instead, they struggled to sustain drives, and Brady often looked upset on a night he was 24 of 47. He threw an interception and was sacked three times, hit on 12 other occasions and was seen yelling at his receivers on the sideline after a drive with several incompletions in the first half. He finished with 326 yards.

"We're all trying to do a good job out there," he said. "I give them credit, they played well. We didn't make enough plays. Just wasn't a great game."

Brady's performance gave him 3,000 yards passing (3,268) for the 17th time in his career, which is the second-most in NFL history behind 18 by Brett Favre.

New England dealt with a flu bug this week that swept through the locker room and left two players inactive Sunday. But Brady wouldn't use that as an excuse for their subpar work on Sunday night.

"Guys battled hard and I think you deal with a lot of adversity over the course of the season," he said. "I don't think that had any effect on the game. I think us trying to figure out how to do a better job for 60 minutes is what's most important ... we played against a good team on the road, and when you don't play good, you don't win. So we didn't deserve it."

Brady connected with White again with about four minutes left, but the 2-point conversion failed to leave New England down 28-15. The Patriots attempted an onside kick after that and Houston recovered but couldn’t move the ball and had to punt.

Brady threw a 20-yard pass to Julian Edelman that cut the lead to six with 50 seconds left. But the Patriots couldn’t recover a second onside kick and Houston ran out the clock.

White was asked about the struggles of the young players on the team but was quick to point out that no one played particularly well on Sunday night.

"It's not just the younger guys, there are veteran guys, like myself, who made mistakes tonight," he said. "We all made mistakes out there, and everybody needs to be accountable on each and every play."

Despite the tough loss, the Patriots remain in first place in the AFC East and are tied with the Ravens for the AFC's best record. Brady was asked if his offense is talented enough to take the Patriots where they want to go this season.

"We're battling, we're trying as hard as we can," he said. "Hopefully we can make enough plays and be the best we can be. All remains to be seen. You can make a bunch of predictions and so forth, but that's not what it's about. It's about going out there and doing it."