Brees first game at 40 his biggest in 9 years 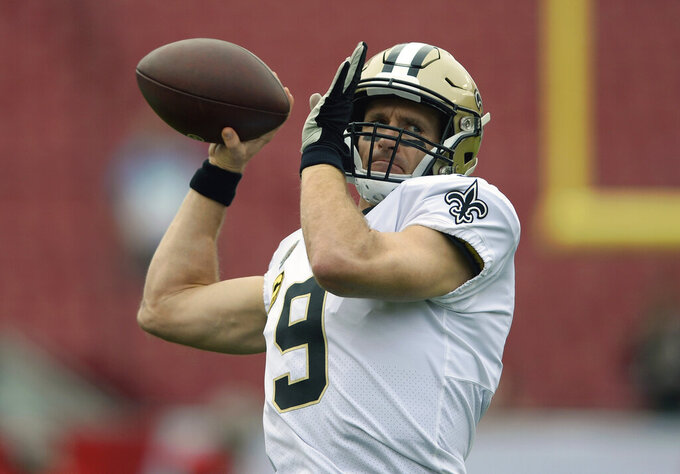 FILE - In this Dec. 9, 2018, file photo, New Orleans Saints quarterback Drew Brees (9) throws a pass before an NFL football game against the Tampa Bay Buccaneers, in Tampa, Fla. Drew Brees is about to play his first game at 40. It's also the biggest game he's played in nine seasons and a Super Bowl is on the line. (AP Photo/Jason Behnken, File) 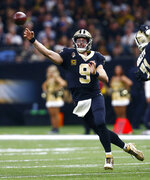 METAIRIE, La. (AP) — Drew Brees is about to play his first game as a 40-year-old — and his biggest game in nine years.

When the Saints host the Los Angeles Rams in the NFC championship game in New Orleans on Sunday, it'll be the first time Brees, who turned 40 on Tuesday, has played for the conference title since the 2009 season. Brees turned 31 shortly before the Saints defeated Minnesota en route to the franchise's lone Super Bowl.

One of the enduring images from that championship season was Brees standing next to his wife, Brittany, holding aloft their son, Baylen, who grasped at confetti floating around them.

Baylen was Brees' first child, born on his father's 30th birthday, and had recently turned 1 when the Saints beat the Colts in Miami in February 2010.

Now Brees is a father of four —three boys and one girl, ages 4 to 10. They were all present on the sideline when Brees set the all-time NFL record for yards passing in Week 5 of this season, and Brees said after practice Wednesday that he has cherished the opportunity to share one of his best seasons with them.

"They're so football-crazed right now," Brees said. "That's what makes this so much fun."

Brees recounted that during some recent one-on-one time with his second child, Bowen, the quarterback asked his 8-year-old son what his favorite thing to do is.

"They love football. They love the Saints. They love our team. They love this season," Brees said. "We're just trying to stay in the moment and enjoy it as much as we can."

There has been plenty to enjoy. While leading the Saints to a 13-3 record and No. 1 playoff seeding in the NFC, Brees broke NFL records for completions and yards passing. Through 18 regular seasons, he has completed 6,586 passes for 74,437 yards. His completion record surpassed Brett Favre's 6,300. His yards passing eclipsed Peyton Manning's 71,940. Brees' 520 touchdowns passing leave him 19 behind Manning — but also only three ahead of 41-year-old New England QB Tom Brady — for that record.

This season was not Brees' most prolific, but was his most efficient.

While Brees' 3,992 yards passing were his fewest since he joined the Saints in 2006, but his 74.4 percent completion rate broke his own previous NFL record of 72 percent — set just last season. His TD-to-interception ratio of 32 to five was the best of his career.

And after a slow start in a divisional playoff victory over Philadelphia on Sunday, Brees finished 28 of 38 passing (73.7 percent) for 301 yards, with two TDs and one interception.

Brees underthrew two deep balls in that game, one of which resulted in his interception. And while observers might be inclined to connect those misses to age-related, diminishing arm strength, 29-year-old Eagles QB Nick Foles also had an underthrown downfield pass intercepted in that game.

Brees still connected on a number of tough throws, including first-down conversions to Michael Thomas on second-and-20 and third-and-16 during a pivotal, second-half touchdown drive.

The Saints did not have practice on Brees' birthday, but he went to work anyway.

"A very normal day," Brees said. "Come in early and get grinding on the film, get home in time for dinner and hang out with the kids and have a little cake, read bedtime stories and tell them to quit talking and laughing and go to bed."

His wife, Brittany, had thrown a surprise party for her husband on Sunday night — after the divisional-round victory — at a brewpub owned by former Saints right tackle and current radio play-by-play announcer Zach Strief.

Brees seemed to embrace the milestone birthday, enthusiastically donning a black baseball cap with a large No. 40 in gold numerals.

As with the 41-year-old Brady, Brees' teammates sometimes seem in awe of the discipline he demonstrates in not just maintaining health and fitness, as well as the work he puts in to studying game plans and opposing defenses, constantly refining his throwing mechanics and taking extra time after practice to develop chemistry and timing with receivers.

And they weren't surprised that Brees was widely viewed as one of the leading candidates for league MVP this season, along with Kansas City quarterback Patrick Mahomes, who is nearly 17 years Brees' junior.

"There's nothing surprising me just because I've known him, how he prepares, how he takes care of his body," said Saints running back Mark Ingram, as he tried to put Brees at 40 into perspective. "It just says a lot about him and his character and the person he is."

Ingram went on to say that if anything, Brees' age is still an asset, because even seasoned pros can benefit from a more experienced team leader who still performs at a high level.

Notes: Newly signed defensive tackle Tyrunn Walker practiced with the club for the first time after filling the roster spot that opened when starting tackle Sheldon Rankins went on injured reserve with a torn Achilles. ... Rookie receiver Keith Kirkwood missed practice with a calf injury and tight end Ben Watson did not practice because of an illness.