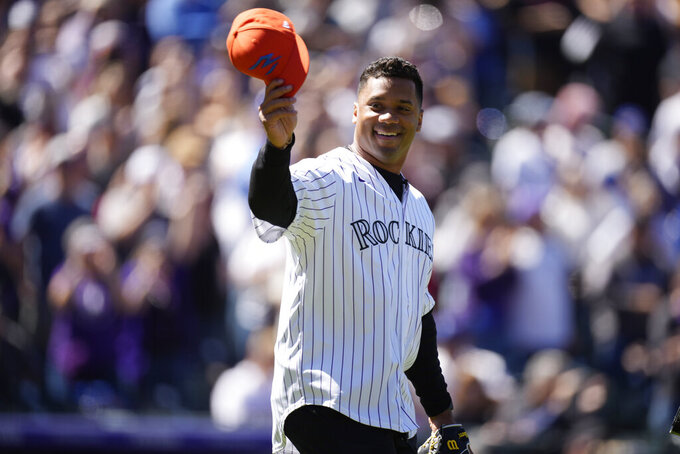 Denver Broncos quarterback Russell Wilson doffs his hat as he heads to the mound to throw out the first pitch during ceremonies to mark the regular-season home opener in a baseball game against the Los Angeles Dodgers Friday, April 8, 2022, in Denver. (AP Photo/David Zalubowski)

OUTLOOK: Paton says he doesn't lament the lack of a first-round pick because every time he sees Wilson throwing the ball he's thankful his search for a premier passer is over. Paton figures it'll cost too much to move back into the first round, but he doesn't rule out moving up in the second — or even moving down. Paton’s makeover is far from over, but he’ll have to hit on this year’s draft class and find impact players like he did last year in Pat Surtain II, Javonte Williams, Quinn Meinerz, Baron Browning and Jonathan Cooper in his first draft in Denver. Denver's not on the clock until the final selection of Round 2. But it has two selections in both the third and fourth rounds, giving Paton ammo to move up, and he still has nine picks overall even after the blockbuster trade for Wilson finally landed the Broncos with a worthy successor to Manning.