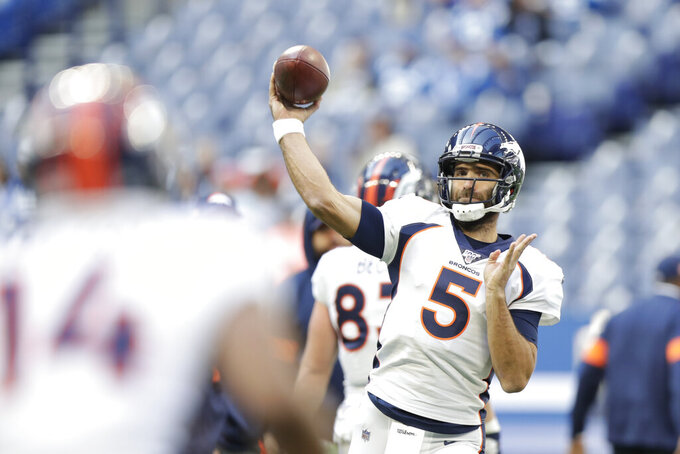 ENGLEWOOD, Colo. (AP) — Broncos quarterback Joe Flacco has a herniated disk in his neck that puts his season and possibly his career in jeopardy and leaves Denver's dysfunctional offense in the hands of a trio of quarterbacks who have never taken a regular-season snap in the NFL.

Coach Vic Fangio only ruled out Flacco for next weekend, when the Broncos (2-6) host the Cleveland Browns (2-5), saying, "He'll definitely miss this week. Then we'll evaluate after the bye and see where it's at."

Fangio said Flacco was taken for an MRI on Monday and he wasn't sure if surgery was necessary.

"They don't know that yet. I think right at this minute, they don't think so," Fangio said. "But those things are fluid."

Fangio said injured reserve could be a possibility for Flacco, who couldn't turn his neck after Denver's 15-13 loss at Indianapolis on Sunday, after which the veteran QB ripped his coaches for conservative play-calling .

Former Arkansas QB Brandon Allen, whom the Broncos claimed off waivers from the Rams last month, will get his first start Sunday since leading the Razorbacks past Kansas State 45-23 in the Liberty Bowl on Jan. 2, 2016.

Fangio said he'll decide this week between two rookies as Allen's backup: second-round draft pick Drew Lock, who is on IR with a right thumb injury, or undrafted QB Brett Rypien, who is on the practice squad.

Flacco said he first hurt his neck a couple of weeks ago and the team's medical staff worked on his neck in between series throughout the second half Sunday, when he was sacked three times after suffering a career-high eight sacks the week before.

Allen becomes the sixth starting QB since Peyton Manning's retirement following Super Bowl 50. The Broncos are 22-34 since then, having churned through Trevor Siemian, Paxton Lynch, Brock Osweiler, Case Keenum and Flacco, whom general manager John Elway insisted was still in his prime when he acquired him in a trade with Baltimore after the Ravens had moved on to Lamar Jackson.

The Broncos restructured Flacco's contract just before the season started, converting $17 million of his $18.5 million salary in 2019 into a signing bonus to gain some financial flexibility with the salary cap this season.

Just last week, the Broncos were talking about slow-rolling Lock's return to practice, which would trigger a two-week window in which they'd have to activate him or have him sit out the remainder of the season. Lock, a right-hander, sprained the thumb on his throwing hand in a preseason game against San Francisco on Aug. 19 and hasn't practiced since.

"We want to make sure he's ready before we put him out there," Fangio said.

The news on Flacco came a day after the veteran QB called out rookie offensive coordinator Rich Scangarello, although not by name, for his conservative calls down the stretch that led to another last-minute loss.

The Broncos were clinging to a 13-12 lead thanks to Adam Vinatieri's misses on a field goal and an extra point. Three times in the fourth quarter the Broncos punted from midfield, the last time with 1:55 remaining after Phillip Lindsay was stuffed for no gain on third-and-5 from the Colts 43.

"Well, c'mon, I just look at it like we're now a 2-6 football team, and we're like afraid to go for it in a two-minute drill, you know?" fumed Flacco, adding "it just feels like we're kind of afraid to lose a game," and "Why can't we be aggressive some of these situations?"

Flacco was particularly peeved that the Broncos didn't dial up more throws to receiver Courtland Sutton, who three catches for 72 yards and drew five flags on cornerback Rock Ya-Sin, three for holding and two for pass interference, while facing man coverage all day.

Fangio dismissed Flacco's criticism as general frustration over another close call, said he wished his quarterback would have kept his criticisms in-house and declared he was satisfied with Scangarello's play-calling.

"Yeah, we're doing fine there. Obviously, there's sometimes where we can call it better with the results that happened," Fangio said. "But I think we can just be a little bit more assertive when their team was playing us the way they were playing us."

DE Derek Wolfe, who had two sacks and forced a fumble that rookie Malik Reed recovered.

Since a decent debut at Oakland, Denver has just five TDs and three FGs in 43 second-half drives.

MLB Alexander Johnson, whose 28 tackles leads team since moving into the starting lineup a month ago.

The Broncos have to get Allen up to speed quickly, and the next one up is a rookie.