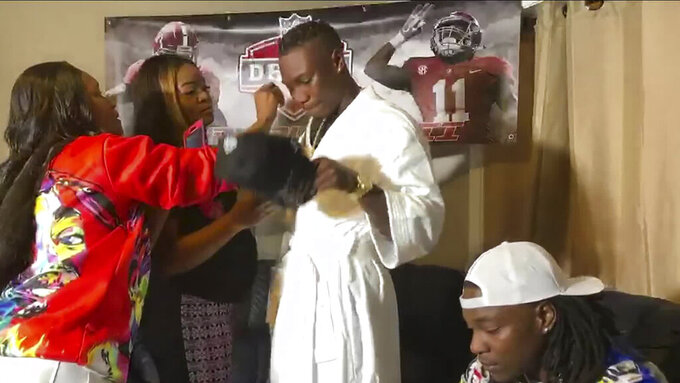 In this still image from video provided by the NFL, Henry Ruggs III, center, gets ready to put on a Las Vegas Raiders cap after being selected by the team in the first round of the NFL football draft Thursday, April 23, 2020. (NFL via AP)

With their blazing speed on offense, the Kansas City Chiefs ran away from their AFC West brethren en route to their first Super Bowl title in half a century.

So explosiveness was a common theme on the draft boards of rival general managers John Elway in Denver, Tom Telesco in Los Angeles and Mike Mayock in Las Vegas.

“Every move and signing we make we have to have them in mind,” Chargers coach Anthony Lynn said of the Chiefs, who have ruled the division since 2016 and used a 21-0 burst over the final six minutes to beat San Francisco in the Super Bowl.

“Let’s be honest, the entire league is chasing the Kansas City Chiefs,” said Mayock. “But we’re in the same division. They keep getting faster and more athletic, more dynamic every time you turn around. Other teams have to do the same.”

The Broncos used their first two draft picks on speedy wide receivers Jerry Jeudy of Alabama and KJ Hamler of Penn State to keep up with the likes of Tyreek Hill and Sammy Watkins. Their fourth-round selection was Missouri’s Albert Okwuegbunam, who had the combine’s fastest 40 among tight ends at 4.49 seconds.

“We just feel like we had to add that explosiveness,” Elway said.

The Chargers did, too, so after selecting Oregon QB Justin Herbert with the sixth pick, they added fleet-footed Oklahoma linebacker Kenneth Murray at No. 23. They envision Murray stuffing running back Damien Williams and chasing down QB Patrick Mahomes. They also added Virginia’s Joe Reed, another wide receiver with a sub-4.4-second 40.

“Kansas City’s offense can fly but it’s more than covering those guys. It is getting to the quarterback, too,” Telesco said. “Murray is going to help playing K.C. and everyone because of his explosiveness and speed. The way offenses are with things so spread out you have to run and chase.”

The Chargers, Raiders and Broncos have been chasing the Chiefs for four years now, but Kansas City (12-4) really pulled away in 2019 when nobody else in the division had a winning record.

So, did their rivals do enough in free agency and the draft to close the gap? Remember, the Chiefs didn’t sit still. They spent the draft getting their defense up to speed to complement all the burners they have on offense.

Second-round pick Willie Gay Jr. ran the second-fastest 40-yard dash among linebackers at the combine, and fourth-round pick L’Jarius Sneed not only had the fastest time among safeties at 4.37 seconds, but was the fourth fastest of any player that ran during the week in Indianapolis.

One of the undrafted free agents the Chiefs signed is Auburn’s Javaris Davis, who had the combine’s second-fastest 40 time among cornerbacks.

“They’re the world champs,” Mayock said. “I’ve known Andy Reid for a lot of years. Watching the way he and Brett Veach approach the draft, all they do is get faster. They drafted that great running back (Clyde Edwards-Helaire) from LSU, then they drafted Willie Gay, the linebacker I love.

“They keep getting faster and keep raising the bar.”

The division didn’t just see an infusion of speed but of skill.

“We needed to score more points, whether we’re playing the Chiefs or not,” said Denver coach Vic Fangio, whose team averaged a paltry 17.6 points a game last season. “It’s always good to be fast, but sometimes, people make the mistake of just getting fast with players that aren’t good football players. We believe our speed that we’ve drafted has come with players that also can play the game.

“Hopefully we’re a harder offense to defend now once it evolves and we get to playing games, but we need to score more points.”

Defensive back Chris Harris Jr. left the Broncos for the Chargers in free agency, and running back Melvin Gordon bolted the Bolts for Denver.

With teams limited to Zoom position meetings and weightlifting on their own during the coronavirus pandemic, it will be a while before Mayock, Elway and Telesco see if their emphasis on speed this offseason pays off.