Broncos return to Lock with Bridgewater out with concussion 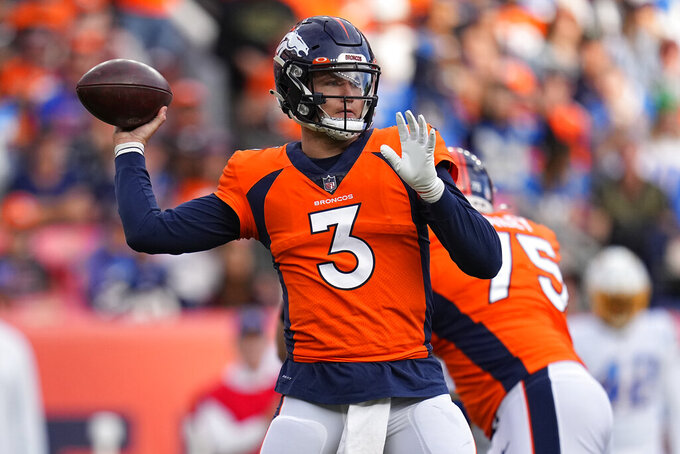 ENGLEWOOD, Colo. (AP) — Drew Lock is preparing for his first — and maybe final — start of 2021 for the Denver Broncos.

Coach Vic Fangio ruled out starter Teddy Bridgewater, who has a concussion, for their game Sunday against the Raiders but said it's possible he'll return next week against the Chargers if he's medically cleared: “Whatever’s best for his health moving forward is what we’ll do.”

So, Bridgewater will get his gig back if he's healthy even if Lock lights it up in Las Vegas.

“Teddy’s our quarterback,” Fangio said, “and if Teddy’s healthy, he’ll be the quarterback.”

Lock was thrilled just to be back taking the bulk of the snaps with the starters Wednesday.

“I woke up with a big smile on my face this morning, being able to come out here and be the guy this week for this team,” Lock said before taking almost all the snaps at practice for the first time in nearly a year.

Bridgewater was knocked unconscious while scrambling in the third quarter of Denver's 15-10 loss to the Bengals on Sunday. He was carted off the field after suffering his second concussion of the season and transported via ambulance to a hospital, where he was kept overnight.

Lock finished up, throwing a touchdown pass but also turning the ball over on a goal-to-go situation for the second time this season when defensive end Khalid Kareem wrested the ball away from him on a second-and-goal read option play at the 9.

Lock led the NFL with 18 turnovers last season, including 15 interceptions, to go with 16 touchdown passes.

Since coming out on the wrong end of the Broncos' quarterback competition in training camp, Lock has made three relief appearances for the oft-injured Bridgewater, who's sustained two concussions, a shin injury and a foot injury.

Lock has struggled in this backup role, completing just 55% of his throws (22 of 40) for 227 yards and a touchdown with two interceptions, two fumbles and five sacks.

“It’s an adjustment" going from starter to backup, Lock said. "It was a challenge to say the least. ... But now my focus is on winning this next one for us.”

Lock said he's a better quarterback for having been around Bridgewater as he's gleaned tips from the veteran both in the classroom and on the field.

Bridgewater was discharged from the hospital Monday and even though he's in concussion protocol, he's been communicating with Lock via text.

Both the Broncos and Raiders are 7-7 and likely have to win out to have a shot at the playoffs. But Fangio said he didn't think Lock would press given such high stakes

“I think he'll be better there, getting the whole week of practice, getting the bulk of the reps, going through the experience he's gone through this year, coming in mid-stream during a game, I think those will all work to his benefit," Fangio said.

Despite his spotty relief performances, Lock said he feels he’s a much-improved quarterback since his most recent start, on Jan. 3, against the Raiders.

“I absolutely do,” Lock said. “There’s a lot of work that’s gone into my game — mentally and physically — up to this point. It’s just — like I said, now it’s time to put it all together and go show that I am a better quarterback than I was.”

Even with his NFL future hanging in the balance, Lock said the only thing he thinks he has to prove Sunday is “that we can go out and win this game, not for me, but for this team.”

NOTES: With No. 3 QB Brett Rypien moving up to second string, the Broncos signed QB Anthony Gordon to their practice squad and made him their “quarantine QB” as Rypien had been. ... The Broncos activated starting DE Malik Reed from their COVID-19/reserve list after he missed two games. The Broncos also designated T Calvin Anderson and OLB Andre Mintze to return from IR, opening a three-week window to activate them to the 53-man roster. ... CB Essang Bassey was claimed off waivers by the Chargers.