Browns star Chubb out against Pats, remains on COVID list 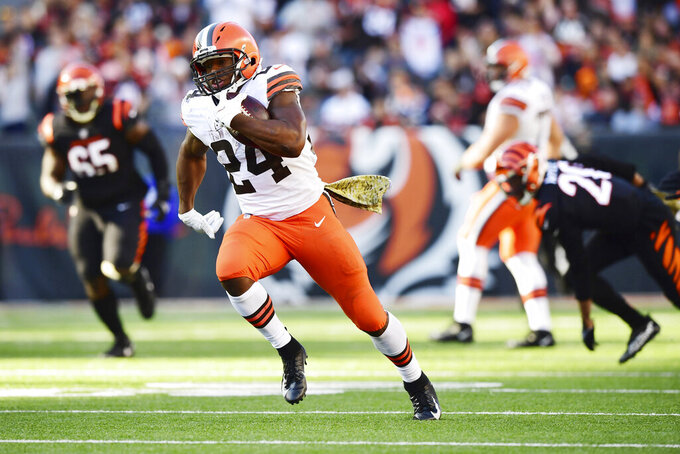 Browns' star running back Nick Chubb will miss Sunday's game against the Patriots after testing positive for COVID-19 earlier this week and then not passing protocols in time to be eligible to play.

The Browns (5-4) had held out hope that Chubb, who is third in the NFL with 721 yards despite missing two games with a calf injury, would be available to face the Patriots (5-4) after testing positive on Tuesday.

However, he needed to be symptom free and twice test negative. And the first negative test had to be no later than Friday because players must be activated from the reserve/COVID-19 list by Saturday at 4 p.m. to be eligible.

A two-time Pro Bowler, and one of the NFL's best backs, Chubb ran for 137 yards and scored two touchdowns, one a 70-yard run in which he clocked 21.1 mph breaking away from Cincinnati's secondary, in a 41-16 rout last week.

It's nothing new for the Browns to be down a player or two with injuries, but it's different when it's a player of Chubb's stature.

“He's one of the very best running backs in the league,” said 2020 All-Pro defensive end Myles Garrett. "Of course, it will be different, but it's next man up. Draw up different plays. We will try to do things a little bit differently for the men we have to create big plays rushing the ball on the offense.

"I don't think we will miss a beat because of the guys we have, but it's just different not having such a dominant force out there.”

With Chubb out and Kareem Hunt still on injured reserve and not ready, D'Ernest Johnson will make his second start Sunday. It's a familiar role for Johnson, who rushed for a career-high 146 yards and scored in a win over the Denver Broncos in his first start on Oct. 21.

“We have talked about him over the course of the last few games, and he showed in that Denver game where he had to carry the load and did a nice job,” Stefanski said of Johnson. "Our expectations for that room don't change.”

While Johnson is a solid back, he's not Chubb, and the Browns may not be able to rely on their top-ranked (160.2 yards per game) running game.

Belichick typically tries to eliminate what a team does best, so the Patriots will likely bring extra defenders closer to the line of scrimmage and force quarterback Baker Mayfield to throw more. Mayfield's coming off a solid game — 14 of 21 for 218 yards and two TDs — but he's also playing with an injured left shoulder and sore left foot, which limited his practice time earlier in the week.

Johnson has shown he's capable of handling whatever's necessary while running behind Cleveland's strong line. He's eager to do it again.

“I'm just ready to go out there and just try to go 1-0 this week,” he said when asked if he's ready to carry the ball 30 times. "That is our main focus is just going 1-0. When I get the opportunity, just try to make the most of them.”

NOTES: Garrett laughed and said he's ready in case Patriots QB Mac Jones grabs him around the ankle like he did to Carolina's Brian Burns last week. “If I tackle him or I sack him and I let him grab me, honestly, that’s on me,” Garrett said. "I’m not saying it’s on Brian. He didn’t expect it. But now we’ve all seen it. Now I know to get my behind up and get out the way.” ... DE Takk McKinley (groin) will miss Sunday's game. ... Rookie LB Jeremiah Owusu-Koramoah came through practice after missing three games with a high ankle sprain. The Browns have to activate him from injured reserve by Saturday evening for him to play. ... CB Greedy Williams (shoulder) is questionable.