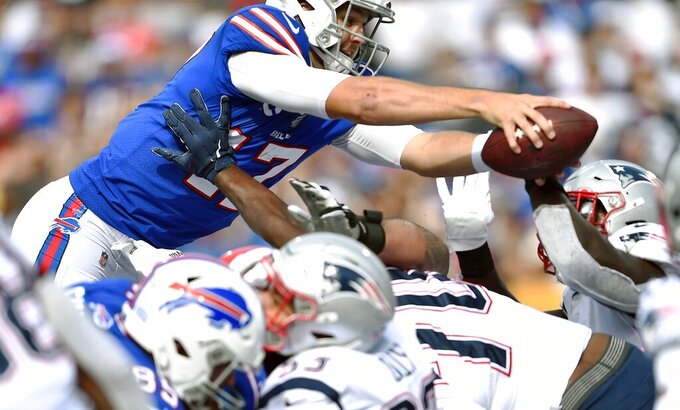 Buffalo Bills quarterback Josh Allen dives over the line of scrimmage to score a touchdown against the New England Patriots in the second half of an NFL football game, Sunday, Sept. 29, 2019, in Orchard Park, N.Y. (AP Photo/Adrian Kraus)

ORCHARD PARK, N.Y. (AP) — Buffalo Bills starting quarterback Josh Allen has been cleared from the NFL's concussion protocol and is expected to play against the Tennessee Titans on Sunday.

The team also says fullback Patrick DiMarco and safety Dean Marlowe have been cleared to play after spending the week in the protocol.

Allen was hurt following a helmet-to-helmet hit early in the fourth quarter of a 16-10 loss to New England last weekend. He was a limited participant in practice Wednesday and Thursday before practicing fully on Friday, when Buffalo listed his status as questionable.

Allen has rallied the Bills from deficits in each of their three victories this season. However, turnovers have been an issue. The second-year starter has thrown six interceptions and lost two fumbles.

DiMarco and Marlowe also were hurt against New England.

The Bills filled their open roster spot by promoting former Canadian Football League receiver Duke Williams off their practice squad. Williams spent the past two seasons with the Edmonton Eskimos and led the CFL with 1,579 yards receiving last year.