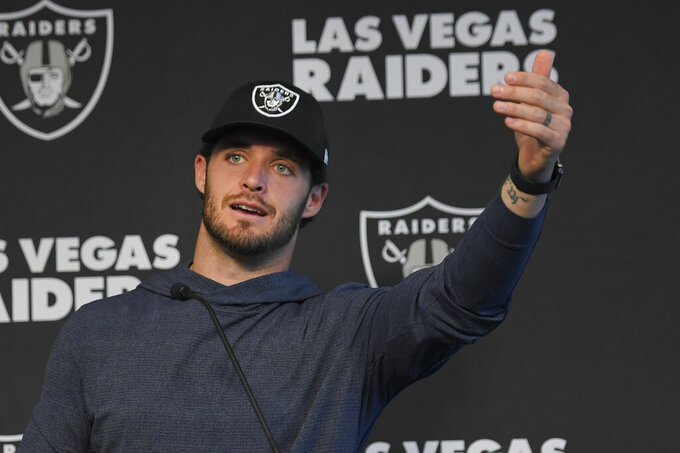 HENDERSON, Nev. (AP) — The Las Vegas Raiders have been operating with a “next man up” mentality since the start of the season while dealing with injuries throughout the lineup.

Sunday in Denver, the same mantra will apply with their coaching staff against the Denver Broncos.

With Jon Gruden tendering his resignation Monday amid reports of emails he sent before being hired in 2018 that contained racist, homophobic and misogynistic comments, longtime special Rich Bisaccia makes his debut as interim head coach of the Raiders.

Also, offensive coordinator Greg Olson will be the new voice in quarterback Derek Carr’s ears, calling the plays in a matchup that pits 3-2 rivals seeking their first win in October.

“Coach Olson is going to call the plays and he’s been intimate with coach Gruden in developing the plan for the game,” Bisaccia said. “I’ve been with coach Olson in Tampa. We won 10 games and he called every play, so I think we will be status quo that way. He has a great relationship with Derek. He’s been coaching the quarterbacks here for four years.”

Olson, who has been an offensive coordinator for five NFL teams, has experience as an offensive skipper dating to 1990, when the 58-year-old served in the same capacity at Central Washington. He was the quarterbacks coach at Purdue when Drew Brees was in college.

Olson has been a coach in the NFL since 2003, including a short stint with the St. Louis Rams from 2006-07, guiding one of the most potent offensive units of the era. He previously called the plays for the Raiders during Carr’s rookie season in Oakland, and has established trust with the eight-year veteran.

Olson, who returned to the Raiders as offensive coordinator when Gruden returned to coach the team in January 2018, got a ringing endorsement from Carr during his weekly media availability.

“I’ve heard his voice through the headset, I know how he calls the game and I know how he thinks,” Carr said. “We’re in the same room. Every conversation I had with coach Gruden, I had with Oly this whole time. And so us three, and now Johnny Mo (senior offensive assistant John Morton), we were all together all the time. It’s not going to be anything crazy new, but there are philosophies that some people have.”

Olson said this week’s process has remained the same despite being one man short, Gruden, and the staff feels good about the process, thanks to the staff the unit is surrounded with.

His long-standing relationship with Carr certainly helps, as Olson was part of the organization that drafted him. The two remained in contact after Olson was fired by the previous Raiders staff in 2014.

“I obviously have a lot of respect for the way his career has unfolded and a ton of respect for him now that I’ve had a chance to be with him again,” Olson said. “It’s a personal and a business relationship, which I think is important in that role I’ve had with him and going forward.”

Carr said he wasn’t prepared to give Olson’s secrets away, but hinted the Raiders could throw a different look at Denver.

“What’s great about Greg is how he utilizes personnel,” Bradley said. “He’s so consistent. He’s got a definite philosophy on how he wants to go about doing it and meshing things together. He knows this team so well, the offensive players and talent of them and he’ll do outstanding. I’ve got a lot of respect for him.”