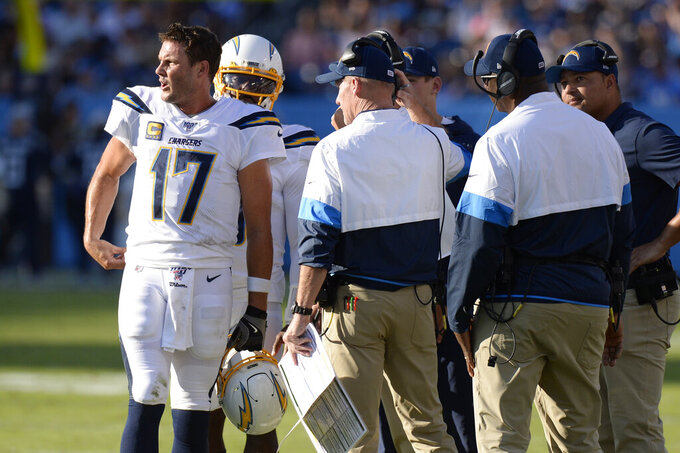 Los Angeles Chargers quarterback Philip Rivers (17) talks with coaches in the first half of an NFL football game against the Tennessee Titans Sunday, Oct. 20, 2019, in Nashville, Tenn. (AP Photo/Mark Zaleski)

COSTA MESA, Calif. (AP) — Anthony Lynn is hoping the Los Angeles Chargers can get into a better rhythm on offense with Shane Steichen calling the plays the rest of the season.

Lynn named Steichen as the team's offensive coordinator for the rest of the season on Wednesday, two days after Ken Whisenhunt was fired. The Chargers are a disappointing 3-5 and floundering on offense going into Sunday's game against Green Bay (7-1).

Even though Lynn said the offense's woes can't be blamed entirely on Whisenhunt, it was clear he had philosophical differences with the former coordinator.

"All coaches have fundamental differences. The important thing is we all come together and are all on the same page," Lynn said. "I felt like it was time. If I was eventually going to do it, right not right now? We still have everything in front of us."

Lynn has experience with in-season coordinator moves. He took over as Buffalo's offensive play-caller for the final 14 games in 2016 after Rex Ryan fired Greg Roman. Lynn then replaced Ryan as the interim coach for the final game that season.

This will be Steichen's first opportunity calling plays, but Lynn said Steichen is "young, innovative and players respond to him." Steichen has been coaching in the NFL for nine seasons, all but one with the Chargers. He was a defensive assistant in 2011-12 before going to Cleveland for a year as a quality control assistant on offense. He returned to the Chargers in 2014, spending two seasons as an offensive quality control assistant before taking over as quarterbacks coach in 2016.

Lynn said his role will be to make sure Steichen has all the resources he needs to call plays and to avoid looking over the interim coordinator's shoulder. He said Steichen will likely cut back and simplify the scheme to make sure everyone is on the same page.

Los Angeles is ranked 17th in the league in total offense and 28th in rushing. The Chargers have gained fewer than 40 rushing yards in four straight games, the first time a team has done that since the 1946 Detroit Lions.

The Chargers had only 12 rushing plays in last week's 17-16 win at Chicago, which Lynn said wasn't enough. He is hoping running backs Melvin Gordon and Austin Ekeler will be able to establish more consistency.

Gordon missed two months while holding out and has been ineffective since returning. The two-time Pro Bowler is averaging 2.6 yards per carry and has only one run over 10 yards in four games. Ekeler has been more effective as a receiver than as a running back. He has 51 receptions, which leads NFL running backs and is tied for sixth overall.

Offensive line coach Pat Meyer has taken on duties as run game coordinator as part of the shake-up.

"You have to give guys a chance to get into a rhythm or flow. Sometimes that happens with play-calling," Lynn said. "My frustration has been in us not winning. I think running can help that process, but believe me, I would throw it 50 times if it helps us win."

Ekeler said he was surprised Whisenhunt was fired, calling the move a reminder of how quickly changes can be made if a team is not performing.

"We haven't started out strong in games. We'll get in a rhythm with one drive and can't do it again," Ekeler said. "I know we are mixing things up again this week and try to build off that."

Lynn also doesn't want the Chargers getting off schedule on first down. The Chargers have a 45.2% success rate on first down, which is seventh-worst in the league. A successful first-down play is considered gaining at least 40% of the necessary yardage to move the chains.

The Chargers also have five turnovers in goal-to-go situations.

Philip Rivers is third in the league in passing yards (2,315) but is tied for sixth in interceptions with seven after throwing 12 last season.

"Shane has a lack of calling plays in his career but not a lack of football knowledge and understanding of the system," Rivers said. "You hate it got to where we stand today. You feel deep down that you had a hand in it, we all need to dig deep and get going."