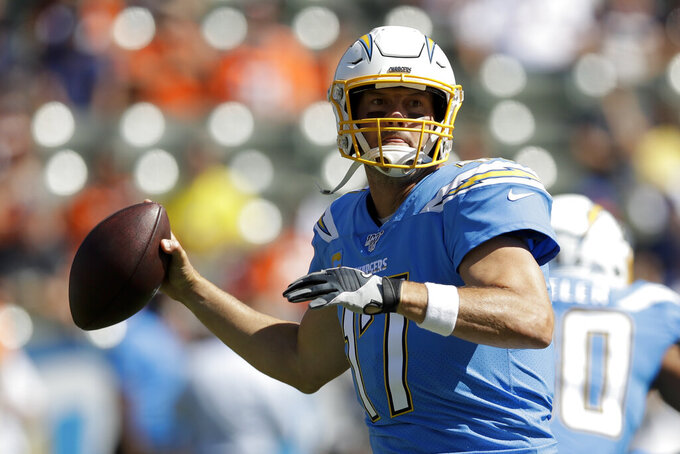 CARSON, Calif. (AP) — Melvin Gordon was flooded by familiar feelings after his delayed season debut with the Los Angeles Chargers.

Not many of those feelings were warm or fuzzy.

Instead, the star fifth-year running back has been transported back to the bad old days of his first three NFL seasons when his Chargers fell into an early hole in the standings and spent the rest of the year scrambling to get out.

Los Angeles (2-3) has a losing record after five games for the fourth time in Gordon's five seasons after its 20-13 loss to the previously winless Denver Broncos on Sunday. Even more embarrassingly, the Chargers failed to score an offensive touchdown for the first time since Dec. 13, 2015, ending a streak of 55 regular-season games.

When asked if he recalled any early season games that left him feeling as frustrated as this debacle, Gordon smiled and replied: "Plenty. But not for a while."

"We just couldn't get going," Gordon added. "What frustrated me most was being inside the 20, being right at the goal line and not converting. That's just not Chargers football. You know us. We get to the goal line, we're licking our chops (and) we usually get it in."

Gordon ended his holdout late last month only to return to a once-familiar litany of missed opportunities, untimely mistakes and a late comeback that fell short. He rushed for just 31 yards on 12 carries and caught four passes for 7 yards.

His fellow running back, Austin Ekeler, had 15 receptions on numerous check-downs, but managed just 86 yards. According to NFL.com, Ekeler is the first player since 1950 to make at least 15 catches without gaining 100 yards.

"We're an explosive offense," Gordon said. "We've got the talent. It was just one of those days where nobody could get going. It's unfortunate, man. It's crazy with all the talent we have. ... We're 2-3. It's a hole, but it ain't nothing we can't do if we play together. We've got some guys out, but that's no excuse."

Rivers and his veteran teammates have grown used to spending the entire autumn making up for the mistakes of late summer, but that doesn't mean they like it.

"We've been in this boat a lot," Rivers said. "Obviously you don't want to be, but we have been. This exact group hasn't been, but a lot of us have. We'll see how this group responds collectively."

Much of the blame for the Chargers' offensive ineptitude could be laid squarely at the feet of their 37-year-old quarterback. The Bolts desperately needed a strong game from Rivers with several key teammates sidelined, their franchise running back fighting rust and their entire offense running out of sync even before center Mike Pouncey left with an injury.

Instead, in his 213th consecutive regular-season start, Rivers failed to mount a touchdown drive in a game for only the eighth time in that stretch dating to 2006.

Rivers threw two interceptions, including a foolhardy throw late in the third quarter into double coverage in the end zone, where linebacker Alexander Johnson picked it off with ease. Rivers also committed a blatant intentional grounding penalty that pushed Los Angeles beyond rookie kicker Chase McLaughlin's field goal range in the second quarter.

The Chargers repeatedly failed to pick up easy points, even in difficult situations. After coach Anthony Lynn decided to go for a touchdown from the Denver 1 on the final snap of the first half instead of taking a field goal with his team down 17-0, Ekeler fumbled while trying to stretch the ball over the goal line.

"Me and the 1-yard line, we have an interesting relationship," Ekeler said, recalling his fumble at the 1 in a similar situation during a loss at Detroit last month. "We got all the way down there, but we've got to finish a drive. I don't know what it is. I honestly don't know. ... It's frustrating, but you've got to keep moving forward. We were getting chances. We just couldn't get any traction."