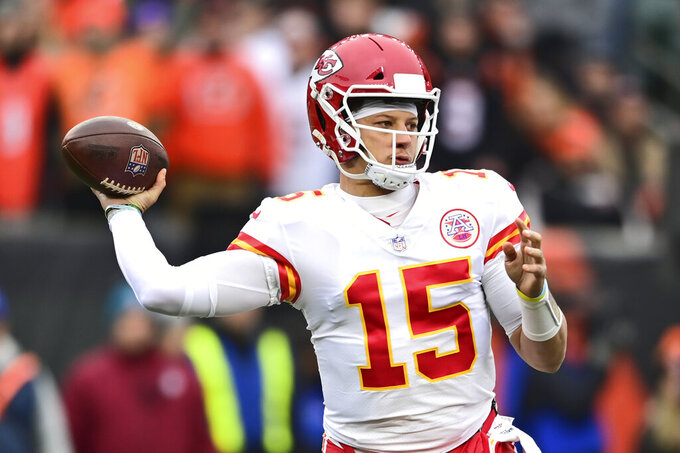 Kansas City Chiefs quarterback Patrick Mahomes looks to throw during the first half of an NFL football game against the Cincinnati Bengals, Sunday, Jan. 2, 2022, in Cincinnati. (AP Photo/David Dermer)

LINE: Chiefs by 10, according to FanDuel SportsBook.

TURNOVER DIFFERENTIAL: Chiefs plus-3; Broncos plus-2.

CHIEFS PLAYERS TO WATCH: DT Chris Jones had his third game with at least two sacks in last week’s last-second loss in Cincinnati. If he can pressure Drew Lock, it should make things much easier for a pass defense that was shredded by Joe Burrow last week.

BRONCOS PLAYERS TO WATCH: S Justin Simmons is one of three players (Quandre Diggs and J.C. Jackson) with five or more interceptions in each of the last two seasons. He was snubbed for the Pro Bowl but is wrapping up his best season.

KEY MATCHUP: Broncos running backs Melvin Gordon and Javonte Williams vs. Chiefs' run defense. Williams ran for 102 yards against the Chiefs last month when Gordon was out. Gordon rushed for 131 yards in his last game against the Chiefs, in 2020. Although the duo was slowed down by the Raiders and Chargers, Gordon and Williams have combined for 2,170 scrimmage yards and 16 touchdowns this season.

SERIES NOTES: The Chiefs have won 12 straight against their longtime division rival with their last loss coming Sept. 17, 2015. The Broncos have had their moments of late. They held Tyreek Hill and Travis Kelce to fewer than 50 combined yards in their last game and an incompletion that reviews showed might actually have been a fumble and TD return might have changed the tenor of that game a month ago. Prior to the Chiefs’ current streak, Denver had dominated the series with seven consecutive wins.

STATS AND STUFF: With a win in Denver and a Titans' loss at Houston, the Chiefs would secure the No. 1 seed in the AFC. ... Kansas City's 12-game winning streak in the series is tied for the league's eighth-longest since the 1970 merger. ... Coach Andy Reid is 35-6 against division opponents since 2015 and the Chiefs have won six straight AFC West titles. ... QB Patrick Mahomes is 12-0 as a starter in road divisional games. ... TE Travis Kelce needs 109 yards receiving for his fourth consecutive season of at least 1,200 yards. He needs 28 yards receiving to become the second Chiefs player and sixth tight end in NFL history with 9,000 yards receiving. ... Kelce and WR Tyreek Hill each have 56 career TD catches. They each need two more to pass Otis Taylor (57) for second in Chiefs history. ... Chiefs RB Darrel Williams had a career-high 88 yards rushing and 107 yards from scrimmage last week. He also tied a career-best with two TD runs. ... Lock is making his third consecutive start in place of injured starter Bridgewater. ... Lock completed 72% of his throws for 245 yards and a touchdown against the Chargers. ... Lock is aiming for his fourth consecutive start without an interception. He tied for the league lead last year with 15 interceptions and 18 turnovers overall. ... Gordon, who becomes a free agent after the season, is the only NFL player with nine or more touchdowns in each of the last six seasons. Gordon and Dallas' Ezekiel Elliott are the league's only running backs with 900-plus scrimmage yards in each of the last six seasons. ... Rookie RB Javonte Williams had a career-best 178 scrimmage yards in the teams' first meeting. He ranks third among rookies with 1,155 scrimmage yards. ... TE Noah Fant led the virus-depleted Broncos with six catches for 92 yards last week and scored his fourth TD of the season.