Chiefs' Clark tries to get going as Giants visit Arrowhead 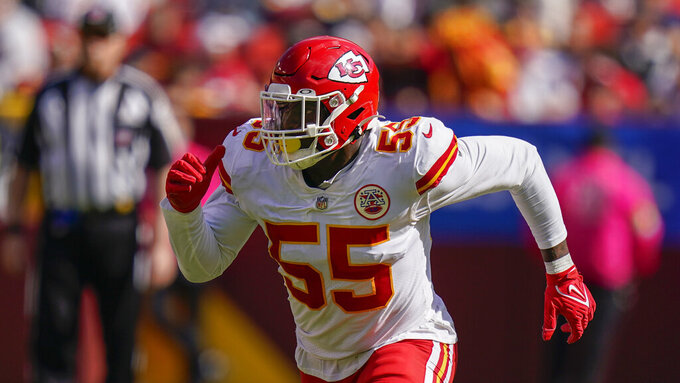 Kansas City Chiefs defensive end Frank Clark (55) running on the field during the first half of an NFL football game against the Washington Football Team, Sunday, Oct. 17, 2021, in Landover, Md. (AP Photo/Patrick Semansky)

KANSAS CITY, Mo. (AP) — Kansas City Chiefs defensive end Frank Clark was refreshingly honest this week when asked about how two gun-related arrests during the offseason have weighed on him, along with injuries to each hamstring just weeks apart that kept him off the field for long periods of time.

“At first, things hit me real fast," Clark said, “but at the end of the day, I have a job to do here with the Chiefs.”

It would be an opportune time to start doing it Monday night.

The two-time defending AFC champs are wallowing at 3-4 and already facing an uphill climb just to reach the playoffs as the New York Giants visit Arrowhead Stadium. And a big reason for their losing record has been a dismal defense that has been particularly bad when it comes to pressuring the quarterback — the job that Clark was brought in to do.

The Chiefs have just eight sacks this season, tied with lowly Jacksonville for fewest in the NFL.

No wonder just about every question lobbed at defensive coordinator Steve Spagnuolo this week had to do with getting pressure on the quarterback. The typically affable assistant coach was patient enough in pointing out a litany of injuries that have left him short-handed — defensive tackle Chris Jones and linebacker Anthony Hitchens have joined Clark on the bench for long stretches — but it also was clear Spagnuolo was starting to feel the pressure.

“Some of the teams we’ve played have been pretty good,” Spagnuolo said. "We’ve had the pass-run issues (where) we haven’t gotten them into the quote-unquote ‘passing situations’ I think as much as you want to. I mean, go back to the Cleveland game when we finally got ahead, it was different, and we could play a little bit differently.

"We’ve just got to get into those situations where we know it’s pass so we can pin our ears back and go.”

The problem with the Giants (2-5) is that while they don't do anything particularly well, one thing they do adequately is protect the quarterback. They have allowed just 14 sacks, putting them in the top half of the league.

Part of that success is thanks to the evolution of Daniel Jones as one of the game's promising young quarterbacks.

Jones is coming off a 23-of-33 passing performance against Carolina in which he threw for a touchdown, caused havoc with his legs and even made a nifty one-handed catch on a trick play. The result was a 25-3 rout of the Panthers.

Even better for Jones? It appears he'll have Sterling Shepard back from a hamstring injury and fellow wide receiver Kadarius Toney from an ankle injury, though stars Saquon Barkley and Kenny Golladay have been ruled out once again.

“They're a good defense," Jones said of the Chiefs. “They've been a good defense the past however many years. The Chiefs have been a top team in the league. They've got really good players on defense, guys that can disrupt the game and who can make big-time plays. I don't think there's anyone on our team or in this building who's going to overlook them.”

Nor are the Chiefs going to overlook the Giants. They've already exhausted their opportunities to overlook anyone.

“You've got to come in every day with that will to want to get better, that will to compete, and having that Super Bowl mentality — that championship mindset,” Clark said. “I feel like sometimes being successful like we've been, we kind of get ahead of ourselves. You start thinking to the playoffs, to the Super Bowl, to those games instead of thinking, ‘We’ve got the Giants this week.’ So, I feel like that has kind of been a problem.”

At least for Clark, the injuries and off-the-field issues have been an even bigger problem.

The Chiefs traded for the 28-year-old pass rusher in 2019, then promptly signed him to a $105 million, five-year contract that makes him one of the biggest salary cap hits in the entire NFL this season. He hurt his hamstring two weeks into training camp, missed all of the preseason and the opener, then hurt the other hamstring in practice. And along the way, he pleaded not guilty to gun-related charges from a March arrest, and recently he was charged for the second of two gun-related incidents during the offseason.

The result of all those injuries and distractions? Five tackles, 11 pressures and three hits without a sack to Clark's name over the past three games, numbers that are replacement-player level at the salary of an All-Pro pass rusher.

There's still time for him to turn things around, though. The same goes for the Chiefs.

“When you sit down and start re-evaluating things and you start just looking at the bigger picture, it’s really just taking one day at a time,” Clark said. "Starting yesterday, it’s, ‘Today, we’ve got this practice, then we’ve got this practice today, and the next day,’ and you keep on going that way, and then that enables you to put your all into one team instead of thinking too far ahead and thinking outside the box too much. I think that’s key.”