Chiefs defense still with plenty of room for improvement 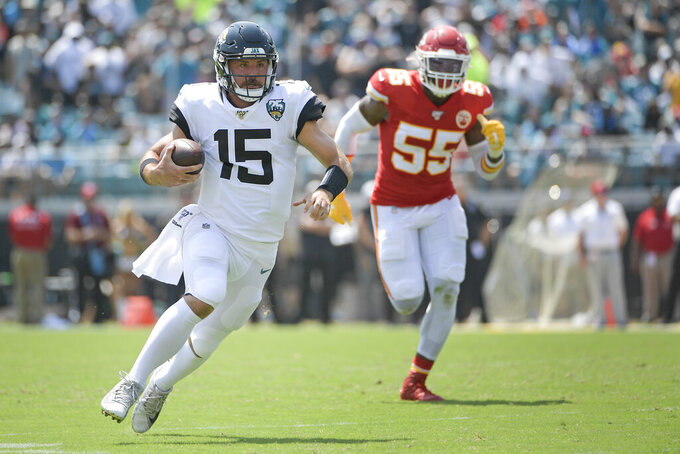 KANSAS CITY, Mo. (AP) — There were plenty of reasons for the Kansas City Chiefs to be optimistic their porous defense, a big reason they were eliminated in the playoffs a year ago, would be vastly improved this season.

Besides, it's not as if the Chiefs defense could get much worse.

Well, the Jacksonville Jaguars and their backup quarterback gave reason for concern last weekend, torching a defense that was clearly still learning a new system. Sixth-round pick Gardner Minshew, who took over when Nick Foles left with an injury, was a mere 22 of 25 for 275 yards with two touchdowns and an interception — which came off a tipped pass.

His completion rate of 88 percent was the highest in league history for any quarterback with at least 15 pass attempts while making his first appearance in an NFL game.

"There are things we can do better all the way around in all three phases of our games," Chiefs coach Andy Reid said. "I sure liked the effort. The more those guys play together and with the system, I just think the sky is the limit."

It wasn't a complete debacle. The Chiefs did roll to a 40-26 win on the road. And they did make a few plays on defense, forcing a couple of turnovers and keeping running back Leonard Fournette in check.

They also looked as if they knew what they were doing most of the time, which is no small thing when a team is converting to a 4-3 system from its old 3-4 base. There was minimal confusion, and that allowed the Chiefs to play reasonably fast on defense.

"I want to say there was 58 snaps, we got everyone lined up on every one," said Anthony Hitchens, whose job at middle linebacker includes making sure everyone knows where they are supposed to be.

"There was one where they blew up the formation and went empty and we had a massive check and didn't get to it," he said, "but other than that everyone was on the same page for the most part for the whole game. My coach didn't come to me and say I closed this front wrong or anything like that. I think we're all getting it and I'm sure every week we're going to add more to our plate."

Claiborne was signed late in camp, so he'll face a steep learning curve. But he'll still likely push Charvarius Ward, who was targeted mercilessly by Jacksonville, out of the starting lineup.

The Chiefs might not be done adding talent, either.

They made some moves this week to restructure the contracts of Hitchens and left tackle Eric Fisher, converting base salary to signing bonuses and freeing up more than $10 million in salary cap space. That gives the Chiefs more than $20 million in total cap space should they acquire another cornerback before the Oct. 30 trade deadline.

Of course, that money could also come in handy after the season when the Chiefs are faced with the prospect of signing quarterback Patrick Mahomes to what could be a record-setting extension.

Regardless, the Chiefs head to Oakland this weekend knowing full-well there is still plenty of room to improve on defense. It's a job that has been ongoing for years.

"I liked how aggressive we were (in Jacksonville)," Reid said. "I thought the intensity maintained strong and the tempo was fast throughout the game. I think the guys are in shape. I just think it is becoming even more familiar with the defense. I think that as time goes on here, I think they'll just keep getting better and better in that way."

Notes: WR Tyreek Hill attended practice Thursday with his arm in a sling. He's expected to miss about six weeks with a fractured collarbone. ... OL Jimmy Murray was waived from the practice squad to create space for WR Byron Pringle, who was signed after he was released from the active roster.