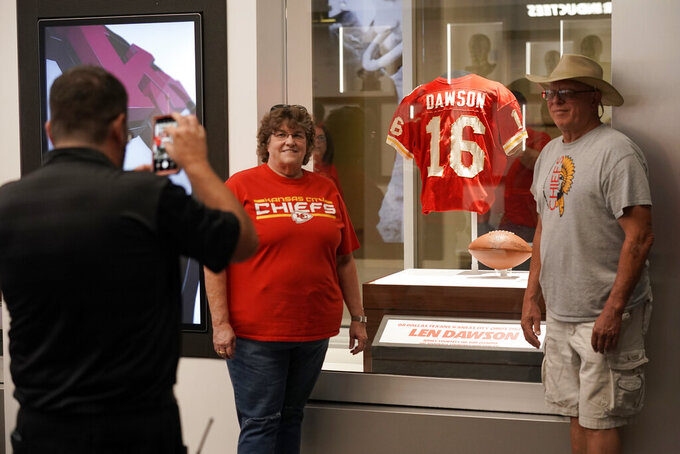 Fans have their photos made while standing next to the jersey of former Kansas City Chiefs quarterback Len Dawson before the start of an NFL preseason football game Thursday, Aug. 25, 2022, in Kansas City, Mo. Dawson, who helped the Kansas City Chiefs to their first Super Bowl title and is in the Pro Football Hall of Fame as a player and broadcaster, died Wednesday at the age of 87. (AP Photo/Charlie Riedel) 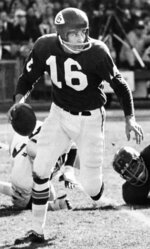 KANSAS CITY, Mo. (AP) — It seemed only fitting that, one day after Hall of Fame quarterback Len Dawson's family announced his death at the age of 87, the Kansas City Chiefs played the Green Bay Packers on Thursday night in a preseason rematch of the first Super Bowl.

It was that title game on a sunny January day in 1967 when many fans first saw “Lenny the Cool.”

Televised simultaneously by CBS and NBC from Los Angeles Memorial Coliseum, the inaugural meeting of the champions of the powerful NFL and upstart AFL was close into the second half. But that's when the Vince Lombardi's powerful Packers pulled away for a 35-10 victory over an exhausted Dawson and his plucky bunch of Chiefs.

Dawson would get his Super Bowl ring, of course. He led the Chiefs back three years later, where Kansas City would beat the Minnesota Vikings in the final championship game staged before the NFL and AFL merged together.

“As a child, I just remember being on the Chiefs' field and looking up at Len,” Chiefs chairman Clark Hunt recalled. “Of course, as a child, all the players were huge and he was one of the smaller ones of the group. But he was the one with the ‘it’ factor. He was the leader of the team. And I remember looking at him like that.”

Not surprisingly, the Chiefs found plenty of ways to remember Dawson on Thursday night.

Patrick Mahomes, who became close to Dawson in recent years, wore a hoody with his predecessor’s image on the back of it. The Chiefs’ helmets carried his No. 16 on them. And on the Chiefs Radio Network, where Dawson flourished in a second career as a Hall of Fame broadcaster, stories of Dawson flowed during a lengthy pregame tribute.

Elsewhere in Kansas City, the fountains outside historic Union Station were specially lit to celebrate his life.

Perhaps most poignantly, though, Mahomes trotted onto the field for the only time all game — the Chiefs' first offensive possession — and lined up his players in the same kind of stacked huddle that Dawson employed.

The Chiefs took a delay of game penalty, Mahomes trotted off the field and the preseason game resumed.

“I've had people reach out to me and say, ‘Hey, I cheered for the Chiefs because of Len Dawson when I was a little kid, even though I didn’t live in Kansas City,” said the 57-year-old Hunt, whose father Lamar Hunt helped found the AFL along with the Chiefs, who began play as the Dallas Texans before moving north a year after Dawson arrived.

The young Hunt remembers growing up in the locker room in the 1970s, and how Dawson always kept an eye out for him.

“He’s synonymous with the success of the early Chiefs organization, and those early teams that really helped establish the Chiefs in the American Football League,” Hunt said. “But when you step back and think about him in terms of Kansas City, he is synonymous as someone who cared about the community and finding ways to give back.”

Dawson, who was also known to millions for his work on HBO's iconic “Inside the NFL,” had been in declining health the past few years. He went into hospice care on Aug. 12 before dying this week with his wife, Linda, by his side.

While he had stepped back from the public spotlight, Dawson remained a revered figure around Arrowhead Stadium, where the television broadcast booth was named in his honor. Much of his memorabilia is on display in the team's Hall of Fame, and his name hung between former teammates Mike Garrett and Bobby Bell in the stadium's ring of honor.

“I probably didn’t appreciate it at the time because I was fairly young,” Hunt said, “but I’ve come to appreciate it over the last 20 or 30 years — when I run into someone who is not from Kansas City but they’re a fan of pro football, they will frequently bring up Len Dawson’s name. That’s who they remember from those early Chiefs.”