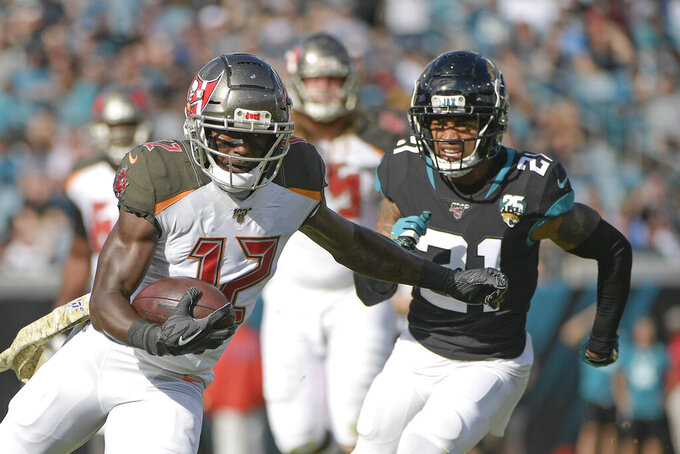 The Indianapolis Colts know what it takes to thrive under the pressure of a race for a playoff berth. The young Tampa Bay Buccaneers are trying to learn.

A year after staging a torrid stretch run to make the postseason in their first season under coach Frank Reich, the Colts (6-6) find themselves in a familiar position of needing to win their last four games to give themselves a good shot at earning another berth.

The Bucs (5-7) have won three of four following a 2-6 start and vow to keep fighting until they are mathematically eliminated from contention.

“They’re a team that’s in the same situation as us,” Tampa Bay coach Bruce Arians said. “It’s a one-game season.”

The Colts know all about that after overcoming a 1-5 start last season by winning nine of their last 10 — including four straight down the stretch in December — to grab an AFC wild-card berth.

Jacoby Brissett is quarterback this year instead of the retired Andrew Luck, but the challenge remains the same as Indianapolis tries to right itself after dropping four of five to fall from first to third place in the AFC South.

“Obviously, we would have liked not to be in that position again, but we’re here and we know we have to win games,” Colts tackle Anthony Castonzo said.

“Frank (Reich) did a good job speaking about that and what you did to this point doesn’t matter. You can’t rely on any of that information in the future. ... I know everybody on this team is committed to playing one week at a time,” center Ryan Kelly added. “Obviously, we have a tough four games ahead, but if you take it one game at a time, you’ll be fine.”

Arians, the former Cardinals coach who also led Indianapolis to the playoffs as interim coach for 12 games in 2012, said the Bucs will benefit from a strong finish — even if it doesn’t produce Tampa Bay’s first playoff in 12 years.

“We talked about it. ... If you want to feel like you’re in the playoffs, you’re in it. Right now,” Arians said. “They are one-game seasons. You lose, you’re done. Then you play for fun.”

Reich hasn't spent much time over the years around Bruce Arians. But he's heard plenty of stories about the longtime assistant and has plenty of respect for the man who earned the first of two coach of the year awards filling in for Indy coach Chuck Pagano in 2012.

And Reich figures not much has changed as Arians completes his first season as Tampa Bay's head coach.

"I guess there are guys like (Bill) Belichick where you're like, 'Don't try to be like him,'" Reich said. "You try and be like Bruce Arians. I could never pull that off, I don't know if anybody could from what I understand. You just know the players that play for him — they will die for him."

The Bucs defense is tied for fifth in the NFL with 21 takeaways. That’s four more than they had all of last season, when Tampa Bay ranked 22nd.

Nine players have forced fumbles, eight have recovered an opposing team’s fumble, and eight have interceptions.

The unit has also scored four touchdowns, compared to one in 2018.

Hilton returned from a calf injury against Houston two weeks ago but sat out last week after aggravating the injury in practice. He did not work out Wednesday and with only four regular-season games left, some wonder if he'll make it back this season.

Indy finished last week's game with only three healthy receivers after Chester Rogers suffered a season-ending knee injury on the Colts' opening series. Chad Williams was promoted from the practice squad earlier this week and the Colts could get more help if rookie Parris Campbell (hand) can play.

Arians has not committed to making Jameis Winston the long-term answer at quarterback for the Bucs.

Pro Bowl linebacker Darius Leonard thinks Winston has everything it takes to thrive in that role, though.

The Colts' defensive leader provided his own scouting report, full of the intangibles he witnessed as the two worked out together during the offseason.

"He can throw the ball," Leonard said. "I know what kind of guy he is, I know what kind of leader he is and he's throwing the ball to a lot of his receivers. He knows how to make a play down the field. He's definitely one of those great quarterbacks."