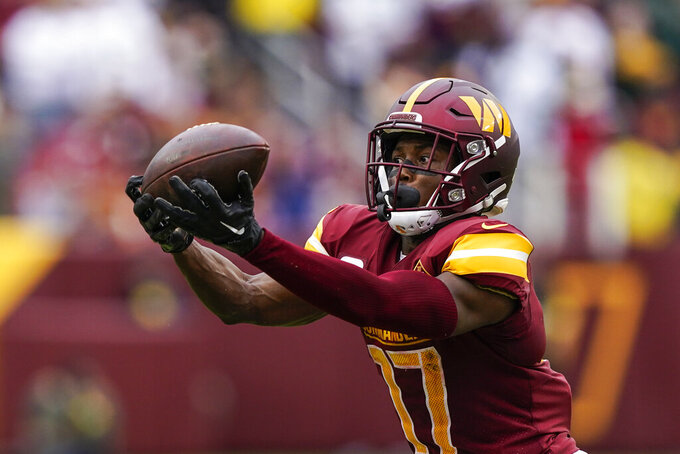 BETTING LINE: Colts by 3, according to FanDuel Sportsbook.

TURNOVER DIFFERENTIAL: Commanders minus-5; Colts minus-7

COMMANDERS PLAYER TO WATCH: RB Antonio Gibson had become somewhat a forgotten man in the offense, with rookie Brian Robinson making starts following his return from a gunshot wound. But Gibson had a strong game last week with 10 carries for a season-high 59 yards plus three catches for 18 yards and a touchdown.

COLTS PLAYER TO WATCH: QB Sam Ehlinger. The former Texas star almost certainly will throw his first NFL pass in his starting debut, six days after the injured Matt Ryan was benched. Ehlinger's improved accuracy and arm strength have impressed those inside the organization. Now he can show everyone what he can do. Plus, Ehlinger's legs should help him evade pass rushers.

KEY MATCHUP: Washington pass defense vs. Ehlinger. Having not much tape on Ehlinger could complicate the defensive game plan. But the real question is whether Ehlinger can avoid the mistakes and negative plays that have been so problematic this season. Washington allows 217.6 yards passing and has just two interceptions, perhaps giving Ehlinger a better chance of success.

SERIES NOTES: Indy has won four straight and five of six in this series, going back to 1999. ... From 1981-1996, Washington won five of six. ... Washington has won twice in Indianapolis, but only once since the Colts first season in 1984. ... Former Washington coach and NASCAR team owner Joe Gibbs, a three-time Super Bowl champion, has won five Cup races in Indy, most recently in 2016.

STATS AND STUFF: Washington has rebounded from a four-game skid by winning two straight. One more would produce its first three-win October since 2018. ... The Commanders ran for a season-best 167 yards last week. It's the first time in nearly two full years — November 2020 — they've had two running backs top 55 yards in a game. ... With injuries and shakiness along the offensive line, QB Taylor Heinicke adds an important element of mobility in place of Carson Wentz. Washington allowed a season-low one sack against Green Bay. ... Heinicke will make his 18th career start and can even his record at 9-9 with a win. ... Terry McLaurin needs 13 receptions to pass Gary Clark (261) with the most catches in franchise history through four seasons. ... Commanders defensive line coach Ryan Kerrigan and Colts left tackle Dennis Kelly were teammates at Purdue. ... The Colts have won two of three overall and are 2-1 at home this season. ... Super Bowl 52 MVP Nick Foles will serve as Ehlinger's backup. ... Ryan is missing his first game since 2019 and just the fourth time in a 15-year career. ... RB Jonathan Taylor returned to the lineup last week after missing two games with an ankle injury. If he tops 100 yards, he will move past Hall of Famer Marshall Faulk for fourth on the Colts list with 100-yard games. Faulk did it 14 times. If he tops 100 yards and runs for a TD, he will surpass Hall of Famer Eric Dickerson for second in franchise history Dickerson reached it 13 times. ... Indy's run defense has allowed only eight 100-yard runners since 2018, tied for second in the league. ... Colts P Matt Haack ranks last among the NFL's 31 qualifiers with an average of 42.2 yards. His longest punt last week, 60 yards, resulted in a touchback and he averaged 29.0 yards on his other four kicks.

FANTASY TIP: Taylor. Sure, the Colts have struggled to run the ball this season and, yes, Taylor missed two games with an injured ankle. But with a new starting quarterback, expect Ehlinger to rely heavily on the reigning NFL rushing champion on the ground and through the air.