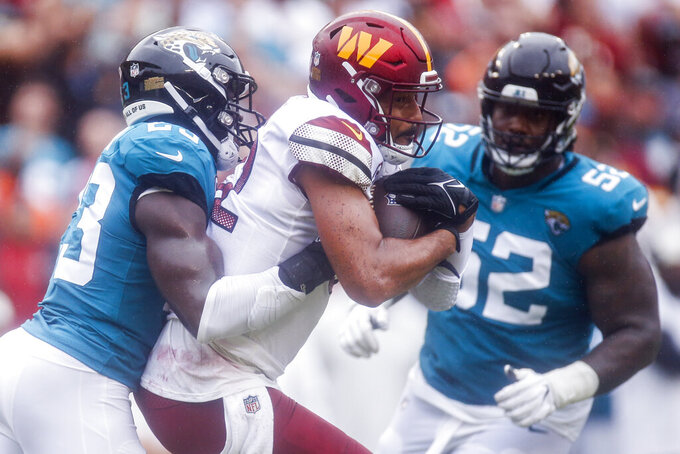 Washington Commanders tight end Logan Thomas (82) carries the ball as Jacksonville Jaguars cornerback Josh Thompson (23) and defensive tackle DaVon Hamilton (52) defend during the first half of a NFL football game between the Washington Commanders and the Jacksonville Jaguars on Sunday, Sept. 11, 2022 at FedExField in Landover, Md. (Shaban Athuman/Richmond Times-Dispatch via AP)

OPENING LINE: Colts by 4½, according to FanDuel SportsBook.

AGAINST THE SPREAD: Indianapolis 0-1; Jacksonville 0-1.

TURNOVER DIFFERENTIAL: Colts minus-1; Jaguars plus-2.

COLTS PLAYER TO WATCH: RB Jonathan Taylor made his NFL debut against the Jags in 2020 after Marlon Mack injured a knee. In three starts against Jacksonville, Taylor has 446 yards rushing, averaging 6.8 yards a carry, and three scores. And the league’s defending rushing champ is second this season after running for 161 yards and a TD in the opener.

JAGUARS PLAYER TO WATCH: LB Travon Walker looks to add to his impressive NFL debut. The No. 1 overall pick had four tackles, including a sack, and an interception at Washington. He’s the first NFL player since 2018 to get a sack and an interception in his first game.

KEY INJURIES: The Colts are waiting to see if three-time All-Pro LB Shaquille Leonard plays. He missed offseason workouts because of an ankle injury and then sat out training camp, the preseason and the opener following back surgery in June. He’s been able to practice the past two weeks.

SERIES NOTES: Jacksonville has won seven straight home games against Indy, including one played in London in 2016. The streak includes the 2020 season opener, the Jags’ only win that season, and last year’s season finale that eliminated the Colts from the playoffs. ... How even has this series been recently? Indy and Jacksonville have split the past six meetings, with each scoring 135 points in those games. ... New Colts QB Matt Ryan is 4-0 against the Jags, but will be making only his third trip to Jacksonville in 15 seasons. He played his first 14 in nearby Atlanta. ... Ryan and former Falcons teammate Oluokon will face off for the first time.

STATS AND STUFF: Last week’s tie put Indy atop the AFC South for the first time heading into Week 2 since 2013. ... Ryan needs four completions to pass former Chargers and Colts QB Philip Rivers (5,277) for No. 6 in NFL history. ... Taylor needs one TD to top the 200-point mark in his career and is tied with Hall of Famer Marshall Faulk for the fourth-most 100-yard games (14) in franchise history. Taylor also is tied with Hall of Famer Eric Dickerson for the franchise’s second-most games with 100 yards rushing and at least one TD run (13). ... Colts WR Michael Pittman Jr. had his fourth career 100-yard game last week. .. DE Kwity Paye, who had four sacks as a rookie in 2021, is tied for third in the NFL after logging two in the opener. ... Indy’s defense has allowed only six 100-yard rushers since 2018, the second fewest in the league. ... The Colts had seven penalties last week after being called for 76 last season, the NFL’s third-lowest total. … Colts DE Yannick Ngakoue and DC Gus Bradley return to Jacksonville. Ngakoue spent the first four seasons of his career (2016-19) with the Jags. Bradley was the franchise’s fourth head coach (2013-16).

FANTASY TIP: Taylor and WR Michael Pittman should be considered locks to start for Indy. Same goes for Jaguars RB James Robinson and WR Christian Kirk. Jaguars WR Zay Jones is a decent sleeper option. He was targeted nine times in the opener, finishing with six receptions for 65 yards.