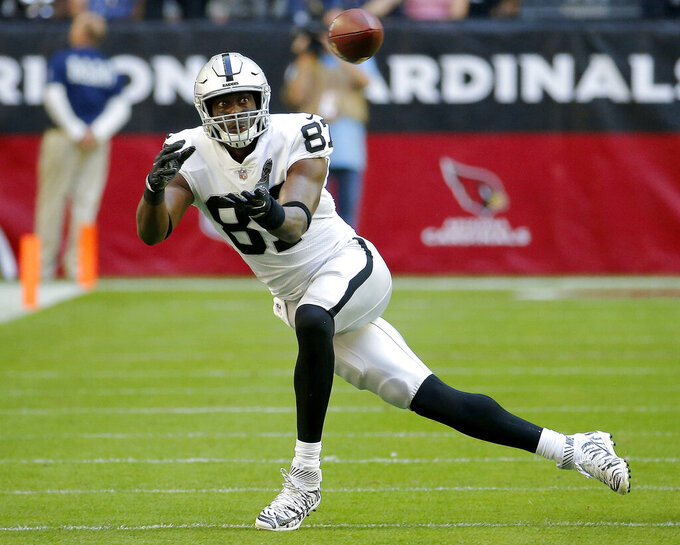 FILE - In this Nov. 18, 2018, file photo, Oakland Raiders tight end Jared Cook (87) makes a catch against the Arizona Cardinals during the first half of an NFL football game, in Glendale, Ariz. Saints general manager Mickey Loomis says 2018 Pro Bowl tight end Jared Cook has agreed to the terms of a free-agent contract with New Orleans. The 6-foot-5, 254-pound Cook is a 10-year veteran coming off his best season yet. He caught 68 passes for 896 yards and six touchdowns with Oakland last season and was named to the Pro Bowl for the first time.(AP Photo/Rick Scuteri, File)

NEW ORLEANS (AP) — Moving from Oakland to New Orleans was as much a personal choice as a professional one for 2018 Pro Bowl tight end Jared Cook.

"Location. Quarterback. Offense," Cook began. "It's important that at this point in my career — I think it's awesome — that I'm closer to home. Drew Brees is a great quarterback, approaches the game like true vet and like a true perfectionist. He does all the little thigs right.

"I also have a chance to come in right now and make an impact," Cook added Wednesday, a day after formally agreeing to a reported two-year, $15.5 million free-agent contract with New Orleans. "I have an opportunity to come in and be a huge part of a prolific and high-powered offense."

Cook complimented the Raiders for the way they played to his strengths and helped him have the best campaign of his 10-year career last season. He knew there were inherent risks in leaving a good situation. But he said those risks were mitigated considerably by what New Orleans had to offer.

The Saints have been among NFL leaders in offense since coach Sean Payton began designing the plays and Brees began executing them back in 2006. There have been some seasons, particularly while Jimmy Graham was on the roster, when the tight end position accounted for a significant portion of the passing offense.

But that did not happen for the Saints' eighth-ranked offense last season. Three tight ends — Ben Watson, Josh Hill and Dan Arnold — combined for 63 catches for 735 yards and four touchdowns. And Watson, who led the position group with 35 catches for 400 yards and two TDs, has retired.

The 6-foot-5, 254-pound Cook caught 68 passes for 896 yards and six touchdowns with Oakland last season and was named to the Pro Bowl for the first time.

"The last few years I've been able to kind of learn under one offense, play with one quarterback, get to know that one quarterback pretty well," Cook said. "That's been the biggest different in the transition of my career as of late — and they actually used me what I'm good at."

Cook said Raiders coach Jon Gruden "found ways to expose matchups all over the field. He found ways to move me around in different positions to actually help me and make me more versatile."

In Payton's first NFL job in Philadelphia, he worked under Gruden, and the two offensive-minded coaches have philosophical similarities. Payton also is known for shifting players' roles — sometimes considerably — from week to week in search of favorable matchups.

Cook was well aware of that because his tight ends coach in Oakland was Frank Smith, who worked on Payton's staff in New Orleans from 2010-14. Cook said Smith often would touch on his experience with New Orleans when they talked football.

"So, I knew a lot about the Saints and the guys in that building before I got down there," Cook said.

Another attraction was the opportunity to stress a secondary in tandem with Saints top receiver Michael Thomas.

Cook, who turns 32 next month, was born in Alabama and grew up outside Atlanta, where he often watched the Falcons practice from a hilltop with his father. He played in college at South Carolina and began his NFL career with Tennessee, which traded with New England to get him during the third round of the 2009 draft.

He spent his first four seasons in Tennessee, where in 2011 he had 49 catches for 759 yards and three touchdowns.

Cook later spent three seasons with the St. Louis Rams and one season with Green Bay before joining Oakland two seasons ago. In his career, Cook has 425 catches for 5,464 yards and 25 touchdowns.

Being back near the Southeast puts Cook, who is married with children, in more manageable proximity to extended family and friends, he said. He sees that not as a distraction, but rather as a way to focus on football with greater peace of mind.

"I have a bigger support system. I have more people around me and more family around me that can kind of help with daily life a little bit more," Cook said. "It's going to help me and my family out quite a bit."