Cowboys could target cornerback, pass rusher at top of draft 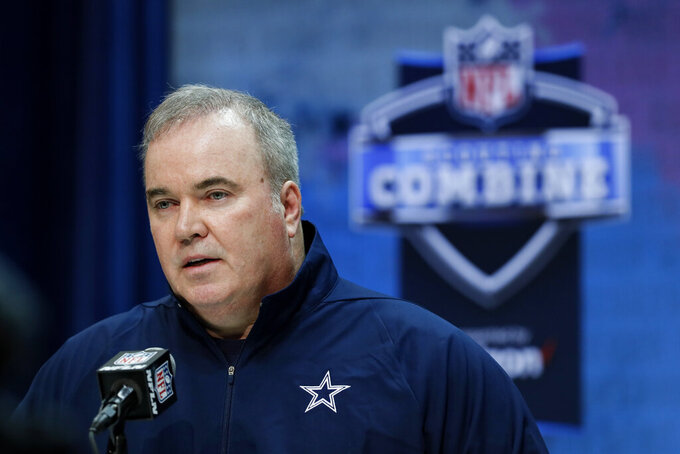 The two biggest losses in free agency for the Dallas Cowboys were at cornerback and defensive end, so it's reasonable to list those as the club's top two priorities going into the draft.

Dallas is back in the first-round business with the 17th overall pick after sitting out opening night a year ago because of the 2018 midseason trade for receiver Amari Cooper, who recently signed a $100 million, five-year contract.

Safety has been a persistent need for the Cowboys in recent years, but it's been nearly 20 years since they drafted a prototypical safety in the first round. Dallas did add Ha Ha Clinton-Dix in free agency.

The Cowboys are headed in a new direction philosophically on defense under first-year coach Mike McCarthy, who was hired after Jason Garrett's contract wasn't renewed when Dallas fell short of lofty expectations by missing the playoffs.

Dallas added two free agents in prototypical nose tackle Dontari Poe and another big body for the interior of the defensive line in Gerald McCoy. And McCarthy has said he prefers finding ways for the best available players to fit.

“I’m not a believer in you're one player away or two players away from winning a championship,” McCarthy said at the scouting combine. “I’m really looking forward to coaching a more experienced football team, but that rookie class is so important.”

The wild card for the pass rushing needs is the availability of Aldon Smith and Randy Gregory. Both are seeking reinstatement from suspensions with the more lenient policy on marijuana in the new labor deal. Dallas signed Smith to a one-year deal even though he hasn't played since 2015.

Assuming quarterback Dak Prescott eventually has a new contract either through the franchise tag or a long-term deal, the Cowboys are in the market for his next slot receiver after Randall Cobb left for Houston in free agency.

While it's a deep draft at receiver and it's not out of the question Dallas could use a first-round pick there, the signing of Cooper and the steady progress of third-year man Michael Gallup mean that spot isn't a desperate need.

The Cowboys likely won't be rushing to replace Travis Frederick in the early rounds after the 29-year-under center surprisingly retired last month.

They drafted Connor McGovern in the third round last year believing his value was higher, and McGovern played some center at Penn State. He didn't play as a rookie because of a torn arm muscle.

Dallas also re-signed Joe Looney, who filled in for Frederick the entire 2018 season when the Cowboys won a playoff game for the first time with Prescott and star running back Ezekiel Elliott.

It appears Jason Witten's time in Dallas is finished once and for all. He returned last season after a year in retirement as a broadcaster in 2018, still as the No. 1 tight end but without the same tight grip on the top spot.

Now that he's gone again, the Cowboys appear ready to let Blake Jarwin take the lead role after signing Witten's former backup to a four-year contract. But he doesn't fit the mold of a blocking tight end.

While Dallas signed Blake Bell in free agency and still has 2018 fourth-round pick Dalton Schultz on the roster, adding a tight end in the draft isn't out of the question.

The top of the depth chart doesn't indicate an immediate issue for the Cowboys at linebacker. But questions linger.

Leighton Vander Esch, a first-rounder in 2018, was limited to nine games last season by a neck injury that required surgery and could threaten his career. He is on track to return, though.

Jaylon Smith wasn't quite as dynamic in 2019 after showing a complete recovery from a devastating college knee injury that sidelined him as a rookie in the NFL. His strong 2018 season earned him a $64 million, five-year extension last August.

Sean Lee is back for an 11th season and offers a solid veteran presence around Vander Esch and Smith, but injuries have plagued his career. Add it all up, and linebacker is a position that could use some help in the draft.

Corrects to Connor McGovern instead of Connor McGregor in “Replacing Frederick” item.