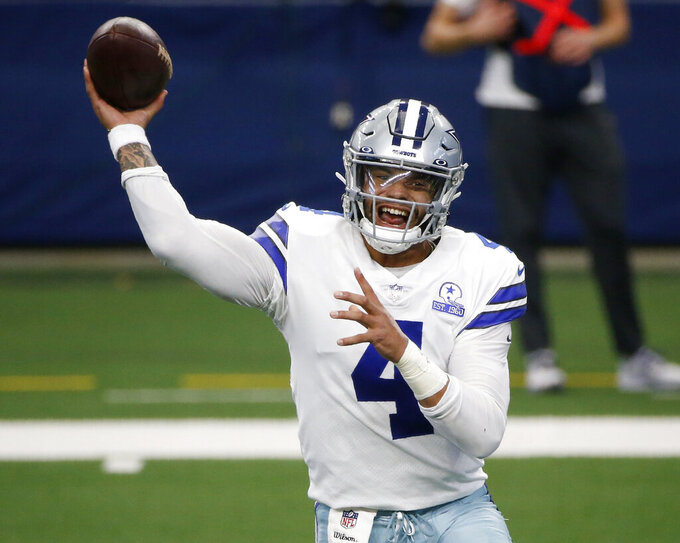 FILE - In this Oct. 11, 2020, file photo, Dallas Cowboys quarterback Dak Prescott throws a pass in the first half of an NFL football game against the New York Giants in Arlington, Texas. The Cowboys and Prescott have finally agreed on a contract two years after negotiations began with the star quarterback. The team the agreement was reached Monday, March 8, 2021, with further details to be announced. (AP Photo/Michael Ainsworth, File)

The Dallas Cowboys and Dak Prescott have finally agreed on the richest contract in club history, two years after negotiations first started with the star quarterback.

The team said the agreement was reached Monday. It's a $160 million, four-year contract with $126 million guaranteed and an NFL-record $66 million signing bonus, according to a person with knowledge of the deal who spoke to The Associated Press on condition of anonymity because details weren't announced.

The deal comes a day before a deadline to put the franchise tag on Prescott for a second straight year at a salary cap charge of $37.7 million. The new contract will lower that cap hit.

Prescott played on a $31.4 million franchise tag in 2020 before his season ended with a compound fracture and dislocation of his right ankle in Week 5.

At $40 million per season, Prescott is second in the NFL in annual salary to Kansas City's Patrick Mahomes, who is at $45 million annually in a $450 million, 10-year deal that could eventually exceed $500 million in value. Houston's Deshaun Watson is third at $39 million annually.

The 27-year-old Prescott is the fourth Dallas player to get a $100 million contract after Tony Romo, the injured quarterback he replaced and ultimately sent into retirement, and two teammates in defensive end DeMarcus Lawrence and receiver Amari Cooper.

Lawrence was among plenty of teammates reacting to the news on social media, tweeting, “HE’S BAAAAAACCCKKKK,” while Prescott's brother, Tad, posted a photo of the two hugging after Prescott got the call about the deal.

Before the gruesome injury against the New York Giants in October, Prescott had started every game since the beginning of his rookie year after Romo injured his back during the 2016 preseason.

Prescott won NFL Offensive Rookie of the Year honors while leading the Cowboys to the No. 1 seed in the NFC and two years later won his first playoff game while reaching his second Pro Bowl.

Negotiations on a new contract started the following offseason, when Prescott was going into the final year of a four-year contract that paid him a total of about $4 million as a fourth-round pick. That included $2 million in the final season.

Prescott got a 1,500% raise with his first franchise tag, which locked in another increase for a second tag despite the salary cap going down because of the NFL’s revenue dip in the pandemic.

With a new contract, the Cowboys will get salary cap relief they're expected to need with the cap falling from $198 million to possibly as low as $180 million. The cap has risen about $10 million per season for most of the past decade.

Even before Prescott’s injury, the Cowboys started slowly in coach Mike McCarthy’s first season last year. But Prescott was still leading the NFL in yards passing for the league’s No. 1 offense. Those numbers plummeted as Dallas lost its first four games without Prescott, falling to 2-7 on the way to a 6-10 finish.