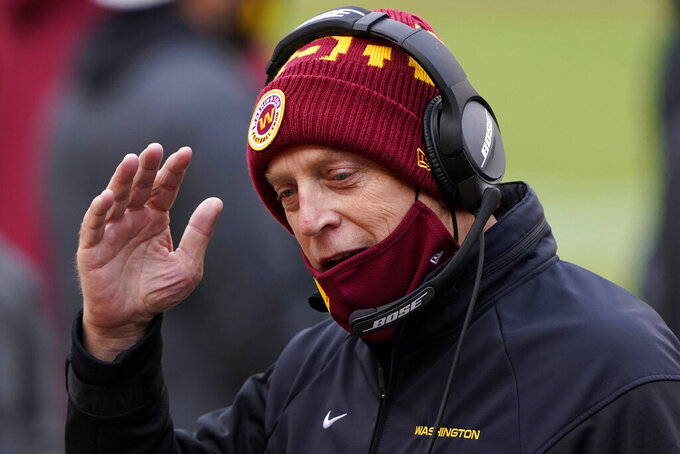 FILE - Washington Football Team defensive coordinator Jack Del Rio stands on the sideline during an NFL football game against the Seattle Seahawks, Sunday, Dec. 20, 2020, in Landover, Md. Jack Del Rio never made it to Las Vegas with the Raiders so his first game there will be as an opponent instead of head coach of the team he cheered for as a kid. That means Del Rio will be on the visiting sideline as defensive coordinator when Washington (5-6) takes on the Raiders (6-5) on Sunday, Dec. 5, 2021. (AP Photo/Mark Tenally, File)

Jack Del Rio never made it to Las Vegas with the Raiders, so his first game there will be as an opponent instead of head coach of the team he cheered for as a kid.

Despite being the most successful Raiders coach in nearly two decades, Del Rio was fired by owner Mark Davis in 2017 about nine months after the team's planned move from Oakland was approved by the NFL.

That means Del Rio will be on the visiting sideline as defensive coordinator when Washington (5-6) takes on the Raiders (6-5) on Sunday.

Del Rio's early exit came despite being the only coach to lead the Raiders to the playoffs since the start of the 2003 season — and the fact he is only coach with a winning record with the franchise in the past 34 years.

But the Raiders slipped from 12-4 in his second season in 2016 to 6-10 the following year, and Davis made the decision to fire Del Rio and bring back Jon Gruden for a second stint. Del Rio's 25-23 record is the best of any Raiders coach since Hall of Famer Tom Flores was replaced following the 1987 season.

Gruden overhauled the roster so much that only quarterback Derek Carr, third-down back Jalen Richard and backup linebacker Marquel Lee are still Raiders who will play Sunday and also played under Del Rio.

But Gruden wasn't able to match Del Rio's modest success before resigning as coach earlier this season following the publication of his offensive emails from 2011-18. The Raiders haven't managed a winning season since Del Rio left.

They are hoping to change that this season and showed some positive signs last week when they snapped a three-game skid by beating Dallas 36-33 in overtime to remain in contention in the AFC.

“You would like to think this is the time to get hot,” Carr said. “We sure have done it the opposite in years past. Hopefully this is the time that we can really hit the ground running and get hot at the right time.”

The Raiders got a big lift last week from speedster DeSean Jackson, who was signed last month after Henry Ruggs III was released. After being targeted only once in his first two games, Jackson helped set the tone with a 56-yard TD catch on the opening drive that was his 34th career touchdown of at least 50 yards.

"I think that him being able to do that obviously gives us that stretch that we are going to need for everyone else to get active, too,” Carr said.

Coming out of the bye week, Rivera and offensive coordinator Scott Turner committed to the running game as a way Washington can help quarterback Taylor Heinicke and relieve some pressure on its defense. The team’s most recent victory against Seattle to extend the winning streak to three involved Washington running 43 times and winning the time of possession battle 41:40-18:20

“We really kind of found our footing,” Rivera said. “Let’s take advantage of what we do really well and let’s make sure because it’ll take a lot of pressure off of Taylor, which it has."

The Raiders' defense has been led by edge rushers Maxx Crosby an Yannick Ngakoue all season. Crosby leads the NFL with 71 QB pressures, according to Pro Football Focus, and Ngakoue ranks 11th with 46. Ngakoue has all eight of his sacks in the past seven games and has now at least eight in each of his first six seasons in the NFL.

McKissic's absence was expected after he was carted off late in the victory against Seattle on Monday night, but it's still a blow to the offense not to have a pass-catching option out of the backfield. Collins' injury came out of nowhere and takes one of the defense's biggest variables — a three-safety look with Collins playing more like a linebacker — out of the equation.

Daniel Carlson made all five field goal attempts last week, including a 56-yarder late in regulation and a 29-yard winner in overtime. Carlson has made a league-best six field goals in the last five minutes of regulation or overtime this season and has made 24 of 27 overall.