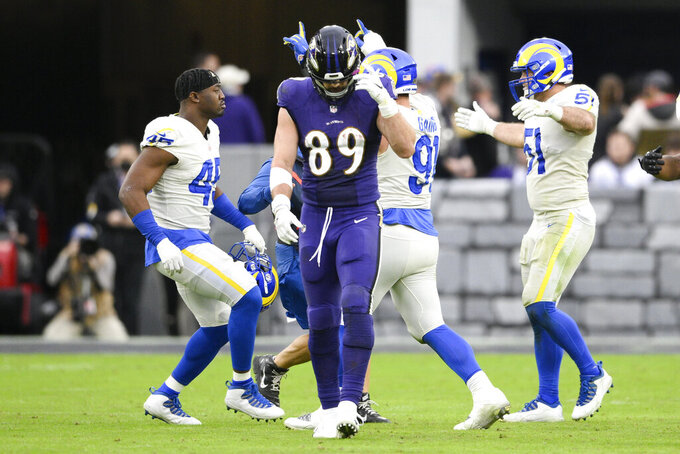 It seems like such an easy task: Simply snap the ball on time.

With their margin for error almost gone, every mistake is magnified for the Baltimore Ravens.

The Ravens were called for a crucial delay-of-game penalty on third-and-goal from the 4, and after settling for a field goal on that drive, Baltimore allowed the Los Angeles Rams to drive the other way for the winning touchdown with less than a minute remaining. The Ravens lost 20-19 on Sunday in a devastating blow to their postseason hopes.

“We had to play our best football, but we played a little bit under that,” said quarterback Tyler Huntley, who started because Lamar Jackson missed a third straight game with an ankle injury.

A week after allowing Cincinnati's Joe Burrow to throw for 525 yards, the Ravens (8-8) rebounded with an inspired effort on defense — and the Rams gave them plenty of help. Matthew Stafford threw two interceptions, the first of which was run back for a touchdown by Chuck Clark. Stafford also fumbled at the Baltimore 20 in the third quarter.

The injury-plagued Ravens didn't have as many big mistakes, but whenever they made one, it felt significant. Baltimore led 10-0 late in the first half when Huntley's deep pass was intercepted. The Ravens ended up with a 13-7 halftime advantage instead.

Baltimore was still up 16-14 in the fourth period, but with the Rams finally starting to click offensively, it felt like the Ravens needed a touchdown to feel safe. They had first-and-goal from the 5, then second-and-goal from the 2. A run by Latavius Murray lost 2 yards, then the Ravens cut it too close with the play clock.

“Not going against the ref, I just think they short-handed us right there,” Huntley said. “I was looking at the clock, I called for it with like one second left, the ball came.”

Huntley was sacked immediately after the penalty, and a drive that lasted 7:39 ended with a field goal. A five-point lead with 4:30 remaining wasn't enough, and everyone knew it. The Rams (12-4) converted a big fourth down and eventually went ahead on Odell Beckham Jr.'s 7-yard touchdown catch with 57 seconds to play.

Baltimore, once the leader of the entire AFC, has dropped five straight games, four of which were decided by two points or fewer. The delay of game was yet another agonizing moment in a season that is quickly slipping away.

“Thought the guys were physical, thought they played very hard,” coach John Harbaugh said. “Need to make a couple more plays, critical situations, would have turned the tide for us. We didn't get that done.”