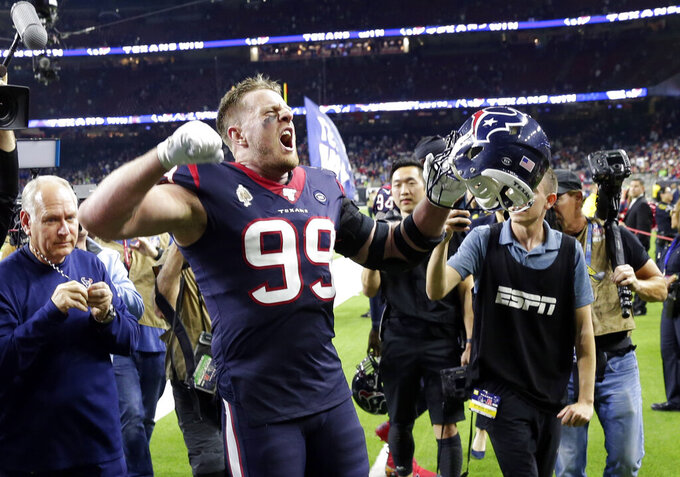 The Pro Football Hall of Fame is embarking on a difficult assignment: determining the All-Decade team of the 2010s.

Yes, there are some slam dunks on both sides of the ball and on special teams. There also are some real tough decisions to be made.

All-Decade teams are of value in assessing credentials for potential Hall of Fame candidates. They carry with them a significantly unfair element, though. Players who arrive in the NFL in the middle of a decade and last into the middle of the next decade are at a severe disadvantage for making such squads.

Consider Curtis Martin, who was inducted in the Canton, Ohio, shrine in 2012. He played from 1995-2005, rushing for at least 1,000 yards — usually much higher — in all but one season. He didn't make either All-Decade team, though. At least he had such overwhelming credentials that he made the hall.

On defense, look at Buffalo's Nate Odomes, one of the best cover cornerbacks from 1987-96 before injuries short-circuited his career. Not a sniff of an All-Decade roster for Odomes.

Still, selecting such teams makes sense. Why not honor the best of a decade, especially in such a team sport? In some ways, short of making the Hall of Fame, it's as big an honor as many offensive linemen and special teamers will ever receive.

There are a bunch of obvious choices for the team of the 2010s, of course. Tom Brady at quarterback. Adrian Peterson at running back. Joe Thomas at left tackle.

J.J. Watt on the D-line. Luke Kuechly and Von Miller as linebackers. Justin Tucker as the placekicker.

Rick Gosselin of Talk Of Fame Network, a Hall of Fame voter, makes a strong argument for the talented but disruptive Antonio Brown and the prematurely retired Calvin Johnson at wide receiver.

“Brown may have had his issues off the field but not on it,” Gosselin says. "He strung together six consecutive 100-catch seasons for the Steelers from 2013 through 2018. Brown led the league in catches twice, receiving yards twice and touchdowns once on his way to seven Pro Bowls and four All-Pro selections. As a bonus, he gave the Steelers four touchdowns on punt returns and another on a kickoff return.

“Megatron came out of Georgia Tech at 6-foot-5, 237 pounds with 4.29 speed — and played every bit to that size and speed in the NFL with the Detroit Lions. He set an NFL record with his 1,964 yards receiving in 2012 and also led the league in catches that season with 122. He strung together six consecutive years of 1,000-plus yards before retiring after the 2015 season at the age of 30. He went to the Pro Bowl all six of his seasons in the decade and was a three-time All-Pro.”

Yet others would argue for Larry Fitzgerald or Julio Jones.

"Jones made seven Pro Bowls in the decade and his average of 96.2 receiving yards per game ranks No. 1 in the history of the NFL," says Ira Kaufman of Fox 13 in Tampa and also a hall voter. “In the playoffs, Jones has been equally productive with 61 catches for 834 yards and six TDs in eight postseason games.”

Another Hall of Fame voter, Dan Pompei, chooses Rob Gronkowski as his tight end instead of Zach Ertz and Travis Kelce.

“There might not be an easier choice on the entire team,” Pompei notes. “No tight end came close to him in terms of impact. He created mismatches, he made big plays and he blocked. Oh, and he won three Super Bowls.”

John Clayton of ESPN 710 Seattle makes a case at placekicker and punter.

“On special teams, Ravens kicker Justin Tucker and Rams' Johnny Hekker dominated the decade,” he says. “Tucker is being looked at as one of the greatest placekickers in NFL history. Hekker edged out Thomas Morstead through the decade as the game’s best punter. Plus, Hekker is athletic enough to throw a few passes and keep opponents nervous about him making a first down. Both were undrafted players from 2012.”

Pompei weighs in for Devin Hester as the punt returner: “He might have been at his peak in the previous decade, but there was no one better than him in either decade. He scored seven of his career 14 punt return touchdowns and averaged 12.1 yards per punt return in the 2010s.”

Adding to the premise that you need not be a high draft pick to be at the top of a decade, Clayton presents his choices at cornerback.

“Richard Sherman, now of the 49ers, and Chris Harris of the Broncos proved you don’t have to be a first-rounder to be on an all-decade team,” Clayton says. “Sherman should edge out Stephon Gilmore of the Patriots or Darrelle Revis as the best outside cornerback of the decade. Harris was perhaps the best slot defender. Both came into the league in 2011. Sherman was a fifth-round pick, Harris was undrafted.”

Just how difficult it is to choose an all-decade squad is magnified by who made the 2000-2009 first-team roster — and who didn't.

Brady and his three Super Bowl rings ahead of second-teamer Peyton Manning. Randy Moss and Marvin Harrison at wide receiver over Terrell Owens and Torry Holt. Jonathan Ogden and Walter Jones ahead of Orlando Pace and Willie Roaf at tackle; all four are in the Hall of Fame.

Jason Taylor, a first-ballot inductee into the hall, on the second team behind Michael Strahan and Dwight Freeney. Troy Polamalu, who enters the hall this summer, behind Ed Reed and Brian Dawkins at safety.