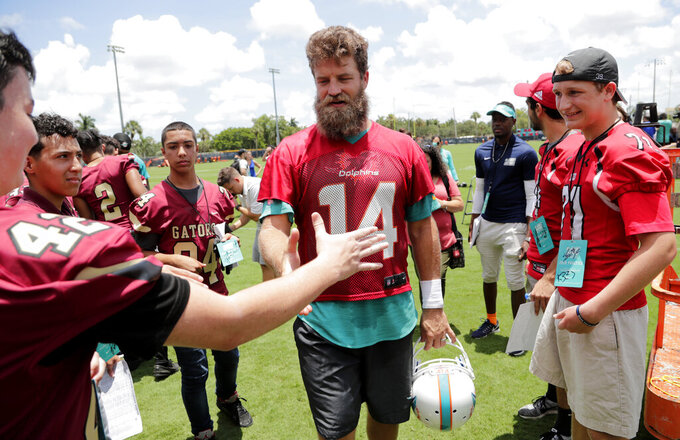 The long flight gave Flores a chance to reflect on how far the Dolphins are from such an occasion. Hired hours after coaching the Patriots' defense in the NFL title game, he's now four months into a rebuilding job in Miami.

"I have high expectations, so I'm always going to say we're behind," he said. "There are always two, three, four, eight things I feel like we could have done better. I do see some improvement. I see a lot of progress. Practice looks the way I want it to look, just from an operational and tempo standpoint. But I want to be at a higher level at everything. So no, we're not where I want to be."

Part of Flores' message has been that his standards will be high, which means he expects major improvement for a franchise that hasn't won a playoff game since 2000.

Progress probably won't come quickly. Oddsmakers give the Dolphins only a 200-1 chance to win the Super Bowl in Miami in February, and no team is a bigger long shot.

But the offseason practices provided cause for encouragement. Winning rave reviews were veteran newcomer Ryan Fitzpatrick at quarterback, injury-plagued DeVante Parker at receiver and first-round draft pick Christian Wilkins at defensive tackle. Players praised the culture established by Flores and his staff, and the team avoided any major injuries.

"I think it has been a very successful offseason in terms of the attendance, in terms of the attention to detail and the work," said Fitzpatrick, who is with his eighth NFL team and already a leader in the locker room. "It has not been perfect by and means, but I think we're headed in the right direction. I think everybody also understands the work that's in front of us, and the fact that we're not even close to being where we need to be."

Fitzpatrick's competitor for the starting job, Josh Rosen, received an offseason grade of incomplete — not a good word for a quarterback, but as anticipated. Rosen is still learning the playbook after being acquired from Arizona in April, and he declined to say whether his progress is on schedule.

"One of my favorite phrases is, 'If you set no expectations, you'll never be disappointed.' I don't really have any expectations," Rosen said. "I have good days and I've got bad days."

Fitzpatrick worked with the first team throughout offseason drills, but the quarterback competition won't begin in earnest until next month.

"It's so early that until we really get into the nitty-gritty of training camp and the preseason, it's just too early to say, 'This guy is a starter,'" Flores said. "First team, second team, I think I don't put too much stock into that. We're working everybody on the same plays. It's about execution. It's about fundamentals and technique. And if you do those things and you progress, then we'll see where guys fall."

Players are now off until training camp begins in late July. Fitzpatrick will head home to Arizona to spend time with his wife and seven children. Rosen plans to stay with his parents in Los Angeles and work out at his alma mater, UCLA.

For Flores, the break began with his New England reunion. He worked for the Patriots for 15 seasons.

"Good to see some old friends," he said. "I've built a lot of really good relationships up there."

He'll be back in his Dolphins office Friday, trying to figure out how to beat the Patriots when the teams meet in September.