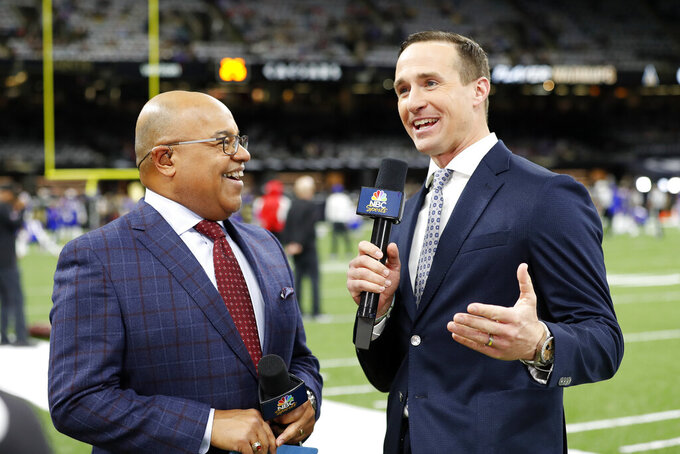 FILE - NBC Sports commentators Mike Tirico, left, and former New Orleans Saints quarterback Drew Brees broadcast from the field before an NFL football game between the New Orleans Saints and the Buffalo Bills, Thursday, Nov. 25, 2021, in New Orleans. Brees put his broadcasting career on hold after one year to spend weekends with his family. Going back to the booth or studio is always a possibility for the 13-time Pro Bowl quarterback who worked in a variety of roles for NBC last season. (AP Photo/Tyler Kaufman, File)

Drew Brees put his broadcasting career on hold after one year to spend weekends with his family.

Going back to the booth or studio is always a possibility for the 13-time Pro Bowl quarterback who worked in a variety of roles for NBC last season.

“I definitely feel like I walked away with a pretty good skill set if I choose to go back and do it,” Brees said on the AP Pro Football Podcast. “I think the world by which the fans consume the game is also changing. I think you see a lot of these alternative broadcasts that are taking place. … It’s really kind of an interesting way to watch the game and hear the game and learn about the game.”

Brees is intrigued by the possibility of doing something similar to Peyton and Eli Manning on the “ Manningcast.”

“From my perspective, I just watch a game totally different than probably most people,” he said. “It’s hard to just sit back and watch it as a fan. You’re so analytical with everything. You put yourself in the moment at all times. And I think that’s a really interesting perspective for fans to hear. I look forward to finding ways that that can be communicated in a much more in-depth way that’s kind of outside the norm or what is like the typical formula for broadcasting a game.”

Brees went straight from the field to the booth following a spectacular career in which he was a Super Bowl MVP and ranks second behind Tom Brady on the all-time list in both yards passing (80,358) and touchdown passes (571).

He was an analyst for Notre Dame games with Mike Tirico and was in the studio most Sundays for “Football Night in America.” Brees also called a Thanksgiving game and an AFC wild-card game.

“I definitely got exposed to a lot in a short amount of time and I learned a ton,” Brees said. “I think the group at NBC is absolutely first class and the best in the business and being able to have a chance to work with guys like Mike Tirico and Tony Dungy and Maria Taylor and that group on a daily basis was just awesome. So, I really enjoyed that and valued that time. I chose not to do that this year just because it did take up every weekend in the fall for me.”

Brees and his wife, Brittany, have three sons and one daughter from ages 8 to 13.

“These are just such valuable moments, and I’m coaching all the kids and they’ve got games on the weekends,” he said. “I just don’t want to miss any of those moments right now.”

Brady had no second thoughts about retiring following the Saints’ playoff loss to Brady and the Buccaneers in January 2021. He had surgery for a torn labrum in January 2006 after he tore the cartilage and dislocated his throwing shoulder in a game a week earlier. He knew eventually the injury would wear him down.

“It became a great struggle to be healthy enough to go out there and really perform at the highest level just with the limitations that I had,” Brees said about his final season in New Orleans. “I could dice you up inside of 40 yards all day long. But it became it harder and harder to do things downfield.”

The 43-year-old Brees isn’t surprised that Brady is still playing at 45. He recalls discussing it with the seven-time Super Bowl champion in 2014 when they were training with QB guru Tom House.

“If my arm wasn’t put together with 13 anchors, I’d play until I was 45,” Brees said. “And here’s Tom doing it because it takes a lot of commitment and sacrifice and not everybody could do it.”

While he’s spending a year away from football, Brees continues focusing of philanthropy. He’s part of Lowe’s Home Team, which includes seven other current and former players who are coming together with 8,000 fans and Lowe’s associates to tackle critical repair projects in NFL markets and communities in need.

Brees partnered with Lowe’s and Lowernine.org to complete a new sustainable work-live headquarters that will provide year-round, well-equipped, modern housing for visiting volunteers in the Lower Ninth Ward.

“It was really great, a really cool project,” Brees said. “ I just really appreciate Lowe’s commitment to these communities.”