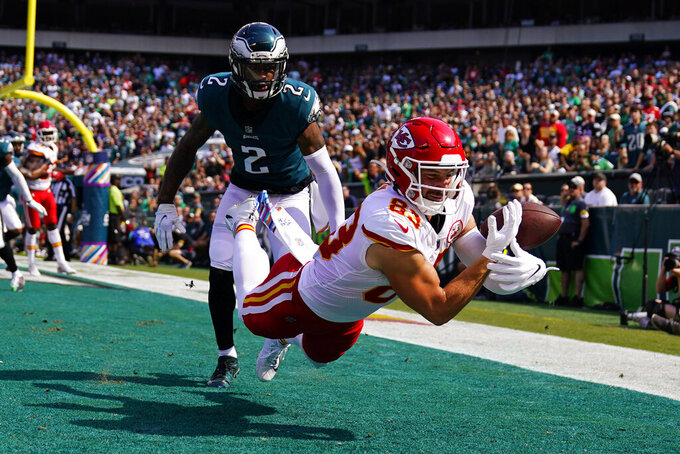 It’s uncertain when the lessons they’re learning will translate into wins.

After an impressive debut at Atlanta in Week 1, it’s been downhill for Sirianni and his rebuilding team.

The Eagles (1-3) have lost three straight games by an average margin of 12.7 points per game. They’re undisciplined, sloppy and struggling to overcome repeated mistakes.

“My job is to make sure this team is better in every aspect and penalties are an issue right now,” Sirianni said Monday. “Today, it was a little bit rougher conversation about how the penalties need to stop. ... We gotta get it fixed. We’re working and trying every approach we know to get it better.”

In Sunday’s 42-30 loss to the Kansas City Chiefs, the Eagles had three touchdowns negated by penalties. Those drives ended up producing six points instead of 21.

The Eagles are moving the ball well through the air, but just can’t finish off drives. Hurts has 713 yards passing in the past two games, though he accumulated a chunk of it in the fourth quarter after the outcome of both games was decided.

A defense that gave up a total of 23 points in the first two games hasn’t made many stops in the past two games against a pair of powerful offenses. The Eagles have allowed 83 points and 851 yards against the Cowboys and Chiefs.

Rookie wide receiver DeVonta Smith had seven catches for 122 yards. The 2020 Heisman Trophy winner selected with the 10th overall pick in the draft had 115 yards receiving in the first three games combined.

Six-time Pro Bowl defensive tackle Fletcher Cox had no tackles for the third time in four games. He has no sacks this season, five tackles, no hurries and recovered a fumble for a TD last week. Cox is in the fifth season of a six-year, $102.6 million contract.

“I know the stats aren’t there but he’s doing things to help us,” Sirianni said.

Three-time All-Pro center Jason Kelce is the last man standing again on the offensive line. Right tackle Lane Johnson was scratched Sunday because of a “personal” matter and Sirianni didn’t elaborate on the issue. Left tackle Jordan Mailata (knee) missed his second straight game, left guard Isaac Seumalo (Lisfranc) is out for the season and right guard Brandon Brooks (pectoral) is on injured reserve. Kelce was the only lineman who started all 16 games last season.

0 — The Eagles didn’t have to punt for the first time since Nov. 15, 1981, vs. Baltimore. They also didn’t force Kansas City to punt, allowing six TDs on seven possessions before the Chiefs took a knee for the final play.

The Eagles visit the Carolina Panthers (3-1) next Sunday. The Panthers were undefeated before losing at Dallas 36-28.