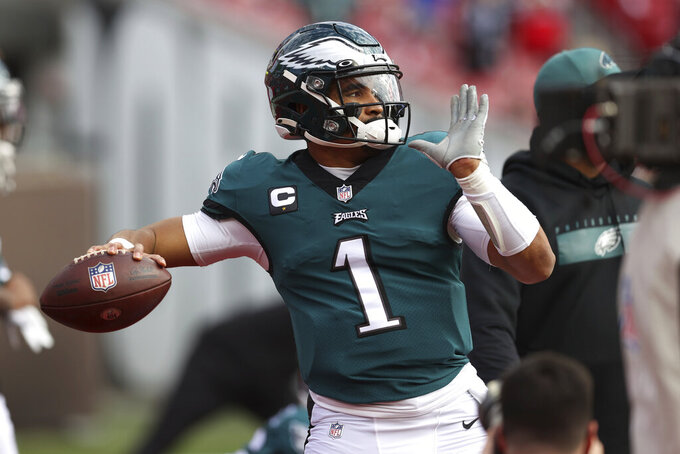 LAST YEAR: The Eagles recovered from a 2-5 beginning to make the playoffs in coach Nick Sirianni’s first season and quarterback Jalen Hurts’ first as the full-time starter in his second year. A former offensive coordinator, Sirianni scrapped his preferred playbook after the shaky start and turned to the running game with great results. The Eagles finished with a league-leading 2,715 yards and 25 TDs on the ground in 2021, with Hurts having team-best totals of 784 rushing yards and 10 rushing TDs. Philadelphia’s promising building season ended with a thud, though, in a 31-15 wild-card round loss at Tampa Bay in a game in which the Eagles gave up the first 31 points.

CAMP NEEDS: With Sirianni choosing a light offseason workout schedule, the Eagles offense will be looking to develop needed chemistry in training camp. This is especially true of Hurts and his new high-priced playmaker, Brown. While Philadelphia had success running the ball in 2021, the Eagles passing game ranked near the bottom of the league in several major categories. Hurts was 22nd in the NFL with an 87.2 rating and 26th with a 61.3 completion rate. GM Howie Roseman gave Hurts help on the outside by trading the No. 18 overall pick and a third-rounder in the 2022 draft to Tennessee for Brown, a 2020 Pro Bowler, who had 185 catches for 2,995 yards and 24 TDs in three seasons with the Titans. Brown, who signed for four years and $57 million guaranteed, will pair with promising second-year pro DeVonta Smith, who set a club rookie record with 916 receiving yards last season.

KEY CAMP COMPETITIONS: Brown and Smith are set as Hurts’ top two playmakers, and Sirianni has several options for the No. 3 receiver. Third-year burner Quez Watkins had a solid season last year with 43 catches for 647 yards. Competing with Watkins will be free-agent signee Zach Pascal, who will reunite with Sirianni. The 27-year-old Pascal caught 150 passes for 1,888 yards and 15 TDs in four seasons in Indianapolis, where Sirianni served as offensive coordinator from 2018-2020. Also in the mix is Jalen Reagor, the 2020 No. 21 overall pick whose subpar career has featured just 64 catches, three TDs and several game-changing drops.

EXPECTATIONS: With several big-name additions on both sides of the ball, the pressure will be turned up on Sirianni this season as the Eagles clearly have the pieces to contend in the NFC East. With 19 starts under his belt, Hurts now has the experience. With Brown, he also now has a bona-fide NFL wide receiver that should allow Sirianni to open up his playbook in 2022. Hurts will need to prove to NFL defenses that he can beat them with his arm as well as his legs while improving on his 2021 passing performance when he was 265 for 432 for 3,144 yards with 16 TDs and nine interceptions. Pairing Bradberry, a 2020 Pro Bowl selection who has 15 interceptions in 92 games, opposite four-time Pro Bowl cornerback Darius Slay gives the Eagles a strong secondary. Adding Reddick, who had 23½ sacks over the past two seasons, should provide a needed push up front after Philadelphia sagged to tied for 25th in the league with 31 sacks last season. Add it up and expectations are soaring for the Eagles.