Eagles have more questions than answers 9 games into season 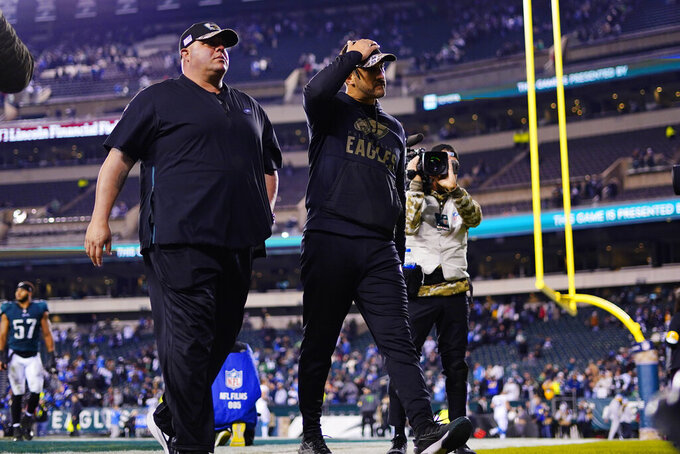 PHILADELPHIA (AP) — With a rookie coach learning on the job and a second-year quarterback in his first season as the full-time starter, the Philadelphia Eagles experienced typical growing pains in an inconsistent first half.

They’re 3-6 with more questions than answers at this point.

Nick Sirianni made a strong first impression in his debut as an NFL head coach. But since a season-opening 32-6 win at Atlanta, his game plans and play calling have been questionable.

At least, Sirianni has already mastered being accountable.

“First and foremost, whatever the issues are on this team offensively, defensively, special teams-wise, it all starts with me and me first,” Sirianni said Monday.

The Eagles still don’t know whether Jalen Hurts can be a franchise quarterback after 13 career starts, including the last four games of 2020. Hurts has shown flashes of excellence mixed with plenty of inconsistency. He’s a legitimate dual-threat player who plays with poise under pressure. But he also struggles with accuracy and seems to miss an open receiver for a big play once a game or more.

"You go against the best of the best in this league. When we have those opportunities, you have to take advantage of them. That’s something that I’ve learned in this young beginning time for me.”

The schedule eases for the Eagles over the final eight games, with four games against Washington (2-6) and the New York Giants (3-6) and one against the New York Jets (2-6).

“We have to play better. We have to coach better to be able to do that,” Sirianni said. “But I think you’ve seen us in a spot where when we’re playing consistent, we can play pretty well. But the consistency is not there right yet, consistently. That’s my job as a head coach to get it there, but I do believe we have everybody in this building we need to win this division and to win football games, to be able to move on.”

After putting too much of the burden on Hurts, Sirianni has turned to the run game the past two weeks. The Eagles ran for 236 yards in a 44-6 win at Detroit and had 176 more against the Chargers in a 27-24 loss Sunday. They’ve relied on veteran Jordan Howard, who was on the practice squad the first seven games until Miles Sanders was injured. Howard has 128 yards and three of the team’s six TDs rushing in the past two outings.

The pass defense has been awful most of the season. Five quarterbacks have completed at least 80% of their passes against the Eagles. Defensive coordinator Jonathan Gannon’s passive scheme has been criticized even by his own players. Six-time Pro Bowl defensive tackle Fletcher Cox spoke out against it last month.

First-round draft pick DeVonta Smith has 38 catches for 537 yards and two TDs. He had his second 100-yard receiving game against the Chargers. Smith is playing up to expectations after the Eagles traded up to select him at No. 10 overall.

Linebacker Alex Singleton began the season as the team’s top player at a weak position. His snap counts have gone down six straight weeks and he played just 10 defensive snaps against the Chargers.

Sanders will miss his third game this week. The Eagles lost left guard Isaac Seumalo for the season in September and three-time Pro Bowl right guard Brandon Brooks has been sidelined since Week 2 but is expected to return.

The Eagles visit the Denver Broncos (5-4) on Sunday. The Broncos have won two in a row including a 30-16 rout at Dallas, after losing four in a row.