Eagles look to rebound and continue dominance over Jets 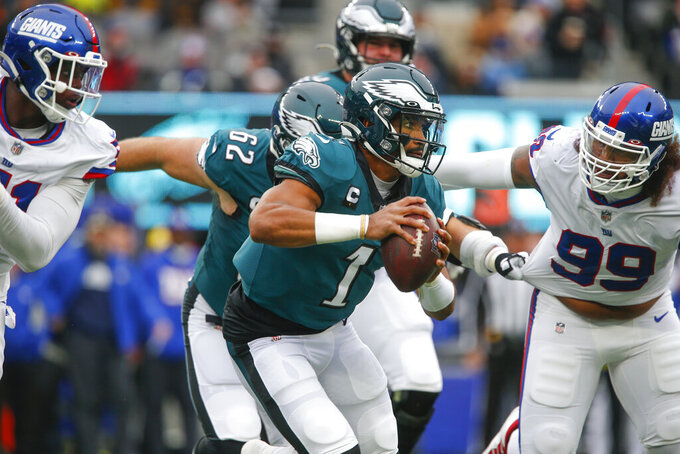 BETTING LINE: Eagles by 6 1/2, according to FanDuel SportsBook.

TURNOVER DIFFERENTIAL: Eagles minus-1; Jets minus-15.

EAGLES PLAYER TO WATCH: WR DeVonta Smith. The rookie is tied for the fourth-most receptions of 20-plus yards since Week 4 with 11. He has 48 catches for 686 yards and four TDs in 12 games.

JETS PLAYER TO WATCH: QB Zach Wilson. His return from a four-game absence because of a sprained knee was underwhelming in the first half, going 6 of 12 for 44 yards and an interception at Houston. But the rookie was efficient in the second half while leading the Jets to a comeback win.

KEY MATCHUP: Eagles running game vs. Jets run defense. Philadelphia has run all over teams this season, with QB Jalen Hurts leading the way and Miles Sanders, Boston Scott, Jordan Howard and Kenneth Gainwell all providing some punch in the backfield. New York, meanwhile, struggled against the run for much of the season before allowing just 3.70 yards per carry in the last two games — down from 4.71 yards per carry through Week 10.

KEY INJURIES: Hurts (ankle) and Scott (illness) were questionable for the Eagles, although Hurts insisted he'd be ready to go. ... Howard was ruled out for the second straight game with a knee injury. ... Sanders (ankle) and C Jason Kelce (knee) were full participants at practice Friday and will play. ... RG Jack Driscoll is out for the rest of the season with a high ankle sprain. Nate Herbig will likely start in his spot. ... Jets WR Keelan Cole and backup QB Mike White will both miss the game while on the COVID-19 list. ... WR Corey Davis was listed as questionable after missing last week with a groin injury. ... DT Sheldon Rankins (knee) was doubtful.

SERIES NOTES: The Eagles have dominated the all-time series, having won all 11 meetings. Philadelphia is the only team the Jets have never defeated. ... The teams' first meeting came on Dec. 9, 1973, when the Eagles' John Outlaw intercepted Al Woodall's pass and returned it 45 yards for the go-ahead score in the third quarter. Bobby Howfield kicked a field goal in the fourth quarter for New York, but the Jets fell 24-23. ... In 1993, the Jets had leads of 21-0 and 28-14, and the Eagles lost Randall Cunningham to a broken leg. Bubby Brister stepped in and led Philadelphia back to tie it at 28. New York took a 30-28 lead in the fourth quarter on a safety, but Eric Allen returned an interception of Boomer Esiason's pass 94 yards late in the game for the winning score. ... The Jets were 1-13 when they faced the Eagles in 1996 and took a 20-7 lead into the fourth quarter. Ty Detmer threw TD passes to Chris Jones and Irving Fryer to lead Philly to a 21-20 win. ... In 2011, the Jets were 8-5 and coming off consecutive AFC championship game appearances when they were routed the Eagles 45-19 in Philadelphia. New York didn't win another game that season, which began what is currently the NFL's longest active playoff drought.

STATS AND STUFF: The Eagles are 4-3 on the road and play at MetLife Stadium for the second straight week after a poor performance in a loss last Sunday to the Giants. .... Philadelphia has scored more than 40 points in multiple games this season for the first time since 2017. The Eagles have scored 30-plus points five times. … The Eagles have 1,078 yards rushing in the last five games. They’ve rushed for 200-plus yards in three straight games for the first time since 1978. They’ve had 175-plus yards rushing yards in five straight for the first time since 1950. ... Philadelphia has 18 rushing TDs this season, the most it has gotten through 12 games since 22 in 1953. ... Hurts threw three interceptions last week after he only had five in the first 10 games. ... Hurts has run for more than 50 yards in six consecutive games, the longest by an Eagles QB since Cunningham did it six times in a row in 1990. It’s also the longest streak by an Eagles player since RB DeMarco Murray in 2015. ... DT Javon Hargrave already has a career-high seven sacks. ...Kelce will make his 118th consecutive regular-season start, the longest streak by any NFL center since Chris Myers started 123 in a row from 2007-14 for Denver and Houston. ... The Jets have already surpassed their win total from last season, when they went 2-14. ... Wilson finished 14 of 24 for 145 yards against Houston, and had a touchdown scramble. He played through some soreness in his right knee, but was not limited at practice this week. ... RB Austin Walter had one career carry entering last week. The former Rice standout was elevated from the practice squad and had 38 yards and a touchdown on nine attempts in his Jets debut. ... RG Alijah Vera-Tucker, the No. 14 overall draft pick in April, has allowed one sack in 466 pass-blocking snaps. ... New York allowed 202 total yards to the Texans, the fewest it's given up since 2018. ... DE John Franklin-Myers had two sacks and an interception, becoming the franchise’s first player to accomplish that feat since Lance Mehl in 1985. He has six sacks this season, making him the first Jets D-lineman with at least six and an INT since Muhammad Wilkerson in 2013.

FANTASY TIP: Jets rookie WR Elijah Moore had a four-game TD streak stopped last week in Wilson's return, but he still had eight targets and finished with an underwhelming four catches for 46 yards. He and Wilson are continuing to build chemistry, and the likely return of Davis to the Jets' receiving corps could create some more opportunities for Moore to get open.