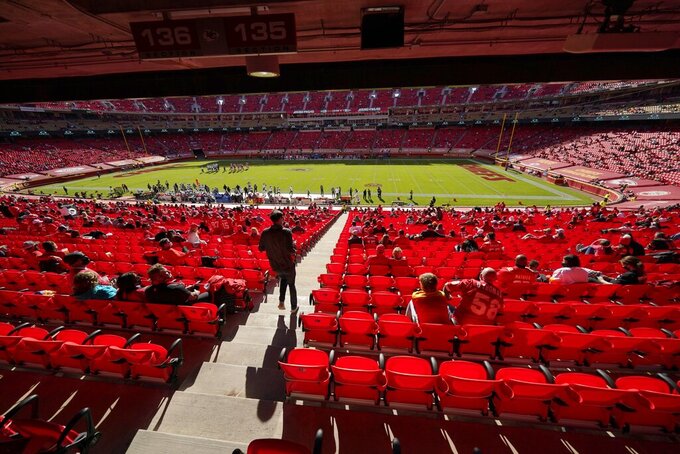 A limited audience at Arrowhead Stadium watch as the New York Jets play the Kansas City Chiefs in the second half of an NFL football game on Sunday, Nov. 1, 2020, in Kansas City, Mo. (AP Photo/Charlie Riedel)

KANSAS CITY, Mo. (AP) — Now that Election Day is over, Patrick Mahomes can turn his focus back to the football season.

Well, sort of over.

As the nation awaited final results in several battleground states Wednesday, the quarterback of the Kansas City Chiefs still could rest well knowing he did his part to ensure people of Kansas City had a chance to let their voices be heard.

Mahomes was a major factor in turning Arrowhead Stadium into a polling place Tuesday, going so far as footing half the bill to help cover the cost of 40 voting machines and other necessities that allowed people of Jackson County to vote there.

“I think Arrowhead ended up being a great spot for people to come together, go out and get your vote — a great place where everything was ran well,” Mahomes said Wednesday. “Hopefully we can continue to do that.”

The Chiefs spent plenty of time discussing the election, both formally and informally, and Mahomes said it was invaluable to learn the thoughts, opinions and what was important to everybody else in the locker room.

“You have those conversations because you have people that come from different backgrounds, different areas of the country,” he said. “You talk and listen and get different perspectives. We try to keep out of the politics because it can be so divisive, but we want to be understanding no matter who you vote for.”

For some voters in Jackson County and neighboring Clay County, that turned out to be Mahomes — he was the write-in vote for president on several ballots. Alas, the 25-year-old Mahomes won't meet the age requirement for another decade.

“Maybe later I'll think of a slogan or something like that,” Mahomes said.

Tyrann Mathieu and several other members of the Chiefs also were instrumental in getting out the vote, and their activism within the community was embraced by the organization rather than bemoaned as a potential distraction.

It sure didn't seem as if Mahomes was distracted. He threw for 416 yards and five TDs last Sunday against the Jets.

Chiefs coach Andy Reid was among the first to cast his ballot at Arrowhead Stadium on Tuesday.

“They set it up with being here, so they've been in touch with this thing the whole training camp and so on, so that was kind of their baby right there, putting it together,” Reid said. “I alerted them that (Tuesday) would be a day off, not that they didn't know that, and we just went from there. Everyone do their business and take care of what they had to take care of.”

While the rest of the nation anxiously awaits the results of the presidential election, the business for Mahomes and the rest of the Chiefs swings back to preparation for Sunday's game against Carolina. The Chiefs are coming off a sound thrashing of the winless New York Jets while the Panthers have lost three straight games.

NOTES: DE Frank Clark did not practice Wednesday because of a swollen knee, though Reid said he should be “OK as we go.” RT Mitchell Schwartz (back) also remained out. ... WR Sammy Watkins (hamstring), fullback Anthony Sherman (COVID-19 protocol) and CB L'Jarius Sneed (broken collarbone) also returned to work. ... OL Martinas Rankin (knee surgery) is in the third week of his 21-day window to be activated. “He's getting there. He's real close,” Reid said. “He had no camp. This is the first football he's had the last couple weeks. It's good for him to get in there and bang it around a little bit on the scout team, so that's what he's doing." ... RB Clyde Edwards-Helaire spoke for the first time since the Chiefs signed two-time All-Pro Le'Veon Bell, and he mentioned that Bell called him before signing. “It's a respect thing. That's kind of a man-to-man thing,” Edwards-Helaire siad. “Honestly straightforward, it was just respect.”