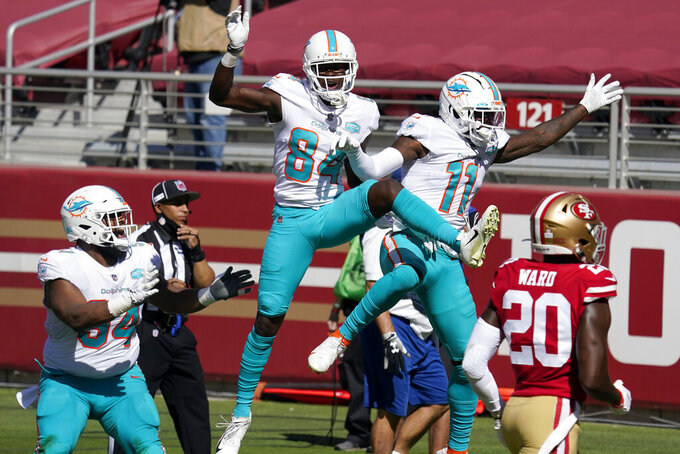 Fitzpatrick connected on a 3-yard TD pass to Adam Shaheen on the opening drive of the game for the Dolphins (2-3) and didn’t let up, quieting talk for at least another week that rookie Tua Tagovailoa should take over as starter.

The 49ers (2-3) are the team with questions at quarterback after Jimmy Garoppolo got pulled at halftime after throwing two interceptions. Garoppolo had missed the previous two games with a sprained ankle and never looked comfortable against a defense that entered allowing the most yards per dropback in the NFL.

C.J. Beathard replaced Garoppolo at the half and threw one TD pass but it wasn’t enough to keep the Niners from falling again at home. San Francisco is 2-0 this season at MetLife Stadium with blowout wins over the Jets and Giants but has lost all three games at home.

The Dolphins dominated on both sides of the ball with five sacks, three takeaways and a nearly perfect performance from Fitzpatrick.

He converted on deep strikes for TDs to DeVante Parker and Preston Williams and led the Dolphins to their highest scoring road game since 1986.

Dolphins coach Brian Flores didn’t get conservative even with a big second-half lead. With Miami facing a fourth-and-1 in its own territory in a 30-14 game, Flores called for a fake that Clayton Fejedelem converted with a 1-yard run on a direct snap. Fitzpatrick capitalized on that with a 32-yard TD pass to Williams.

Jason Sanders kicked three field goals in the final two minutes of the first half, something that hasn’t been done since at least 2000. He made a 26-yarder with 2:00 remaining to give Miami a 24-7 lead. Garoppolo then threw interceptions to Bobby McCain and Xavien Howard on the next two drives to set up kicks from 50 and 29 yards.

With the Niners down starting cornerbacks Richard Sherman, Emmanuel Moseley and K’Waun Williams, the Dolphins took advantage of fill-in Brian Allen. He was promoted from the practice squad Saturday and struggled from the start, allowing a 47-yard pass to Williams on the opening play. Fitzpatrick repeatedly threw his direction and drew a pass interference call and beat him on a 22-yard TD pass to Parker that made it 21-7 in the second quarter.

Allen was then pulled on the next possession for Ahkello Witherspoon, who was active despite a hamstring injury.

49ers: DT D.J. Jones left in the first half with an eye injury.

Dolphins: Host Jets on Sunday in a game that was rescheduled from Week 10 as the NFL juggles the schedule because of the coronavirus.