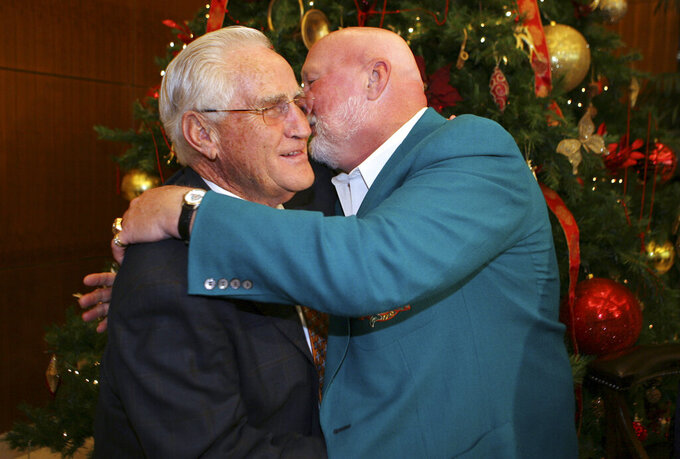 FILE - In a Jan. 2, 2010 file photo, former Miami Dolphins head coach Don Shula, left, gets a hug and kiss from former NFL football player Bob Kuechenberg during Shula's 80th birthday party at the Land Shark Stadium in Miami. Former Miami Dolphins guard Kuechenberg, a six-time Pro Bowl selection and member of the only team to achieve a perfect season, died Saturday, Jan. 12, 2019. He was 71. His death Saturday was confirmed by the Dolphins, who had no further details. (AP Photo/Jeffrey M. Boan, File) 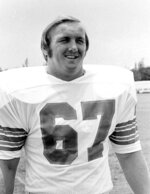 His death Saturday was confirmed by the Dolphins, who had no further details.

Kuechenberg joined the Dolphins as a free agent in 1970, coach Don Shula's first season, and played for them until 1983. He started every game for the team that went 17-0 in 1972, and started 16 games for the team that repeated as Super Bowl champions in 1973.

Kuechenberg was a finalist for the Pro Football Hall of Fame and a member of the Dolphins' Honor Roll.

"I was sorry to learn of the passing of Bob Kuechenberg, who was not only one of the best players I ever coached but one of the toughest as well," Shula said in a statement. "He was one of the key performers on our championship teams."

Shula said Kuechenberg played with a broken arm in the 1974 Super Bowl and still dominated Hall of Fame defensive tackle Alan Page as Miami beat Minnesota 24-7. That game was 45 years ago Sunday.

Former teammate Jim Langer, a Hall of Fame center, said he stayed in touch with Kuechenberg, spoke with him in the past week and was shocked to learn of his death.

"He was the kind of guy you'd want in your foxhole," Langer said. "He played hard and was very intense about the game, which was typical of our team. He was my roommate for 10 years, and we talked football damn near all the time."

A native of Gary, Indiana, Kuechenberg played at Notre Dame before being drafted by the Philadelphia Eagles in 1969 but never played for them. Kuechenberg's 196 games with the Dolphins was a team record until Dan Marino broke it.