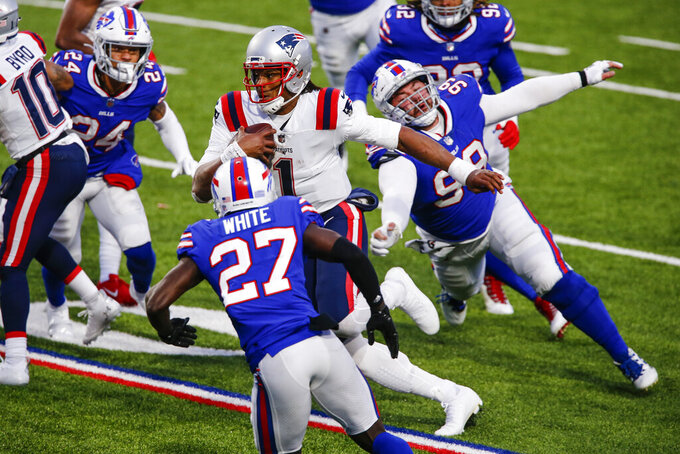 ORCHARD PARK, N.Y. (AP) — Among the constants through New England’s near two-decade-long run of dominance of the AFC East was the Patriots’ ability to beat the Buffalo Bills.

On Sunday, in a measure of how an injury and talent-depleted team appears to be in freefall, the Patriots could only beat themselves in a 24-21 loss on Sunday.

Just when it appeared as if the Patriots were going to pull out another in a long line of victories over Buffalo, quarterback Cam Newton had the ball punched out of his arms by Justin Zimmer, and the fumble was recovered by safety Dean Marlowe at the Bills 13 with 31 seconds left.

“It’s unacceptable on my part,” Newton said. “At the end of the day, you just measure it by wins and losses. I didn’t get the job done today.”

In a sign of how the tables have turned, the division-leading Bills having opened a 3 1/2-game margin over the Patriots. New England is even behind Miami (4-3).

Buffalo snapped a seven-game skid against New England, and beat the Patriots for just the sixth time in 41 meetings since coach Bill Belichick arrived in Foxborough in 2000.

As for Newton, he was unable to replicate the string of success his predecessor, Tom Brady, had over the Bills before departing for Tampa Bay this offseason. By going 32-3 against Buffalo, Brady set the NFL record for most wins against one opponent.

Brady’s departure, combined with the Patriots missing key players who are either sidelined by injuries or have opted out for COVID-19 reasons, places New England’s run of 11 consecutive division titles and 19 straight winning seasons in jeopardy.

“This is the third time we’ve been in this situation this year, and unfortunately haven’t been able to make enough plays to win” Belichick said. “We had our opportunities. We just got to be able to do a little more with them.”

What’s more troubling is how the Patriots aren’t just losing the one-score games this season, as happened against Seattle and Denver. They’ve also been routed twice, including a 33-6 loss to San Francisco last weekend, which stood as the largest margin of defeat at home since Belichick arrived in Foxborough in 2000.

Add it up and New England (2-5) is off to its worst start to a season since 2000. The Patriots have lost four straight, matching their worst slide since 2002.

“I’m frustrated. The team’s frustrated. We just got to better. There’s no other way to say it. We just gotta do better,” said running back Damien Harris, who had 102 yards rushing, including a 22-yard touchdown.

“We’re in in tough spot and we’ve dug a hole. But it doesn’t mean we can’t dig ourselves out. It doesn’t mean our season’s over,” Harris added. “If we don’t believe in each other then we don’t have a chance.”

If there was a bright side, Newton finished 15 of 25 for 174 yards and added 54 yards rushing and a touchdown, with the fumble his lone turnover. That was an improvement from his previous two outings in which the 2015 NFL MVP combined for five interceptions, including three against the 49ers.

“Cam’s our quarterback. That’s the way it’s been all year,” Belichick said in backing Newton.

As for the fumble, the coach was blunt in saying: “How do you think we felt?”

“I feel like we’re trending in the right direction. Hopefully we can keep building on it,” Meyers said.